Making the Difference:
Inspiration in the Central African Republic
By Robert Newell 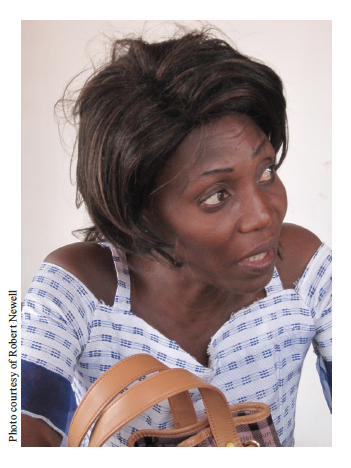 I met an extraordinary woman in Bangui, Central African Republic (CAR). Her name is Marie-Blandine Songuelema Yakondji, and she is one of only 10 licensed female attorneys in the whole country. In a professional context, her name is preceded by the title Maitre , roughly equivalent to our Esquire .

Blandine, as she is known, is the president of the Association des Femmes Juristes de Centrafrique, known as the AFJC, and she has used that position to accomplish some remarkable things in a very challenging context.

CAR is one of the poorest countries in the world and it is in a tough neighborhood — South Sudan to the east, Sudan to the northeast, Chad to the north, Democratic Republic of the Congo and Congo (Brazzaville) to the south and Cameroon to the west. It is landlocked, scores low on most human development indicators, has poor infrastructure, wrestles with a legacy of armed conflict, poor governance and corruption and is poor beyond the comprehension of the average Westerner.

CAR is a country with very rigid gender roles. Men are considered to be the wage earners and the official heads of household with the decision making power concerning finances and child-rearing. Women are typically assigned all domestic tasks, such as water and wood gathering, food preparation and child care, have very low earning power relative to men and often are not allowed to share in the decision making process at home. Approximately 68 percent of women are illiterate (compared with 35 percent of men), and very few women have an understanding of their rights under Central African laws. It is not uncommon to hear men describe women as “weak.”

It is not surprising then, amidst this poverty, that sexual and gender-based violence would be a reality for many Central African women and their families. It is in this very challenging milieu that Blandine has worked as an attorney on issues of women’s rights and social justice.

She was aware of the pervasive problems women face here, particularly in terms of understanding their rights and having access to good legal representation, and she wanted to do something about it. She decided to go to law school to become an attorney. Following her graduation, she passed the national bar in CAR, completed her apprenticeship and became a licensed attorney. There are only 108 attorneys who have passed the national bar in CAR (approximately 40 of these attorneys are at the apprenticeship stage), and, as you can imagine, they do not lack for work. With few lawyers relative to the total population of CAR (estimated at 5 million), they do not have the luxury of specialization. They all get appointed to represent criminal defendants, handle civil matters, write wills and engage in the variety of legal matters that an American lawyer might handle. Blandine likewise began her legal career working on such a diversity of matters but later decided to focus on issues related to social justice for women and children.

As president of the AFJC, she and the AFJC have worked with Mercy Corps to establish four counseling centers (“Centre d’ Ecoute”) where survivors of sexual and gender-based violence can go for legal assistance and psychosocial support. The centers are supported with funding from the Common Humanitarian Fund, the U.S. State Department and the European Union. The first center was opened in April 2010, and the others followed between July and September 2010. Survivors receive psychosocial services, legal assistance if they request it, referrals for medical care, as well as assistance with immediate hygiene needs and emergency food or shelter as needed. Each center is staffed with a legal counselor and a psychosocial counselor who provide all services to survivors free of charge.

When survivors opt for legal services, particularly in cases of abandonment or lack of child support, the legal counselor will usually begin with mediation when the survivor requests it. If mediation fails, the legal counselor will pursue legal action if the survivor decides to go to court. Most survivors opt first for mediation to avoid confrontation with their communities and families and also to mitigate the risk that their main source of economic support, namely their partners, will be jailed. As the AFJC contact and coordinator for the project, Blandine will represent the survivors in court where they have chosen to pursue legal action, providing guidance for survivors in a complicated court system that few of them understand.

She and her colleagues have come to realize that frequently the root of social injustice towards women lies in their lack of knowledge and understanding of their rights and lack of decision-making power, both in their relationships with their partners and within their communities. To address this issue, Mercy Corps and AFJC have developed income-generation activity programming for survivors at the counseling centers to enable survivors to develop basic financial and small business skills that will allow them to start up and maintain a small business as an independent source of revenue. By offering survivors means to achieve economic independence, survivors can begin supporting themselves and their families.

AFJC has also worked hard to educate communities and authorities about the problem of sexual and gender-based violence. AFJC has worked with Mercy Corps to offer local authorities, police and justice officials, and health personnel training on sexual and gender-based violence, how to interact with and receive survivors, how to treat them with compassion and confidentiality, and how to get them the help they need.

The program has grown significantly as it has become better known since its inception in 2010. Currently, staff at all four centers handle about 150 cases a month and their numbers continue to grow.

Blandine could make a lot more money with a traditional law practice. She still does other legal work, but this program occupies much of her time, for which she receives only a small monetary stipend but big professional and personal rewards.

As a licensed attorney, she has already overcome significant barriers that women face in CAR to higher education and entry into a largely male-dominated legal profession. When she started working on women and children’s rights issues, many of her fellow (male) attorneys laughed at her. Now, however, they seek her advice when they face such issues in their practices and have come to recognize her contribution to Central African society.

Given such a challenging context in CAR, Blandine is an inspiring example of the difference an attorney can make.

ABOUT THE AUTHOR
Robert Newell, who practices in Portland’s office of Davis Wright Tremaine, serves as treasurer of Mercy Corps.