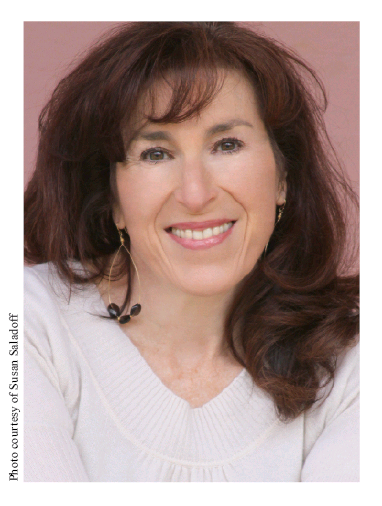 For 25 years, Ashland’s Susan Saladoff was a successful personal injury plaintiff attorney specializing in medical malpractice. Her work was gratifying, but she wanted to find some way to reach more people with what she felt was an important message.

That message was this: Saladoff says the so-called “tort reform” movement has systematically chipped away at the average person’s right to legal redress after harm or injury. Citizens were unaware that their access to the courts and a jury trial were being taken away by corporate interests intent on restricting what they claimed were “frivolous” lawsuits.

After she began what she expected would be a short sabbatical from practicing in 2009, Saladoff determined that the time was right to produce a film that would lay bare the truth as she saw it. What resulted was a highly successful documentary called “Hot Coffee,” which has proven both a critical and popular hit and has been shown all over the world. The adjective most commonly attached to it by viewers is “eye-opening,” she says.

Premiered at the 2011 Sundance Film Festival, it was then sold to HBO and made into a DVD, and Saladoff has been showing the movie at film festivals and public viewings much of the time since its release. She also has been interviewed by The New York Times, National Public Radio, “The Colbert Report” and numerous other media. Both the documentary and Saladoff have received several awards for “Hot Coffee,” including a 2012 Television Academy Honors award given by the Academy of Television Arts & Sciences (which bestows the Emmy Awards), which the academy describes as exemplifying “television with a conscience.” The picture also has won “Best Documentary” in film festivals in Seattle, Tampa, Fla., and Albuquerque, N.M. In October, the American Board of Trial Advocates and the National Association of Consumer Adovcates gave Saladoff their media awards.

“I knew I had something to say,” she explains. “I’ve always been an advocate for the civil justice system, which is my passion — to keep the courthouse doors open, making products safe and water clean. All those things were the core of why I became a lawyer.”

Saladoff, who was listed in Oregon Super Lawyers from 2006 through 2010, says she won some of the largest malpractice cases in her county and even in the state, but she still saw the need to get the word out.

She loved the work, “but I knew it was difficult for the plaintiff to win any case,” primarily because expensive public relations campaigns had convinced jurors and the public that injury victims were taking advantage of the system, she says. She sought through the film to explain in a compelling way how capping awards, and targeting re-election of judges who were perceived as sympathetic to plaintiffs, have eroded Americans’ rights.

The origin of the film’s title will ring a bell for most attorneys, and in fact, Saladoff says the case on which the name is based is from the lawsuit that is one of the most familiar of any other to the average person: the 1994 verdict against McDonald’s after a woman spilled blistering-hot coffee on her lap. But the film goes well beyond that particular case — which comprises only the first 15 minutes of screen time — and Saladoff points out that she originally did not even intend to include the case in the documentary, let alone name the film after it.

“As trial lawyers, we’re told to stay away from the McDonald’s case, because people will always wave that case as the example” of what’s wrong with the justice system. She had planned to call the film “DisTorted: Has Justice Been Sold,” but she realized that most lay people don’t know what a “tort” is as a legal term.

After attending a Sundance festival “to see what works,” Saladoff concluded that she would title and open the picture with the McDonald’s case — not only because it was so well-known, but also because very few people, including attorneys, fully understand the actual facts behind that case, which were utterly different from what most media and commentators portrayed. (The best way to find out how to view the film, and the various means to do so, can be found at www.HotCoffeethemovie.com.)

A major reason for this misconception perfectly illustrates some of her primary points in the film. It rebuts groups such as the U.S. Chamber of Commerce’s Institute for Legal Reform, which describes itself as “the only national legal reform advocate to approach reform comprehensively, by not only working to change the laws, but also changing the legal climate.” Such organizations have purposely spread misinformation to manipulate public opinion by portraying unworthy plaintiffs as greedy, the movie charges. Saladoff says what she calls industry-sponsored “front groups” with appealing-sounding names distorted the truth behind the McDonald’s and other cases by disparagingly referring to them as “jackpot justice.” She says she made the film because the public was hearing only one side of the story.

A native of Philadelphia, where she was raised, Saladoff harbored several ambitions and interests that weren’t necessarily congruent. She studied biochemistry with the intent to go into medicine, but graduated instead with a degree in history of science from Cornell University. She deliberately finished college a year early to allow her time to take off before entering law school — in order to sing Broadway and pop tunes in a dessert cafe in New York.

“My dream was to become a Broadway star,” she recounts. “One of my passions is singing.” But she ended up spending just nine months working in that cafe, where she says all the servers there performed on the side. She then spent three months working in the district attorney’s office in Philadelphia, followed by the summer before law school serving as an intern on Capitol Hill, working for the Congressional Caucus for Women’s Issues, whose membership includes the female members of the U.S. House of Representatives.

With her fascination for politics further enhanced, Saladoff then completed her law degree at George Washington University Law School. She passed up a $50,000 offer from a Wall Street firm in 1983 to join Trial Lawyers for Public Justice, now known as Public Justice, as a public interest lawyer. That organization “was all about access to justice,” she says. “I grew up in that environment, already thinking about how you open the courts to average people.” Much later, in 2002, she became the group’s national president.

“Susan is an extraordinary person and lawyer,” says Arthur H. Bryant, executive director of Public Justice for nearly the past three decades, who has known Saladoff since he replaced her as the organization’s then-sole attorney after she left in the 1980s. “She is absolutely committed to advocating the cause of justice and to try to make sure that justice is done.”

Saladoff’s documentary became a way for her to educate as many people as possible about the “scary attempts of corporations to manipulate public opinion to deprive people of justice,” he says. “‘Hot Coffee’ has had an enormous effect on popular opinion. To people who know the facts and understand the importance of our civil justice system, Susan is a hero.”

Saladoff left Public Justice to work for five years in a private law firm in Rockville, Md., where she developed her specialty of handling medical malpractice cases. That was followed by a sole practice for a time in Maryland, then working with one other law partner in a firm in Washington, D.C. She and her family left the capital in 1998, seeking “a more livable place,” which they found in Ashland. There, she joined the law firm now known as Davis, Hearn, Bridges & Anderson, where she practiced until 2009 and began work on “Hot Coffee.” She was a name partner before leaving.

Saladoff had a little experience making movies prior to that, mainly some short films to show to juries. But the technical side of producing a full-length documentary and getting it placed in film festivals were completely new territory for her. “I learned every step of the way,” she says. However, she soon realized that the storytelling aspects of making “Hot Coffee” were similar to skills she already had developed as a trial lawyer.

“It turned out not to be that difficult,” she says. “I had to learn about editing, but the substantive part was not that different.” Characters appear in the film in the same manner as clients and expert witnesses, and archival footage like trial exhibits. “I did what I know.”

The results and public response were everything she had hoped for, though Saladoff admits that from time to time, she has to pinch herself. “I had an intention that the film do everything it’s done, but sometimes I think, ‘Did this really happen?’” The distribution the movie has enjoyed was “such a long shot,” and the selection odds for getting a film in Sundance were 16 out of 841, she notes. She can’t believe the fact that after being out nearly 18 months, the film is “still going so strong, and being used in high school and law school curriculums.”

Saladoff, who has never been a coffee drinker, says she doesn’t know what the future will hold, or whether she will resume practicing law. She says touring with the film is not a “moneymaking endeavor,” but if she weren’t doing it, “I wouldn’t be having nearly as much fun and making a difference in the world. What could be better than that?”