A Matter of Style:
About That Legal Writing
By Megan McAlpin 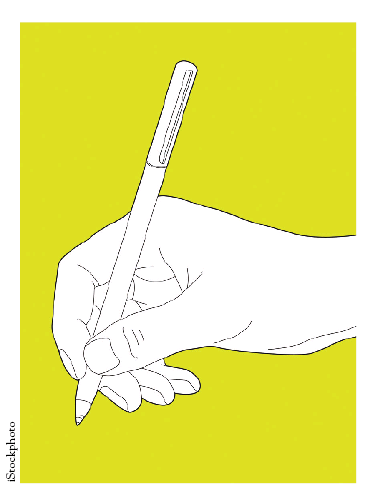 This morning, my 6-year-old daughter was writing a very sweet little note. And while she knew how to spell all the words, she was having some trouble deciding which letters needed to be capitalized. She would pause every now and again and ask, “Is the a capitalized here?” And I kept answering, patiently, until I realized that she didn’t really understand that a sentence typically gets only one capital letter. So I explained the rule.

And then I realized that I wasn’t entirely sure that one capital per sentence was a rule at all. As I looked at her heavily capitalized sentence, I suddenly realized that it might just be the way I’ve always done it. It might just be a matter of style. So, while I confidently advised her on this carved-in-stone grammar rule, I was also having the kind of self-doubting crisis that only a questioned-filled six-year-old can induce.

The English language is a tricky thing. Because, for all its rules, a lot of the questions a six-year-old (or any of us really) might ask aren’t actually covered by the rules. Instead, the answers to these questions are, “it depends” and “it’s a matter of style.” But those answers aren’t really all that comforting to a new lawyer writing for a curmudgeonly judge or supervisor. And those answers aren’t all that helpful to the mid-level associates who are collaborating on a brief and can’t decide whether to insert one or two spaces after each period.

Since the rules aren’t always black and white, you need a style guide. The Chicago Manual of Style is one of the most popular style guides. But there are also style guides, like The Redbook: A Manual on Legal Style, that are written specifically for lawyers. A style guide simply tells writers how to handle grammar and writing problems that are still unresolved. Style guides typically cover things like punctuation, spelling and formatting. I suppose there are a few lucky folks out there who were provided with a style guide upon entering their places of employment. But, for the rest of us, we have to find a way to navigate these murky waters without wasting a lot of time. Buying a style guide just might be worth it.

If you’re still not convinced that you need to rush out and purchase a style guide, the following are just a few unresolved issues that might convince you that having that style guide might come in handy after all. (For some great suggestions on grammar and style guides, take a look at “Five Tools for Writing Fixes: Stocking the Legal Writer’s Toolbox,” by Tenielle Fordyce-Ruff, OSB Bulletin, June 2010.)

Punctuation, it turns out, can actually be a matter of style. First, there’s the hotly contested debate about whether to use one or two spaces after a period. (Full disclosure: As I write this article, I’m inserting two spaces after each period. The editor of this column is probably going to take one of those spaces out.) Some people are adamantly on one side or the other. Other people simply do one or the other out of habit.

The problem, of course, is that there is no rule. Most style guides seem to encourage the use of a single period. In fact, even legal style guides suggest that two spaces after a period make sense only if you’re using a typewriter. Even so, some curmudgeons continue to insist that two spaces more clearly separate legal citations — themselves often filled with periods — from the text.

But the period is not the only punctuation mark that’s shrouded in scandal and controversy. The apostrophe has problems all its own. In fact, the apostrophe has even divided the U.S. Supreme Court. That’s right. In Kansas v. Marsh, 548 U.S. 163 (2006), the Court was making a decision about a statute from the state of Kansas. In his majority opinion, Justice Thomas made Kansas possessive by simply adding an apostrophe, referring to Kansas’ statute. Justice Souter wrote the dissenting opinion and made Kansas possessive by adding both an apostrophe and an –s, referring throughout to Kansas’s statute.

Which one is right? Well, it’s a matter of style. Some guides would side with Justice Thomas while others would side with Justice Souter. If you’re now asking, in a rather exasperated tone, “No really, which one is right?” know that I am just as exasperated and answering, “Neither. Both.” It’s a matter of style. I know what I do. But I also happen to know that several of my colleagues disagree with me. I suppose we’ve come to a sort of impasse, which is fine as long as we are all writing articles separately.

But, if we ever decide to collaborate, we’re going to have to come to some agreement. I suppose that means agreeing on a style guide, something that Justice Souter and Justice Thomas just might not have been able to do.

Spelling seems like one of those things that is either right or wrong. And, for the most part, spelling is pretty much black and white. But English words are often spelled differently in American English than they are in British English. Now, this distinction wouldn’t be difficult except that the two can sometimes mix.

For instance, in The Redbook, Bryan Garner advises that words that end with –ogue usually drop the –ue in American spelling. So, catalogue becomes catalog and dialogue becomes dialog. But he also advises that it’s never an error to retain the –ue and that, in fact, that’s the preferred spelling in legal writing. So, you could end up writing a letter to your client about a contract dispute concerning a catalog, then filing court documents in the same dispute about a catalogue.

Now the reality is that a dictionary will alert you to most of these spelling differences. Most dictionaries will tell you that it’s either dialogue or dialog. But a dictionary won’t necessarily tell you why. And that’s where a style guide can be helpful. It will alert you to the issue and help you to make a solid, informed decision about your writing. It might also help you to convince a co-author that you’re right (whatever that might mean).

But, while court rules should certainly be your default when writing to a court, they shouldn’t necessarily always be your default. For example, while many courts require double-spacing, many style guides will recommend single-spacing documents. There are relative advantages and disadvantages to both. Single spacing can be easier to read while double spaced documents are often easier to edit. As another example, many courts dictate the font style and size (e.g., Times New Roman 12), while some readers find nonserif fonts (the ones without the fancy tails on the tips of letters, like Calibri) or larger sizes easier on the eyes. The court will have a preference laid out in court rules. Take advantage of this easy way of knowing what your reader’s expectations are.

But, when you don’t have the advantage of knowing your reader’s expectations, see if there’s a way for you to find out anything at all about your reader or her preferences. Because readers and writers can be picky about matters of style and you never know when you might hit a nerve. So, try to read something she’s written or ask colleagues who have worked with him. Or, better yet, ask her what style guide she uses.

I happen to be very patient with my daughter’s capitalization quirks, but I feel pretty confident that if she comes home some day with liberal ideas about using their as a singular pronoun, I may have to set aside my feelings about the stylistic problems of clichés and give her the not as long as you’re living under my roof speech.

ABOUT THE AUTHOR
Megan McAlpin teaches legal research and writing at the University of Oregon School of Law. She also directs the law school’s clinics and externships program. You may contact her at mmcalpin@uoregon.edu, using your own style.