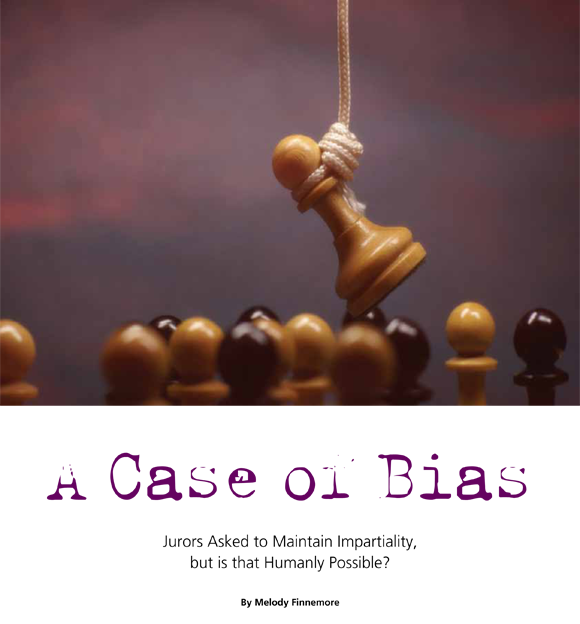 Many Americans who consider themselves of strong moral and ethical standing will shudder at the thought of prejudice, whether it’s against a group of a particular religion, ethnicity, gender, sexual orientation, income bracket or other segment of the population that differs from their own.

And yet, maybe we can’t help but feel biased against certain groups and, oftentimes, don’t even recognize it.

The Implicit Association Test (IAT) developed by Harvard University, the University of Virginia and the University of Washington seems to indicate that people truly can’t help but incubate some prejudice or another. These tests measure unconscious or “automatic” biases that, according to the studies, help form the basis of who we are as human beings.

“The ability to distinguish friend from foe helped early humans survive, and the ability to quickly and automatically categorize people is a fundamental quality of the human mind,” states Teaching Tolerance, a project of the Southern Poverty Law Center. “Categories give order to life, and every day, we group other people into categories based on social and other characteristics. This is the foundation of stereotypes, prejudice and, ultimately, discrimination.”

Phyllis Lee, Ph.D., a frequent diversity consultant for the Oregon State Bar and longtime leader of multicultural affairs and inclusion at Oregon State University, describes bias as an ingrained piece of the entire human thought process.

“I would call it a ‘blanket indictment’ because people can be biased in so many ways. It’s really important when we talk about bias that we start with the fundamental foundation — that all of us as human beings have,” Lee says.

She notes that bias in itself is not necessarily a bad thing. Simply defined, it is a mental inclination or a particular partiality toward something. “It depends on what someone is biased about and what they do with it,” Lee says. “It also depends on whether someone even knows they have a certain bias.”

So where does this inherent bias come into play in the courtroom? For jurors, it can range from positive or negative perceptions about the plaintiff, defendant and their attorneys to the judge, bailiff and other court staff. The most insidious damage occurs when jurors foster discriminatory feelings toward the attorney representing either the plaintiff or the defendant and then direct it — knowingly or unknowingly — toward that attorney’s client.

Turner v. Stime: A Case in Point
The issue of jury bias toward attorneys was a pivotal element in Turner v. Stime, a 2007 medical malpractice case in Spokane, Wash. The Turners, the plaintiffs, were represented by Mark Kamitomo in their lawsuit against Dr. Nathan Stime. After the all-white jury ruled in favor of Stime, two jurors came forward to report that during deliberations some of the jurors had mocked Kamitomo’s Japanese heritage by calling him “Mr. Miyagi,” “Mr. Kamikaze” and “Mr. Havacoma.” One juror claimed that making fun of Kamitomo seemed “almost appropriate” since it was Pearl Harbor Day.

Superior Court Judge Robert Austin, now retired, overruled the verdict and awarded a new trial because of jury misconduct, though he denied Kamitomo’s request to move the trial to Seattle in favor of a more diverse jury pool. Stime’s attorney, Brian Rekofke, appealed the request for a new trial. In 2009, the Fred T. Korematsu Center for Law and Equality at Seattle University School of Law filed an amicus brief supporting the motion for a new trial. Later that year, the Washington Court of Appeals upheld the trial court’s call for the new trial.

Along with the direct legal implications, Turner v. Stime ignited a broader discussion about jurors’ bias toward attorneys. A 2008 study published in the journal Cultural Diversity and Ethnic Minority Psychology found that an attorney’s characteristics often do have an influence on a jury’s perception and decision-making. For example, the study found, juries tend to take white lawyers more seriously than those of color, and an attorney’s perceived socio-economic status plays a role in the jury’s considerations as well.

Stereotypes Take Center Stage
A trio of Oregon legal professionals knows firsthand how bias has an impact on attorneys. Michael Wise, a Portland personal injury lawyer with a penchant for pinstriped suits, frequently encounters bias from jurors. In fact, he was involved in just such a situation when interviewed for this article.

“One of the jurors thought I was dressed too nicely, so I must be an ambulance chaser. I’ve had to deal with that and I do deal with that,” Wise says.

He asks jurors point blank what they think about lawyers – and specifically personal injury lawyers – along with questioning them about their impressions of how he is dressed. During a recent trial, Wise asked the jury if his pinstriped suit and monogrammed shirt led them to believe he is dishonest.

“One woman raised her hand and said, ‘Yeah, maybe,’ ” Wise says. “A lot of attorneys will completely change how they dress or what they drive so they don’t face that bias or discrimination, but I’m just not good at being something I’m not. I like dressing nice for work each day.”

Liani Reeves has battled a triple threat of biases over the years, starting with her decision to become a trial lawyer. Many questioned whether a young, Asian woman could be aggressive enough to be an effective litigator.

“I think it was most demonstrated when I looked at my male counterparts coming out of law school who also weren’t as aggressive and maybe had more of a thoughtful personality. That quality is often interpreted as being passive,” she says.

Reeves went to work for the Attorney General in the Oregon Department of Justice’s trial division and gained plenty of experience in both bench and jury trials, complete with adversarial litigation. She tried cases throughout the state and was a bit skeptical when she was asked to try a case in Malheur County.

“I was sort of scared that my race, ethnicity or gender might be an issue, but I was really kind of pleasantly surprised. The jurors took the case very seriously,” says Reeves, now general counsel for Gov. John Kitzhaber.

Reeves notes that while there still is much room for improvement, the increase in diversity among attorneys and judges is helping to address the problem of bias in the courtroom.

“I think as the numbers change, we’re forced to change. As I’ve become more established in my career, I wonder if that bias I felt 10 years ago was because I was new. I feel much more confident now, so that really isn’t an issue anymore,” she says.

Angel Lopez, Multnomah County Circuit Court judge, is far removed from his early days as a public defender, but he vividly recalls how nervous he was about his first trial and the prejudice he might encounter in the courtroom. He quickly learned his fears were unfounded.

“I saw that the jurors don’t care about what race you are. They care about what you have to say about the issue and about the case,” Lopez says. “It was the first time I ever felt like an American because I felt equal to anybody involved in that trial.”

However, a trial in the Linn-Benton county area just over a decade ago introduced Lopez to the other end of the bias spectrum. Lopez was representing a Latino man charged with delivering drugs and had just picked the jury when the judge called him into his chambers during the lunch break.

“One of the jurors had made a derogatory remark about me and my client. The judge called the juror in, gave her an incredible dressing down and set her home packing,” Lopez says. “That came as a complete shock and surprise to me because I had never experienced anything like that before, at least not to my face. It just came out of the blue.”

Lopez says he believes the issue of bias in the courtroom has improved since the bar and the Oregon Supreme Court committed in 1974 to study racism and its impact on the state’s judicial system. Since then, the bar has implemented measures to address access to justice, affirmative action and other programs that foster diversity and inclusion within the system.

Still, many wonder if more needs to be done to address jury bias against attorneys and its potential impact on plaintiffs and defendants.

The Great Jury Debate
Jurors currently receive pretrial instructions that include the duty to consider a case neutrally and without bias. Some wonder if this is enough, given that many jurors may not even understand what bias is, let alone what their individual biases may be.

The Korematsu Center has studied the issue in depth and presents several sides of the debate, ranging from whether jurors should also be required to watch an instructional video about bias before being seated, if voir dire should be depended upon to weed out biased jurors, and whether video cameras should be installed to monitor jurors’ comments during deliberation.

Yet another potential option includes requiring jurors to take the IAT test for bias as part of the selection system. However, each option comes with plenty of potential to backfire. In the process of trying to prevent bias, there is the possibility that it may only encourage it. And, several of the options involve higher administrative costs that cash-strapped courts cannot afford to take on, the Korematsu Center found.

The regional debate is as robust as that taking place on the national level.

“I think the safeguards we have right now are about as good as we can have in the 21st century,” Lopez says. “I think there is room for growth and improvement, but I can’t see what that is right now.”

Lee, who has served on a couple of juries herself, says many jurors most likely even feel bias against their fellow jurors as they try to determine what kind of people they will be deciding the case with and make judgments about situations in which they have little experience.

One of Lee’s cases, for example, involved high school athletics. None of the jurors had ever played organized sports or had children or grandchildren who played sports in school. Yet some jurors had plenty of preconceived notions about the coach and the student athlete involved in the case.

Lee points out that the issue becomes increasingly complex when one considers the inherent conflict attorneys face in trying to seat unbiased jurors while also striving to retain jurors who are most likely to side with their client.

“It’s a case of blind justice versus convincing the jury to rule in your client’s favor,” she says. “Maybe this issue goes back to law school instruction on working with juries and even some hands-on practice on being a jury member, a rehearsal if you will, because most people have never been taught how to read people either.”

As the jury bias debate continues, additional issues under consideration include how to determine if jury bias directly impacts the verdict and whether opposing counsel has an obligation to report jury bias against their competitor, even if it means potentially jeopardizing the case against one’s own client.

ABOUT THE AUTHOR
Melody Finnemore is a Portland-area freelance writer and a frequent contributor to the Bulletin. For more information about the Implicit Association Test, please visit https://implicit.harvard.edu/implicit/demo/.