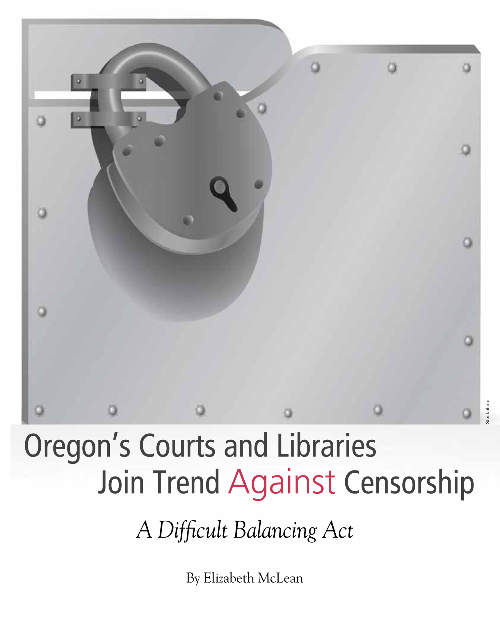 In 2011, public libraries across Oregon were pressured once again by patrons to censor or restrict certain books and movies. Gary Paulsen’s Harris and Me: A Summer Remembered is considered by most to be a humorous coming-of-age novel (a category fitting for all of Paulsen’s works), but was challenged on the basis that it “would encourage alcoholism, use of offensive language, and cruelty to animals.” Mom and the Polka-dot Boo-boo: A Gentle Story Explaining Breast Cancer to a Young Child was challenged due to nudity (a child’s drawing of a topless woman). The Tortoise and the Hare Race Again by Dan Bernstein & Andrew Glass was challenged because a patron was concerned that the negative language and humor were inappropriate for children1. Fortunately, all of these challenges were denied by their respective libraries, allowing adults and children alike to continue to access those constitutionally protected works.

Unfortunately, censorship attempts aren’t just coming from avid library-goers. They are coming in the form of statutes, drafted by state legislatures, including Oregon’s. Clearly, writers and artists need advocates to protect their right to create, and readers need advocates to protect their right to read certain material. Groups like the Media Coalition, the ACLU and the Comic Book Legal Defense Fund (CBLDF) have had their hands full in recent years as censorship attempts have grown in number and in effect. Fortunately, recent decisions indicate that state courts have joined this alliance, declaring unconstitutionally vague or overbroad many censorship statutes created by state legislatures. Oregon courts followed this trend last year in Powell’s Books, Inc. v. Kroger, 622 F.3d 1202, and this year, the United States Supreme Court set precedent in Entertainment Merchants Association v. Brown, 131 S. Ct. 2729, by protecting violent video games from California’s censorship attempt.

A Pattern of Censorship
In June, the United States Supreme Court struck an important blow against government censorship of art and expression when it declared unconstitutional a statute that would have criminalized the sale of violent video games to minors.

In Brown v. Entertainment Merchants Association, the Supreme Court ratified the status of violent speech as protected speech under the First Amendment. This is nothing new. Violence has been a source of entertainment and expression for eons. The Romans cheered for their gladiators, the Greeks for their Olympians, the medieval gentry for their knights. The Brothers Grimm achieved renown by binding it into page form, and the superheroes of today were born amid the BAMs CRACKs and KAPOWs of yesterday’s comic books.

Today, we flock to screens to watch bullets fly and to arenas to watch bodies fall like timber. We try to out-sleuth other viewers watching the same grisly murder mystery mini-series, and over 12 million of us, at some point, have wielded a weapon of choice in a World of Warcraft duel.2 Violent entertainment is as popular as ever, and in the case of Brown, the Supreme Court struck down California’s attempt to censor it.

At issue in Brown was a California law restricting the sale of violent video games to anyone under age 18, likening violence to obscenity. Justice Scalia, the opinion’s author, clarified that speech about violence is not a legal equivalent to obscenity. Scalia emphasized that the California statute was not the first to try to treat violence as obscenity, and the previous attempts to do so have failed to pass constitutional muster, citing both United States v. Stevens, 130 S.Ct. 1577 (2010) and Winters v. New York, 333 U. S. 507, 510 (1948).

The decisions cited by the majority in Brown span from 1915 to 2010, demonstrating an enduring tradition by states and localities to censor unpopular content in newly emerging media. As pointed out by the Comic Book Legal Defense Fund in its amicus brief, which was cited by Scalia in his opinion,

California’s bid to censor video games is the latest of a long history of moral panics that date back to the early nineteenth century. These recurring campaigns are typified by exaggerated claims of adverse effects of popular culture on youth based on pseudo-scientific assertions of harm that are little more than thinly-veiled moral or editorial preferences. Such censorship crusades have been mounted against dime novels, ragtime music, cinema, comic books, television, and now, video g ames. Brief of Amicus Curiae for Respondent at 3-4, Brown v. Entertainment Merchants Association, 131 S. Ct. 2729 (2011) (No. 08-1448).

Though the Supreme Court’s opinion in Brown is a victory for all First Amendment advocates, the case is merely one campaign in a war against censorship. In the past decade, private individuals, retailers and entertainment organizations have struggled to maintain their ability to own and disseminate certain content that some may consider objectionable.

In 2007, the Entertainment Software Association had to reach out to allies to combat the Minnesota Restricted Video Games Act, a statute mirroring that at issue in Brown. The act, which prohibited anyone under the age of 17 from purchasing or renting video games rated “M” (Mature) or “AO” (Adults Only), and imposed a $25 fine for violators, was eventually struck down as a violation of free speech.

Last year, the Alaska senate unanimously passed Bill 222, which criminalized the operation or management of websites or list serves that contain sexually related content deemed “harmful to minors,” even if the content is of the type adults have a First Amendment right to access. Operators found guilty of violating the law were required to register as sex offenders, serve jail time, and could possibly have lost their business. U.S. District Judge Ralph Beistlinehttp://mediacoalition.org/mediaimages/Alaska_Decision_6_30_2011.pdf">/a>recently declared the law unconstitutional June 30 in American Booksellers Foundation for Free Expression v. Burns, ruling that the law was not narrowly tailored and would have a chilling effect on constitutionally protected speech.

Also last year, after pleading guilty in United States v. Handley, a U.S. Navy veteran was sent to prison for owning comics. In his vast collection of manga comics was a minority of sexually explicit material, none of which depicted actual persons. Christopher Handley was sentenced to 6 months in jail and 5 years probation not for engaging in any actions that were a danger to members of his community, but because of his tastes in entertainment. The 40-year-old introvert had spent his time working as a computer programmer and caring for his ailing mother, whom he lived with. His social interaction came primarily from his online gaming and his Bible study. He posed no danger to his community, but was prosecuted for his enjoyment of illustrated cartoon entertainment.

And at the time of this writing, an American citizen is facing criminal charges in Canada after attempting to cross the border with manga comics stored in electronic form on his laptop. Because some of the characters depicted appeared young, this man was charged with possession and importation of child pornography. If convicted, he will serve a minimum one year jail sentence and must register as a sex offender — although he never possessed any actual child pornography.

Oregon’s Bid for Censorship
Oregon is no stranger to this pattern. In 2007, the Oregon legislature enacted two statutes (§ 167.054 and § 167.057) intended to criminalize the furnishing of hardcore pornography to minors. However innocent their goals may have been, the laws themselves provided a cautionary tale about the difficulties of crafting laws that limit speech and the risks of censorship. In its 2010 decision in Powell’s Books, Inc. v Kroger, the court ruled that the statutes’ language reached far beyond what could be constitutionally censored.

“The statutory text makes no mention of hardcore pornography, but rather refers to sexually explicit material and a visual representation or explicit verbal description or narrative account of sexual conduct,” wrote the court. Examples of literature that fell into this proscription but are, in fact, constitutionally protected include sexual education materials and novels for young adults. The children’s book Mommy Laid an Egg, or Where Do Babies Come From? by Babette Cole, depicts sexual intercourse; Kentaro Miura’s manga, Berserk contains cartoon depictions of sexual intercourse; and Margaret Atwood’s classic, The Handmaid’s Tale, contains verbal depictions of sexual conduct. The court noted that these clearly didn’t fall into the category of hardcore pornography and that criminalizing the distribution of these works trenched on the First Amendment rights of both minors and adults. The state cannot prevent adults from sharing material with minors that isn’t obscene, said the court, and because the text of the legislation swept up a significant number of benign materials in addition to hardcore pornography, both statutes were struck down.

It seems a difficult balancing act, protecting minors from offensive content while protecting the First Amendment rights of adults and artists. State legislatures have demonstrated in their attempts at accomplishing the former that narrowly tailored legislation can only be the progeny of careful drafting in the text of a statute and an awareness of accessibility rights of all groups. When censorships attempts are overbroad in effect, they create unintended victims who rarely are aware of the resources available to help them combat the effects of the legislation.

The Real Victims of Censorship
While the previous cases illustrate the myriad instances of injustice that accompany large-scale censorship, they also highlight the dangers of allowing the government to decide what constitutes art. A fundamental goal of the First Amendment is to prevent government from controlling what people can express and what expressions people can consume. See Ashcroft v. Free Speech Coalition, 535 U.S. 234, 253 (2002). But the history of censorship attempts suggests that moral panics will continue to drive unconstitutional legislation. It seems that no long-term lessons have been learned from the attempted regulation of dime novels, jazz music, cinema, cartoons, comic books and now, video games. Censorship targets materials that some people find objectionable — but the American public is as diverse in its objections as it is in everything else. It is not the role of the government to do the objecting.

In theory, censorship legislation targets societal evil, but in practice, it cuts against ordinary people: comic book retailers and collectors, video game players, music appreciators and adults who have a constitutional right to view adult material. What are these ordinary people to do when threatened with criminal charges and/or stigmatic labels just for buying the latest first-person-shooter game, or owning a comic book, or stocking adult-themed literature in a brick and mortar store?

ABOUT THE AUTHOR
Elizabeth McLean is a 2013 J.D. candidate at the University of North Carolina Chapel Hill School of Law. In the fall of 2011 she worked as a legal intern with the Comic Book Legal Defense Fund.