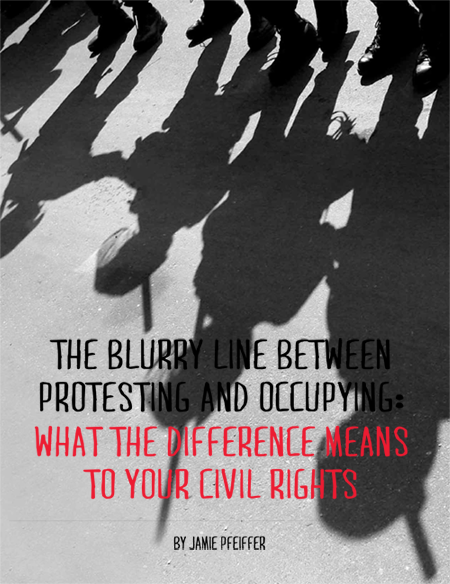 One of the distinguishing freedoms in our American society is that we are allowed to gather, in a group, for the purpose of peaceful protest against any perceived harm. But the recent “Occupy” protests have provoked some emotional debate from both sides — even when everyone was seeking to preserve (and perhaps enhance) the civil rights of the protesters and the community at large. Major questions involve the differences between lawful protest and civil disobedience, and how the Constitution’s protections differ for each, as well as the government’s right to restrict speech, conduct and assembly while preserving individuals’ First Amendment rights.

Protests Are Protected (But Some Restrictions Apply)
The First Amendment to the United States Constitution guarantees the right to assemble and engage in peaceful protest in what have become known as “traditional public forums,” such as streets, sidewalks and parks. The Supreme Court has upheld certain restrictions on the “time, place and manner” of the speech; the restrictions must be reasonable, not based on content and narrowly tailored to protect permissible public interests (such as safety). See Perry Education Ass’n v. Perry Local Educators’ Ass’n, 460 U.S. 37 (1983). By imposing acceptable restrictions, a city, county or municipality has the power to balance the civil rights of its general populace with the individual rights of the protesters.

For example, people conducting large, organized marches down city streets that will likely disrupt or stop traffic may be required to first obtain a permit, a restriction that has been upheld by courts as long as it is uniformly required of all large marches regardless of their purpose. In contrast, a small group that stays on public sidewalks and obeys all traffic signals is usually allowed to march without a permit, because such a group does not raise serious safety concerns or interfere with or threaten the general public’s right to use the roads.

Similarly, if a group intends to use public facilities or amplified sound, courts will likely uphold a permit requirement, but protesters may use the “call and repeat” method to vocally protest without a permit. Protestors generally have the right to distribute literature, hold signs, drum, dance, sing, chant and collect petition signatures and donations while on sidewalks or in front of government buildings as long as they are not disrupting traffic, harassing or forcing passersby to accept leaflets or otherwise blocking public thoroughfares.

Furthermore, an individual generally does not enjoy greater protection to engage in free speech activity than a private property owner is protected in exercising his or her property rights. Protestors do not have the right to protest on private property without the consent of the property owner, because constitutional protections apply only to situations involving “state action.” Hudgens v. NLRB, 424 U.S. 507 (1976).

Basically, the civil rights of protestors must be balanced against the rights of other community members and the welfare of the community at large. Thus, protest activities that endanger others or infringe on private rights or overly interfere with other public rights (including blocking traffic, interfering with businesses, harassing or intimidating others and creating a dangerous environment) can be legally curtailed.

But They’re Not Protesting! They’re “Occupying”!
Countries around the world with freedom of speech and assembly provisions, including the United States and Canada, are struggling with the distinction between “protesting” and “occupying,” and whether the protections granted to traditional protesting extend to an indefinite “occupation” of public land and resources in support of a broader “protest” (protected) movement.

Is encampment a form of symbolic speech that should enjoy protection? See Tinker v. Des Moines Independent Community School District, 393 U.S. 503 (1969) (right to wear armbands in school protesting war); United States v. O’Brien, 391 U.S. 367 (1968) (right to burn draft cards as form of symbolic speech). Or is it a form of civil disobedience — a peaceful but unlawful activity that is used as a form of protest but is not protected under the First Amendment?

The law has historically made a distinction between lawful, nonviolent, constitutionally protected protest and civil disobedience. Civil disobedience has been defined as one’s “deliberate refus[al] to comply with laws he or his group considers to be unjust,” and is separate and distinct from a lawful protest demonstration. See J. L. LeGrande (Sep., 1967), “Nonviolent Civil Disobedience and Police Enforcement Policy,” The Journal of Criminal Law, Criminology, and Police Science. The Ninth Circuit notes that “‘civil disobedience’ is the willful violation of a law, undertaken for the purpose of social or political protest. Cf. Webster’s Third New International Dictionary413 (unabridged, 1976) (“refusal to obey the demands or commands of the government” to force government concessions).” U.S. v. Schoon, 971 F.2d 193, 195-196 (9th Cir. 1991). This is, obviously, almost a phantom distinction, given that the “symbolic speech” protected by many of the landmark Supreme Court cases upholding expressive conduct as First Amendment-protected speech (including Tinker, supra) involve conduct that does violate the law but the Court has determined to be protected nonetheless.

In many past protests/demonstrations of civil disobedience that made statements about the oppressive unfairness of the laws and the government itself, protesters who broke the law — such as Rosa Parks — were arrested. In fact, the arrests of the participants drew attention to the laws that were unjust and energized people to overturn them. Thus direct civil disobedience resulted in changes to the very laws being broken. Conversely, indirect civil disobedience involves conduct that violates a law (e.g., trespassing on land privately owned by a shop) in order to protest something not directly related to the actual violation itself (e.g., the business owner’s unfair hiring practices).

One stated reason for using indirect civil disobedience against a government entity to protest conduct by a private organization is that it defies the authority of a system that continues to allow the unjust private activity to occur. See Kimberley Brownlee, “The Communicative Aspects of Civil Disobedience and Lawful Punishment,” Criminal Law and Philosophy (9 Nov. 2006). Thus the violations by the Occupy movement of local government authority can be viewed as a protest against the government’s support for or failure to remedy the current social and economic conditions.

The Occupy movement seeks to combine lawful, First Amendment-protected political speech with indirect civil disobedience, disregarding laws for the purpose of social and political protest. Thus, the question becomes: does arresting the Occupiers (or threatening arrest if they do not leave public lands protected by anticamping ordinances) violate their constitutional rights to free speech and protest? That is, does the conduct of “occupying” — establishing semipermanent residences in public spaces — constitute protected free speech?

The Supreme Court has previously said no. In Clark v. Community for Creative Non-Violence, 468 U.S. 288 (1984), the Supreme Court considered whether application of the regulations against camping in a national park so as to prevent sleeping in tents infringed demonstrators’ First Amendment right of free expression during an “occupy”-like protest designed to call awareness to the plight of the homeless. The Court found that “sleeping in connection with the demonstration is expressive conduct protected to some extent by the First Amendment.” It emphasized, however, that “[e]xpression, whether oral or written or symbolized by conduct, is subject to reasonable time, place or manner restrictions.” The court explained:

We have often noted that restrictions of this kind are valid, provided that they are justified without reference to the content of the regulated speech, that they are narrowly tailored to serve a significant governmental interest, and that they leave open ample alternative channels for communication of the information.… Symbolic expression of this kind may be forbidden or regulated if the conduct itself may constitutionally be regulated, if the regulation is narrowly drawn to further a substantial governmental interest, and if the interest is unrelated to the suppression of free speech.… That sleeping, like the symbolic tents themselves, may be expressive and part of the message delivered by the demonstration does not make the ban any less a limitation on the manner of demonstrating, for reasonable time, place, or manner regulations normally have the purpose and direct effect of limiting expression but are nevertheless valid. Id. at 293-294.

Balancing the Needs of the Many with the Rights of the Relatively Few
Starting in early November, city governments began dispersing the Occupiers from public spaces based on the fact that neutral, pre-existing laws that constituted allowable “time, place and manner restrictions” were being violated.

On Sunday, Nov. 13, police in Portland resumed enforcing the pre-existing municipal laws against being in a park after midnight (Portland City Code § 20.12.210) and erecting structures in a park (Portland City Code § 20.12.080). By further authority of the Portland City Code, the city closed Lownsdale and Chapman Squares “for repair and to remediate any remaining safety, health and crime problems.” Statement from Portland Mayor, Sam Adams, on Nov. 10, 2011, available at www.portlandonline.com/mayor/index.cfm?c=52750&a=373519(accessed Dec. 6, 2011).

On November 16, New York State Supreme Court Justice Michael Stallman upheld the eviction of protesters from Zuccotti Park in Lower Manhattan, New York City, ruling that the protestors did not have a First Amendment right to remain in the park along with their tents, structures, generators and other installations. The judge ruled that the owner of the park (a privately owned space designated as “public land” under New York zoning regulations) has the “right to adopt reasonable rules that permit it to maintain a clean, safe, publicly accessible space,” and noted that “even protected speech isn’t equally permissible in all places and at all times.” In the Matter of the Application of Jennifer Waller v. City of New York, 11112957, New York State Supreme Court, New York County (Manhattan).

[T]he City had two principal goals: guaranteeing public health and safety, and guaranteeing the protestors’ First Amendment rights. But when those two goals clash, the health and safety of the public and our first responders must be the priority…. No right is absolute and with every right comes responsibilities. The First Amendment gives every New Yorker the right to speak out — but it does not give anyone the right to sleep in a park or otherwise take it over to the exclusion of others — nor does it permit anyone in our society to live outside the law. There is no ambiguity in the law here — the First Amendment protects speech – it does not protect the use of tents and sleeping bags to take over a public space. http://blogs.wsj.com/metropolis/2011/11/15/ statement-from-mayor-bloomberg-on-clearing-zuccotti-park/(accessed Dec. 6, 2011).

It should also be noted that thus far the governments dealing with the Occupiers have at least ostensibly tried to grant consideration to the movement’s message, allowing them to stay in some parks for months. Additionally, unlike some of the violent skirmishes at civil rights protests in past years, with only a few exceptions the conduct of both the active protests and the evictions have been relatively harmless on both sides, although reports of excessive force have been made and violence has occurred.

A challenge for the Occupy movement going forward will be to determine whether its message can be effectively communicated through lawful, protected protest (complying with time, place and manner restrictions, e.g., conducting protests during open park hours or relocating to private lands and complying with permit requirements) or whether it will need to embrace unlawful civil disobedience as a catalyst for change.

Perhaps most notable, however, is that at this moment we are contemplating our freedoms and rights as citizens of a country that allows dissent and open protest of regimes, governments and ideologies. Let’s appreciate those freedoms, whatever our individual position is on the Occupy movement.

ABOUT THE AUTHOR
Jamie Pfeiffer is an associate in the Portland office of Bullivant Houser Bailey, where she focuses on employment law and general commercial litigation. Her article originally appeared in the December 2011 edition of the Oregon Civil Rights Newsletter, published by the OSB Civil Rights Section and is reprinted here with permission.