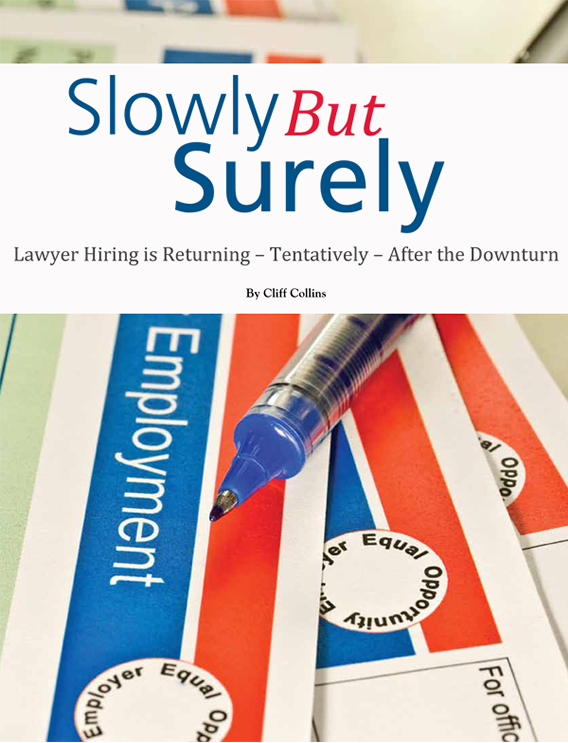 Three years after some Oregon law firms had to reduce personnel in the wake of an ugly recession, firms now are seeing signs of gradual improvement for their hiring picture.

No one is doing cartwheels yet, however. The prospects for new or inexperienced attorneys landing jobs are tough, firm hiring managers say. Conversely, lawyers who have a few years of work under their belts, especially if they can bring either specific expertise or a portfolio of clients — or both — are gaining employment, and are even in strong demand in some quarters.

But a change has occurred since the recession: Firms slashed hiring of first-year associates during the down times, and many firms have since realized that they could function with fewer first-years.

“From a business model, it has worked,” says Jill L. King, director of attorney recruiting and development for Schwabe, Williamson & Wyatt. “Firms figured out a way to do more with less, including their talent. I do think we’ve figured out ways to do things and achieve the same results. Those classes of first-year associates have shrunk dramatically. Gone are the days of hiring 12 to 15 every fall.”

The age-old principle of leverage, a high ratio of associates to partners, is steadily dying out...It is being replaced by a “New Leverage” based, not only on (fewer) associates, but also on other forms of leverage — temporary or contract lawyers, paralegals, process management specialists and by the outsourcing of functions such as legal research, e-discovery and document management. This trend is not restricted to law firms. Many corporate legal departments, faced with senior management directives to reduce costs, are doing the same.

Another effect of the recession is that firms say they cannot find enough first-year candidates with what hiring managers call “real-world experience.” Lawyer recruiters sometimes refer to this phenomenon as “K-through-JDs”; that is, students who went straight through school and law school without holding any type of job, such as working in a firm, court chamber or nonprofit or corporate setting to gain skills and make contacts, or even working in nonlegal jobs such as sales or teaching.

The reason was largely a result of the dearth of entry-level jobs of any type, a condition that propelled many students to seek additional levels of training such as a master’s degree in business administration.

But many law firms view this trend as a drawback, believing that candidates who have more life experience are more mature and bring broader skills than those who have been only students. Firms find that there are so many candidates available who were top students, they can pick and choose more than ever, and if a candidate commands real-world experience along with good academic credentials and performance, that candidate is favored by hiring managers.

Rebekah Hanley, assistant dean at the Center for Career Planning and Professional Development at the University of Oregon School of Law, thinks that law students who are in their first or second year of law school will fare better than the more unfortunate recent classes.

“I’m optimistic, and I really do see interest and enthusiasm about our 1Ls and 2Ls,” she says. “3Ls have a harder time. There are fewer opportunities for full-time, long-term employment than part-time, short-term.” The downturn in the economy often meant that 3Ls could not get placed anywhere to work during the school year or in summer clerkships, so they were not able to gain experience, she says.

“We have seen a flurry of activity: a lot of job postings, a lot of interviews and offers, but they’re more concentrated on 1L and 2L classes,” Hanley says. “In the fall, things starting changing. The law firms in Portland used to have summer programs that now are half the size of what they used to be. Smaller firms went from a couple (of students) to none; now they’re at a couple again.” Most summer programs are smaller in size than in past years, but the firms are hiring again, just not as many graduates, she says.

As reported by the Hildebrandt Institute, law firms and corporate legal departments are placing a premium on candidates with key skills and relevant experience to fill gaps in expertise and make immediate contributions. According to the Robert Half Legal Hiring Index, for the first quarter of this year firms have been cautious about hiring, but “optimistic enough” to add personnel in key positions, both lawyers and support staff. And although the survey canvassed relatively small firms and corporations, approximately one-third of the lawyers interviewed planned to add legal staff, while only 4 percent expected to reduce personnel.

As one indicator of recent activity specifically in Oregon, the February-March edition of the Oregon State Bar Bulletin ran almost four times the normal number of announcements for new hires and promotions, says editor Paul Nickell.

The Portland market follows that pattern, according to King. She says Schwabe is still hiring first-years, but is hiring more lateral associates and partners.

“The pendulum has swung more toward laterals,” says King. “I definitely think things are improving, and we are doing more hiring now than in the last three years.” Last year the firm’s hiring of laterals was on par with pre-recession 2007.

Schwabe’s summer class will increase this year, too, to nine summer associates, compared with only two last year, five in 2010, and eight in 2009. Previous to that, classes numbered from 12 to 15.

“We want people with real-world experience. They come in with more maturity (and understanding of) how to be professional,” says King. “We’re still hiring first-year associates,” but there “seem to be fewer and fewer” with practical experience. This means firms can be, and are, highly selective, hiring only students who were first or near the top in their class.

Hildebrandt notes that “part of the challenge for new law school graduates is the question of value. While partners and midlevel associates can capitalize on their years of practice experience, most new lawyers will require an investment on the firm’s part in order to realize their value. And the looming threat of another global financial crisis makes that investment a risk. For the time being, firms are hedging their bets.”

Even though attorney hiring has been down over what it was several years ago, “We have not stopped hiring,” emphasizes Michelle Baird-Johnson, director of recruiting and professional development for Miller Nash. “It’s slow, but definitely moving in the right direction.”

Last year, the firm hired six new attorneys: three entry-level associates, two lateral associates and one partner. Miller Nash will hire seven entry-levels this year, and up to three laterals. “We are trying to grow our Seattle office and build its business practice. We also will be hiring summer clerks. We expect to hire five clerks.”

Entry-level hiring dipped for a couple of years, she says. “Summer 2010 was a very small class ... but now we’re back to what we were two to three years ago.” She adds that lateral hiring hasn’t changed much: It still is geared to specific needs. During the recession, the need dropped for mergers and acquisitions, real estate and land use. Up were areas such as litigation and bankruptcy.

“Our lateral hire last year was a business lawyer, but he brought clients with him,” Baird-Johnson says.

Miller Nash also has offices in Bend and Prineville. “I have hired for the Bend office before, but not lately,” she says. “The last time was 2009. Our Bend office is busy with the attorneys we do have. It’s a difficult market right now in central Oregon.”

“I think we’re all in a wait-and-see mode,” says Whittall, who is responsible for recruiting for the entire firm, which has 11 offices in seven states. “There is a lot of movement on the partner level.” Seasoned lawyers who can bring a book of business have been picked up in multiple markets since 2010, she says.

This trend is due to what she calls “merger-mania: more consolidation, more firms looking to expand through lateral partner acquisition.” This type of hiring exceeds that in 2007, “but it’s all very strategic hires.” Stoel Rives specializes in the areas of environmental law and technology and is looking to expand its presence in California and Seattle. “We will know a lot more about our hiring after the first quarter.”

She says part of her hesitation in making predictions for this year is that Oregon is “not gaining a lot more jobs,” and there are still hundreds of people each year coming out of law schools, but “so many graduates without jobs. There are too many law graduates for the amount of jobs that are available. That is a bad fact.”

Since 2008, summer associate classes have gotten much smaller, Whittall says. The many new graduates who expect to land a corporate law job are going to have to “rethink” how they approach the job market, and will need to look to work in government, corporate or nonprofit jobs, “to get experience where they can.”

It’s a national trend: There are fewer opportunities for entry-levels, she adds. “But the great thing about Portland is that it has the highest number of nonprofits in this market than anywhere else.”

According to the Robert Half Legal survey, corporate legal departments continue to expand their in-house capabilities in order to reduce their spending on outside counsel. But again, the experienced attorneys are at an advantage: “Lawyers well-versed in all aspects of corporate law are sought for general counsel and assistant counsel positions,” the report states.

Veteran Portland attorney recruiter Linda Green Pierce, president of Northwest Legal Search Inc., says her corporate clients are seeking and receiving budget approvals to hire lawyers for their legal groups. “They are seeing lots of candidates before pulling the trigger, and doing a lot more referencing and testing, but there is lawyer hiring going on,” she says.

“My law firms are beginning to feel that the economy is getting better, at least from the standpoint that they are getting more work. Hiring remains very precise and slow-going on decisions,” but some hiring is taking place, she says.

“I feel much more optimistic starting this year than I did at the beginning of 2011.”