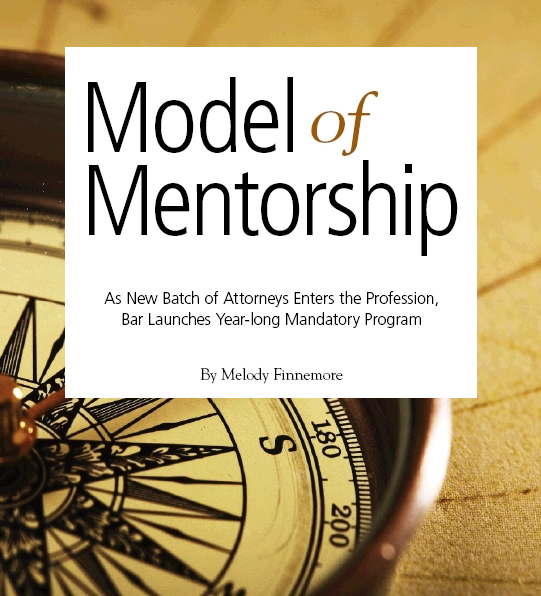 As a young lawyer admitted to the Oregon State Bar in September 2008, Shenoa Payne encountered plenty of perplexities about the profession. She was a plaintiffs’ attorney but had yet to do a pleading, deal with opposing counsel and figure out the various rules of court. In addition, Payne had never billed before and suddenly found she was living in 60-minute increments.

“There’s a lot that law school doesn’t teach you about being a lawyer,” says Payne, an associate at Portland’s Haglund, Kelley, Horngren, Jones & Wilder. “Your initial exposure to these things feels overwhelming when you first start to practice. There also are a lot of unspoken rules in practice that aren’t written down anywhere, so to have someone to explain those unspoken rules is a huge help when you first start your practice.”

In Payne’s case, that someone was Judge Darleen Ortega with the Oregon Court of Appeals. As Payne’s mentor during her last year of law school, Ortega counseled her on how to find a job and helped her network within the legal community. Now that Payne is practicing, Ortega provides advice on professional quandaries ranging from how to address certain issues with a supervisor to balancing personal time with long work hours.

“She is basically someone I can talk to without fear of some sort of consequence. And if she doesn’t have the answer, she’s really great about pointing me to somebody who might have the answer,” Payne says.

“I have learned from that experience how much the mentoring relationship is a two-way relationship. The law students I mentor have really taught me a lot and have helped me to grow as a person,” she says.

“Mentoring is not just about the mentor imparting wisdom or handing down knowledge because mentors are equally impacted by the relationships as well,” Payne adds. “If they are open to it, mentors can learn just as much from the relationship as the new lawyer or law student.”

As the Oregon State Bar launches its New Lawyer Mentoring Program (NLMP) for incoming members, its goal is to provide personalized guidance for new members as they establish their practice. The mandatory, year-long program also seeks to promote professionalism, civility and collegiality.

Development of the NLMP began with the recognition that opportunities for mentorship may no longer arise as naturally as in years past. The recession and corresponding lack of jobs have forced many new lawyers to establish solo practices. In addition, the state bar’s growth means it can be more challenging to introduce new attorneys to the legal community and guide them through the transition to law practice.

Paul De Muniz, chief justice of the Oregon Supreme Court, says he got involved in developing the mentorship program because he believes Oregon has a unique legal culture and he hopes to preserve that. As he searched for models for Oregon’s program, he talked with chief justices in other states about what worked and what did not.

While Oregon’s program is loosely modeled after similar programs in Georgia and Utah, this state’s program is unique because it emphasizes a flexible approach in which mentors and new lawyers take the core curriculum and shape it to best meet the needs of the new lawyer.

“This is uniquely an Oregon program because it is geared toward the idea of professionalism,” De Muniz says. “As lawyers, in the truest sense of what we do, our job is to resolve conflict, not create it.”

When he heard that a formal mentorship program was in the works, Steve Johansen’s interest was piqued and he wanted to get involved. A member of the Oregon Bench and Bar Commission on Professionalism, Johansen served on the task force that crafted the program. In addition, the Lewis & Clark College law professor chaired the task force’s curriculum subcommittee.

Though he is on sabbatical this semester, Johansen talked about the mentorship requirement last fall with several first-year law students as well as some recent graduates.

“So far the response I’ve gotten, and that other people have gotten, has been overwhelmingly positive. Students, as they are transitioning into practice, realize there is a lot you can’t learn in law school,” he says. “It’s been a great project to work on and I’m really excited to see how it plays out. I think it’s a significant step forward for the bar.”

Ashlee Sorber, general counsel for American Pacific International Capital in Portland, began practicing in 2003 and says she supports the mentorship requirement. She hopes other new lawyers will have access to the same knowledge and advice she received from her mentors, both formal and informal.

“One of the strongest ways that mentors help new lawyers is by guiding them through tricky areas of the law that new lawyers haven’t yet been exposed to,” she says, noting a couple examples of practical applications include case evaluation and managing difficult clients.

The NLMP was developed over the course of about 18 months. Steve Piucci, Portland attorney and OSB president, says he takes pride in the bar’s ability to initiate the program so expeditiously. He also is encouraged by the response the bar received in its recruitment of mentors for the first group of young lawyers to participate in the program.

“The response was very promising, and many have replied that they will benefit as much as the young attorneys,” Piucci says.

Experienced attorneys such as Ruth Pekelder, a shareholder with Portland’s Gevurtz, Menashe, Larson & Howe, have long been quick to volunteer as mentors because the memories of life as a new lawyer remain fresh.

“I remember how frightening it was to be a new lawyer, and I hope I can do something to give a young lawyer confidence, assurance and a direction,” Pekelder says.

While she didn’t participate in a formal mentorship program, Pekelder learned from others on the job as a Multnomah County deputy district attorney and, later, in private practice. Some of these informal mentors were attorneys she worked with and some were on the other side. In fact, she recently spoke with a lawyer who was opposing counsel in one of her first civil cases 22 years ago.

“I was an utter disaster, and I commented to this attorney that I have never forgotten his kindness, his professionalism, and how he exemplified gracious treatment of an inexperienced attorney,” Pekelder says. “I will be forever grateful to him, and I have tried to demonstrate that same level of respect when I have worked against a new attorney. It means the world to be taken seriously when one feels so unworthy.”

Legal assistants and other support staff also have been an invaluable source of professional training, particularly when it comes to how to treat clients, navigate office maelstroms, draft and file pleadings, communicate effectively and market one’s services.

“Nonlawyer mentors, in and out of the office, are primary. Remember to show your appreciation, and not just on ‘Legal Assistant Appreciation Day,’ ” Pekelder advises.

As a mentor herself, she has found over the years that each young lawyer seeks something different from the relationship. Some want an experienced attorney who can answer substantive questions of law, ethics or procedure. Others want to hash through the best way to deal with a difficult client, adversary attorney or boss.

“I see my role as being a teacher, a guidance counselor, a therapist and a coordinator,” Pekelder says. And, if a new lawyer needs something she can’t provide, she feels it’s her job to find someone who can step in and give it.

“I hope to bring something to the relationship by sharing my own mistakes and struggles, but I also think that one of the characteristics of experience (and age) is creativity. I hope my perspective and insights can be of some benefit,” she says.

“Although it is not something I deliberately set out to do, one of the natural consequences of mentoring is to instill values of respect, honesty, and most importantly, the joy of practicing law,” Pekelder adds. “That’s what I hope to bring to the table, and that is what I love about being a mentor.”

Matt Levin, a shareholder at Portland’s Markowitz, Herbold, Glade & Mehlhaf, has for many years volunteered his time, energy and expertise to help guide new attorneys. He views serving as a mentor not only as a professional responsibility, but as an ongoing commitment he enjoys on a personal level as well.

“I like meeting new people, I enjoy my job and I know that being a young associate or young lawyer can be very, very stressful. I like to tell people there is a light at the end of the tunnel and it’s not an oncoming train,” Levin says.

Levin, whose mentorship takes place both at work and while teaching at Lewis & Clark’s law school, says his advice often includes small, practical tips because the little things many times are the most intimidating. These can range from how to address opposing counsel to where a new lawyer should stand while arguing his or her first motion.

While he mastered the basics long ago, Levin still continues to learn from mentors such as his partner, David Markowitz, also a strong proponent of mentorship. Levin notes that attorneys of all ages benefit by seeking advice from people they admire, and says he is encouraged that young attorneys will have such opportunities through the bar’s New Lawyer Mentoring Program.

“I think it benefits a mentor and the person being mentored to be part of that relationship, and if this requirement ensures that it happens more often, I think it’s a good thing,” Levin says.

Payne, now in her third year of practice, agrees that young attorneys like herself stand to gain much from the program.

“This apprentice-type relationship will be a great resource for new lawyers because more experienced lawyers will guide them in their first year of practice and they will learn more practical skills from their mentor,” she says. “It’s a great idea and it will be interesting to see how it plays out.”