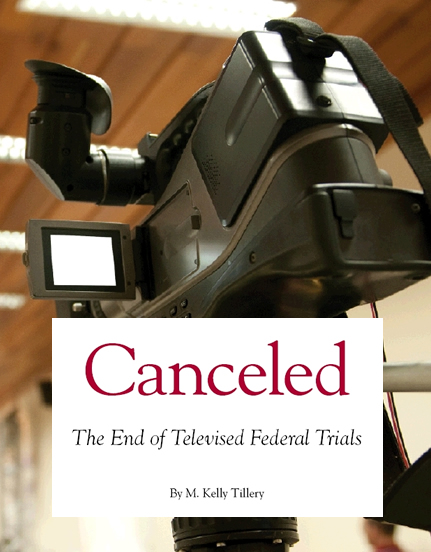 Five justices overruled District Court Chief Judge Vaughn Walker (and 9th Circuit Chief Judge Alex Kozinski), effecting a blackout based on a procedural ruling that a statute was likely violated when a local rule was revised. Although the Court twice cautioned that it would not express “any view on whether such trials should be broadcast,” it did precisely that and made its position clear — federal trials should not be televised. While acknowledging that the issues being tried in this “high-profile trial” were “the subject of public debate throughout the state, and indeed, nationwide,” it concluded, “This case is therefore not a good one for a pilot program,” implying, strangely, that only cases in which there is little public interest would be appropriate for televising. The last time the court stopped anything like this was the re-counting of Florida votes in Bush v. Gore. Ironically, Olson was counsel for Bush and Boies for Gore.

The Prop. 8 supporters claimed broadcasting might cause “harassment, economic reprisal, threat and even physical violence” to their witnesses. A close examination of those claims revealed that they were, as Olson observed, “utterly unsubstantiated and groundless speculation” based solely on claims of paid expert witnesses whose identities and views were already widely publicized.

Not only is this the first time the Supreme Court ever literally “pulled the plug” on televising a trial, but it was also done in a case which was the “poster child” for televising trials. The only issue at hand was simply live streaming to courtrooms in five other cities. The case was a civil, nonjury dispute involving only already prominent, adult litigants. It was and is history in the making, involving social and constitutional issues affecting millions and certain to land on the Supreme Court’s docket. And, it was probably the civil trial attracting more interest than any other in years.

The court’s micromanagement, however, included a provision that exposes the flawed reasoning behind the prohibition. While blindly accepting the baseless protestations of danger, it did not completely prohibit electronic “courtroom expansion,” which may be the intellectual seed of the eventual reversal of the ban. Although it prohibited live streaming to courtrooms in other courthouses around the country, it permitted same to other rooms within the same courthouse. Not even a “Philadelphia lawyer” could explain a principled distinction between what was prohibited and what was permitted.

Neely v. Club Med: Lessons From the Past
This order brought to mind a simpler time, long ago, when a small window of judicial transparency opened, when a few federal civil trials were actually televised. And, I tried one of them.

I have long confined my practice to intellectual property law but early in my career handled maritime cases and became a proctor in admiralty. While that combination of legal specialties is admittedly unusual, the last maritime case I tried, Neely v. Club Med, was even more so, in several ways, not the least of which was being nationally televised under a federal pilot program. In 1993, Court TV, Steven Brill’s then only 2-year-old cable channel, televised this nine-day jury trial, complete with color commentary and analysis by Doug Llewelyn (originally of “The People’s Court”) and Jay Monahan (1956-1998), a New York trial lawyer and husband of (then) NBC’s Katie Couric.

My client, Eileen Neely, a scuba diving instructor, had been seriously injured in a diving accident on a Club Med expedition in St. Lucia. Court TV believed the case would be of interest to its viewers and neither Neely nor I had objection. Club Med, however, strenuously objected, and particularly so to a Court TV news release calling it “a fascinating personal injury case” and “a real tale of horrors.”

“Hamster of the Day”

That is what happens in a free society.… This is a civil case, not a criminal case, but not a civil case involving the tender psyche of a young child …

… people have a right to know what is happening in a public forum, which is a United States District Court …

… other judges on this court who have heard trials, apparently things have gone along smoothly. I am supposed to give it a trial run, do the experiment.

You happen to be the hamster of the day.

After hearing 24 witnesses, the jury returned a verdict for plaintiff of $556,700.

Despite Club Med’s initial concerns, there was no evidence that the filming and broadcast had any effect whatsoever on the judge, any witness, counsel, juror or the outcome. Even Club Med’s trial counsel now concurs.

One concern is that participants might “perform.” That was not our experience. Judge Gawthrop was well known for his performances off the bench, particularly his magnificent baritone voice in Gilbert and Sullivan works, but his “15 minutes of fame” on national camera did not alter his always professional behavior on the bench. While he did pepper the record with bon mots and witticisms, such as, “maritime law is difficult to fathom,” that was standard fare for this unique jurist, not at all due to the presence of cameras.

Pilot Project
In 1994, the Federal Judicial Conference rejected the recommendation of its own committee to authorize recording and broadcasting of civil proceedings. Based upon a three-year pilot project, the committee concluded that “[m]ost jurors and witnesses believe electronic media presence has no or minimal detrimental effects on witnesses and jurors,” and “[j]udges and attorneys… reported observing little or no effect of camera presence on participants in the proceedings, courtroom decorum, on the administration of justice.”

Despite the paucity of problems, the conference somehow “concluded” that “the intimidating effect of cameras on some witnesses and jurors was cause for concern.” Oddly, the 28 conference judges who regularly make decisions based only upon evidence, not only ignored the compelling evidence supporting their committee’s recommendation, but also failed to explain upon what evidence — if any — they based their contrary “conclusions.”

While anecdotal, the real “evidence” from Neely is clear – not one witness or juror was intimidated. The jurors were never filmed. The two stationary cameras were unobtrusive.

In 221 years, Neely was one of only 35 complete federal civil trials broadcast. In not one of those cases was the filming or broadcast made an issue on appeal. That fact alone is more telling than any fears, concerns or beliefs.

Right to Attend
The Supreme Court has said that “A trial is a public event,” Craig v. Harney, 331 U.S. 367 (1947) and held that the right to attend a criminal trial is “implicit in the guarantees of the First Amendment” Richmond Newspapers, Inc. v. Virginia, 448 US 555, 580 (1980), while implying that the same holds true for civil trials. Four circuit courts have actually held that it does.

Thus, every citizen has a constitutional “right to attend” every federal trial. Obviously, it is physically impossible for more than a few hundred to attend any trial. And, truth be told, present courtroom capacity is more than adequate to meet current demand. On occasion, however, there is intense and widespread interest in trials occurring far from many who are interested. Perry was such a case.

Transparency — Virtual Access
Since 1979 for the House and 1986 for the Senate, gavel-to-gavel television coverage has brought the legislative branch into our living rooms. The judicial branch, however, remains accessible only by rationing, governed by timing and courtroom location and capacity.

In a world where we can watch live video of a news anchor’s colonoscopy or an environmental disaster a mile below the ocean surface, surely we ought to be able to view a few interesting federal civil trials in the same manner. Without electronic “courtroom expansion,” this “right of access” will be a reality only for the rich and the retired. Although the Founders might not have anticipated this dilemma, or at least its electronic solution, surely they did not intend that result.

Lost to History
The technology to televise trials has existed for almost 70 years, and the ability to record audio and video has existed for 115 years. In that time, only a handful of the hundreds of significant and/or interesting federal civil trials have been recorded and/or broadcast to wider-than-courtroom audiences. How much history have we lost? The few recordings of famous trials that exist are riveting, and the few of the not-so-famous are useful teaching tools.

A Room Too Small
In 1994, cameras were large, the Internet was in its infancy and YouTube was science fiction. As Guttenberg’s Mazarin Bible changed the world in 1453, electronic media technology has revolutionized virtually everything, including access to our courts.

Even if there had been any significant evidence to support the conference’s ban in the past, there is none today. Almost every state court system permits cameras in civil courtrooms, and many have done so for years. There is no chaos in our state courts, at least none attributable to cameras.

In our democracy, the knowledgeable tend to be more robustly engaged in public issues. Information received by direct observation is often more useful than that strained through the media. Actually seeing and hearing court proceedings, combined with commentary of informed members of the press and academia, provides a powerful device for monitoring the courts.

“Back to the Future”
Although at the time of this writing there is no bill pending in Congress on this issue, such bills have been introduced every year since 1997. While the Obama administration has not yet formally spoken, considering its stated reverence for “transparency,” it might be expected to favor cameras. The Bush administration, not surprisingly, consistently opposed any electronic media coverage of any court proceeding. Judge Kozinski, also a member of the Judicial Conference, recently spoke in favor, arguing that 47 states permit it and the federal courts must reconsider “in light of current technology.” The Supreme Court itself has said that “the time may come” when technology and experience establish that concerns about television coverage are no hazard to a fair trial.

The entire citizenry is entitled to see its judiciary functions. A well-informed public that shares and preserves its record of justice will be a better public. The present archaic ban, based on little evidence and unfounded fears, will fall. It is just a matter of time. And when it does, even those who so fervently opposed cameras in the courtroom, will see, as we did so long ago in Neely, that they do no harm and bring great benefit.