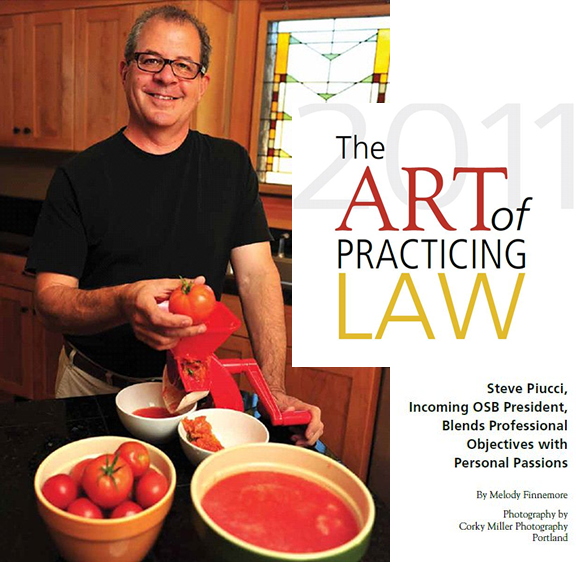 Steve Piucci’s office, located in the old Photo Art building on Southwest 13th Avenue and Taylor Street in downtown Portland, reflects the attorney’s appreciation for a broad array of artistic styles and mediums. Colorful oils painted by Piucci’s son, Joe, and his twin brother, Mark, are among the eclectic collection of contemporary pieces on display throughout the office.

For Piucci, the Oregon State Bar’s incoming president, it’s essential that his work space not only reflects his love of art but, in a larger sense, sets the tone of his life philosophy.

“I appreciate the life I have and I enjoy people,” he says. “I strongly believe that we all need to figure out how to wake up happy. Living in this beautiful state is conducive to being a productive person. When I am at work I’m having fun and in the best frame of mind to help my clients.”

When he’s not in the office, Piucci most enjoys family, friends, music, gardening, cooking and anything that gets him outdoors and around the state, especially the Oregon coast.

Community Activism Drives Career Choice
Piucci knew he wanted to be an attorney when he was 12 years old. He jokes that he made the choice because he was greatly impressed by a lawyer friend of his father’s who had box seats to Boston Red Sox games. In truth, the turbulence of the 1960s had a bigger impact on the adolescent Piucci.

“I was already interested in politics, but you throw in the Vietnam War and the civil rights movement and that just really grabbed me,” says Piucci, the oldest of five brothers, which includes two sets of twins.

His father, a university administrator, and his mother, a teacher, encouraged their sons to engage in lively family debates about politics and other civic issues during dinner. Piucci grew up primarily in Rhode Island and New York and, while the family lived in upstate New York, his father served as campaign chair during John F. Kennedy’s presidential bid and Bobby Kennedy’s run for the U.S. Senate.

Piucci pursued his legal career after earning a bachelor’s degree in political theory from the University of Illinois in 1976. He received his law degree from Gonzaga University in 1981.

That year, Piucci moved to Portland with his wife, Melissa Powers, a video producer. Piucci began his career as a general practitioner in 1982 and says he eventually chose plaintiff’s work because he likes the competition involved and feels that by representing people, he’s on the right side.

A solo practitioner, Piucci says he appreciates doing work that he loves, with an exceptional group of staff and colleagues that add to his enjoyment of coming to work each day.

Above it all, though, Piucci relishes the chance to help others, particularly those who have been injured. His clients and their families usually face extreme challenges, both physical and emotional. They also often are afraid of what the system has in store for them as they begin their legal journey.

“The greatest thing about what I do is being able to put a person on equal footing with a corporation. They have the same rights and they go into court on an even playing field,” he says. “I make two promises to my clients: I will only tell them the truth and I will work hard. We build from that and together we work on solving the client’s legal issues.”

Among his most memorable cases was his representation of Lt. Col. Bradley Robert, a member of the U.S. Air Force who was struck by a semi truck while helping at the scene of an accident in eastern Oregon. After both of his legs were run over by nine sets of tires, Robert, a decorated Gulf War hero, made a phenomenal recovery and the eventual settlement provided the Robert family with the funds they needed to heal and move on with their lives.

Piucci’s philosophy of participation in society and his profession is seen through his involvement in legislative, judicial and law policy issues throughout his career. His peers have honored him through his election as president of the Oregon Trial Lawyers Association (2000-2001), his acceptance into the American Board of Trial Advocates and his selection as one of Oregon’s top trial attorneys by Super Lawyers.

Piucci’s legal career has been dedicated to helping not just his clients, but also the legal profession itself. He has been active as a speaker and author, but his greatest achievements may be found in his efforts to help young lawyers. His participation in OTLA’s New Lawyer Academy and his mentorship of dozens of young lawyers sets the groundwork for his leadership in helping launch the new lawyer mentorship program taking effect in 2011 through the OSB.

Mentorship Among Top Objectives
As bar president, mentorship of young attorneys is a top priority for Piucci. He had many mentors as a young lawyer, and has remained friends with all of them over the last three decades. It is these types of longstanding relationships that he feels are essential for young lawyers to form as they transition into practicing lawyers.

“I’ve always felt that new lawyers need a lot of support and encouragement because, if they transition correctly, they can have a great life. That’s the hardest problem for most of them, and it’s worse now,” he says, referring to the staggering debt load and sobering job market many new attorneys face upon graduation from law school.

The new mentorship program, enacted by supreme court rule, will require new lawyers to complete a year-long program designed to promote professionalism, civility and collegiality. Piucci believes it will introduce new lawyers to the unique legal culture here in Oregon, where lawyers collaborate to maintain what is seen around the country as one of the best places in which to practice law.

Along with ushering in the mentorship program, Piucci’s goals as bar president include helping to implement the iCivics program in Oregon schools. Established by U.S. Supreme Court Justice Sandra Day O’Connor, the free, interactive, online curriculum is designed to teach students about civics and inspire them to participate in democracy. The bar has partnered with the Classroom Law Project and Oregon Supreme Court Chief Justice Paul De Muniz to promote it to Oregon school districts.

“There is a vast need to get civics education back in the classroom. I think a lot of the discontent in society about government is because people don’t understand its purpose,” he says. “We see this in elections and with juries — there’s a disconnect that needs to be fixed.”

Piucci’s objectives also include building on successful programs already implemented by the bar, such as its sustainability efforts, its commitment to improving access to justice, and its focus on operating as efficiently and cost-effectively as possible.

“We are still in a belt-tightening phase and we’re looking at all of our programs to see how we can do things better, which we’ve been very successful at over the last year,” he says.

In addition, the OSB’s ongoing endeavor to foster diversity within the profession will be a key priority during Piucci’s term. In November, the bar’s Diversity Section will host the Convocation on Equality. The event will celebrate the successes achieved since the first diversity summit held a decade ago and will reaffirm the bar’s commitment to inclusion within the profession.

“In the ABA’s recent diversity report inclusion is a central theme. It shouldn’t just be about certain kinds or groups of people. It should be about everybody being included,” he says. “Having said that, disability rights is probably the next big barrier that needs to be overcome. The Board of Governors is very sensitive to all of this and is dedicated to constantly recognizing each other’s differences and helping us all work together better.”

“Generosity of Spirit” Impresses Others
As he prepared to take over as bar president late last year, Piucci explained that his interest in leading the organization stems from a core value he learned from his parents: The importance of being active within your community and doing your part to make it better. And he is proud to know that his son, Joe, now a first-year law student at Lewis & Clark College’s Northwestern School of Law, has the same values.

Those who know Piucci say his commitment to making things better in every possible way is an ethic he lives each day, both personally and professionally. Multnomah County Circuit Court Judge Henry Kantor, who worked with Piucci at Pozzi, Wilson, Atchison, O’Leary & Conboy in the late 1980s, says he admires Piucci’s ability to find joy in nearly every possible situation.

“It’s been a wonderful experience for me to watch him grow and develop to reach this pinnacle as one of the elite and most experienced lawyers in Oregon,” Kantor says. “He is a strong advocate for everything he believes in, and the bar is extraordinarily lucky to have a leader like Steve. With all of the skills and talent he possesses, the bar is in good hands.”

Gene Hallman, a Pendleton personal injury lawyer and OTLA member, often partners with Piucci on construction injury cases and says he appreciates the mutual trust and respect they share.

“We don’t have to look over each other’s shoulders because we both know that whatever part of the case each of us does is going to get done correctly,” he says.

Hallman says he also enjoys the time they spend together as friends, such as when Piucci and his wife come to town for the Pendleton Roundup. Piucci enjoys road trips and opportunities to see the remote corners of the state, especially if bird hunting is part of the excursion, Hallman adds.

Oregon Secretary of State Kate Brown also has known Piucci for many years and says he is a lawyer’s lawyer with an immense “generosity of spirit.”

“He’s very warm and friendly, and he cares very deeply about making sure that all Oregonians have access to justice,” she says. “He really works hard to provide a voice for those in the legal system who don’t have one.”

The opportunity to serve as a member of the Board of Governors, Piucci notes, has been particularly rewarding.

“The lawyers who volunteer their time for the Board of Governors and other bar leadership positions are some of the greatest people I’ve ever met,” he says. “They believe in giving back and paying it forward for the good of the profession and all Oregonians.”

For his part, Piucci says serving as a bar leader is just one hue in his palette. “Looking for the beauty in life and in the people I meet best prepares me for my work, whether it is solving problems for clients or promoting what we do as lawyers for society.”

It’s an art the multifaceted Piucci, by all accounts, has fully mastered.