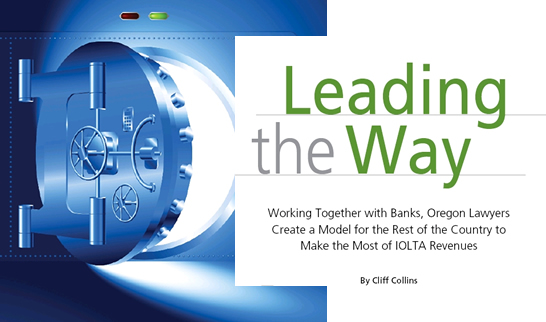 In an abysmal economy with record low interest rates, attorneys and law firms might assume that they need give little thought to where they park their IOLTA funds.

But the Oregon Law Foundation, the legal-services charitable entity created by the Oregon State Bar, is trying to alter that perception with this theme: “Where you bank matters!”

“It’s really important for lawyers to understand that where they bank matters,” says Norman R. Williams, 2012 president of the foundation’s board and a constitutional law professor at Willamette University College of Law. “By that one decision, they are making a contribution to the Oregon Law Foundation and providing funds for indigent and needy Oregonians.”

How is this so? After interest rates bottomed out at the end of 2008, they have remained virtually unchanged, and the impact has been felt in Oregon in ways that many lawyers are not aware of. Interest on Lawyer Trust Accounts — or IOLTA — supplies direct funding for the Oregon Law Foundation to make grants to legal aid and civil legal services providers in the state. Since OSB members voted in 1988 to make the IOLTA program mandatory for all lawyers and it became so in May 1989, the Oregon Law Foundation has awarded over $28 million for charitable, law-related purposes.

In Oregon, 75 percent of IOLTA funds go to legal aid services in all 36 counties in the state, provided by four agencies: Legal Aid Services of Oregon, Oregon Law Center, Lane County Legal Aid and Advocacy in Eugene and the Center for NonProfit Legal Services in Medford.

This year, Oregon’s legal aid programs suffered a 16 percent reduction in staff because of decreases in federal funding, low interest rates impacting IOLTA funding, loss of state general fund money, and decreases in foundation support because of the poor economy. To make matters worse, on Nov. 15 it was announced that 2012 federal funding for legal aid in Oregon would be further cut by $600,000.

At the same time, demand is increasing, says Sandra Hansberger, executive director of the Lawyers’ Campaign for Equal Justice. “There has been a 17 percent increase in poverty nationally since 2008. Legal aid offices are reporting even more demand; applications for food stamps are up again. You have an increase in poverty and a decrease in funding.

“I believe we’re in a crisis mode in funding for legal aid in Oregon,” Hansberger says. “This is the worst I’ve seen it.”

Moreover, she emphasizes that improvement in the IOLTA funding situation is not imminent. “The big drop is going to be in 2012.” That’s because the Oregon Law Foundation was able to fall back on reserve funds saved from earlier years when interest rates were higher. That reserve got spent down rapidly and now is depleted, says Judith Baker, the foundation’s executive director.

What Can be Done?
Against the backdrop, the foundation undertook a study to determine if Oregon should join about 40 other states in implementing what are known as comparability rules.

In those states, lawyers and law firms cannot put their IOLTA funds into accounts with banks that don’t pay interest rates comparable to the banks’ other business accounts. Williams says the states that imposed these rules did so after discovering that banks were paying very low interest rates on IOLTA accounts even when interest rates were high.

To the surprise of the foundation — as well as to the consultant, who had found the opposite to be true elsewhere — the report issued this past spring found that IOLTA funds would receive less interest under a comparability rule when rates are low, but also when rates are high, and thus less money would flow to the foundation.

The reason is what the foundation since 2005 has designated what it categorizes as “Leadership Banks.” These are banks in the state that currently agree to pay 1 percent interest on IOLTA accounts (called “Visionary Banks”) or at least 0.7 percent (“Advocacy Banks”). The banks have done this voluntarily.

“We believe that the best way to approach IOLTA is with a partnership,” says Linda Navarro, president and CEO of the Oregon Bankers Association. “We help promote participation to our member banks. Together, we’ve been really proud to support access to justice over the years.

“In Oregon, banks have voluntarily stepped up to pay interest rates at a competitive rate,” she says. “Judith Baker and the (foundation’s) board have done an outstanding job in reaching out to the industry and showing respect to the industry.”

As lawyers become more aware of the connection between IOLTA interest and funding legal aid, “it’s important for banks to take a close look at what they are doing,” Navarro says. Becoming a Leadership Bank “can help them be the bank of choice for more law firms. There’s a competitive advantage from being the bank of choice, but the industry also promotes it because it’s the right thing to do.”

Navarro adds that the voluntary approach Oregon employs serves as a model for the rest of the country, proving that working together voluntarily rather than having compulsory rules imposed produces better results.

And those results become palpably apparent when law firms switch to a Leadership Bank. Steve D. Larson of Stoll Berne, a member of the OSB Board of Governors and a former board member of the Oregon Law Foundation, says his firm had used the same bank for years to deposit its IOLTA accounts. But for a variety of reasons, the firm was looking to change, and found a Leadership Bank, First Republic Bank.

That bank pays 1 percent interest on IOLTA accounts, as opposed to 0.1 percent, the rate paid by Stoll Berne’s former bank. The foundation’s Baker says the difference in the foundation’s bottom line was immediately evident as a result.

“Access to justice has always been a big issue for our firm,” Larson explains. “We’re big supporters of the Campaign for Equal Justice. I served on the Oregon Law Foundation board, so I knew about the importance of interest rates to the foundation.

About 66 percent of the total of $150 million combined IOLTA funds now is deposited in Leadership Banks, Baker says. If the remaining 34 percent of that money were earning 1 percent in a Leadership Bank, that would mean an additional $500,000 annually to the foundation, she says. “An increase of $500,000 could be almost the cost of funding two rural legal aid offices. Another way to look at it is that it would fund eight legal aid lawyers for one year.”

Listening to Lawyers
Banks with a national presence sometimes exert control over their member banks at the state level to put interest rates at a certain amount. That happened with U.S. Bank this year, which directed its Oregon affiliate to drop IOLTA interest rates to 0.35 percent.

But when that occurred, the bank heard from Oregon attorneys and law firms: They pressured U.S. Bank in Oregon to continue its longtime participation as a Leadership Bank. “We have long supported the Oregon Law Foundation through the IOLTA accounts and are pleased to be able to continue to pay a healthy interest rate on these accounts despite a declining rate environment. It supports our citizens,” says U.S. Bank’s Angie Dilkes. The Oregon affiliate retains a 0.7 percent interest rate as a Leadership Bank. “They listened to the lawyers,” Baker says.

KeyBank has consistently been a Visionary Bank, and this past spring the foundation presented the bank its “Partners in Justice Award” for its strong support of the IOLTA program.

Pioneer Trust Bank in Salem has maintained a long-standing commitment to being a Leadership Bank and supporting the Oregon Law Foundation, according to Randy Compton, president and CEO of the bank and a member of, and treasurer for, the board of the foundation.

“My father was on the board when (the foundation) was getting started,” says Compton. “The bank has been a big fan and supporter of the foundation and the mission.”

He notes that the banks were pleased when the foundation’s comparability study found that Oregon’s “cooperative effort” was more effective than a mandatory rule, which “rubs banks the wrong way.” Banks have come to understand that participating in the Leadership program has “been good business for the banks,” at a time when they also realize that times are hard and the needs of our grantees are great, he says.

“It used to be, the banks charged a service fee” on IOLTA accounts, Compton adds. “Now that’s virtually down to nothing on the fee side. That’s tremendous support.”

Reduction in grants this year was spared what it could have been. “As a board, and Judith Baker in particular, we have dealt with this very prudently,” Compton says. “Over the years we have put a growth fund aside so that if interest rates get low,” there would be money to distribute in grants.

When interest rates were higher, the foundation developed the reserve in anticipation of being able to dip into it in an attempt to keep grant funding from decreasing dramatically when interest revenue fell. With interest rates plunging for several years now, the foundation had to spend down its reserve more quickly than it would have liked. Although it lost 75 percent of its annual revenue, the foundation was able to reduce grant allocations in 2011 by only 60 percent, thanks to the money set aside earlier.

Now that the reserve fund is depleted, legal aid is bracing for greater cuts. IOLTA money will continue to play an important part in providing access to justice, Hansberger knows. “We’ve made a pitch about ‘Where you bank matters,’ ” she says. “But it’s really part of our call to action, because it will make a difference in legal aid funding.”

“We really want Oregon lawyers to be cognizant that where they bank, can help improve this dire situation,” adds Williams. “That one decision in the hands of Oregon lawyers can have a profound effect.”