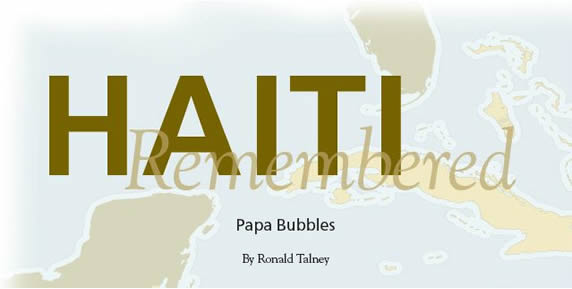 The devastating news out of Haiti of a 7.0-magnitude earthquake demolishing much of the infrastructure of the country, and in particular, the capital city of Port au Prince where millions of people live, struck me, as it did with so many around the world, with tremendous force as well, and immediately drew me back to my own experiences in that impoverished land. As I watch the horror unfold on the television screen day after day and night after night, and see the orphaned children wandering aimlessly in the rubble-strewn streets, their faces masked with concrete dust and blood, I am both distressed but also heartened. Distressed by the magnitude of the destruction and the loss of life, but heartened by the humanitarian aid at last flowing into the country. And I find myself reliving my own time in the mid-90s briefly working and living there with the Haitian people.

Haiti is a short hop from Miami. Within a matter of less than two hours one travels into the heart of the Third World. Port au Prince is a bustling city, crowded and noisy. The international airport, René Préval, named at that time for the then and present president of Haiti, is a sad collection of buildings with runways converging on a single concourse. As you leave the air-conditioning of the modern airplane and enter the lobby of the airport you are immediately struck by the humidity and the stench of humanity. It was here that I met, for the first time, Prosler and Stanley, two cousins who were friends of one of our party, young men he had met on a prior trip to Haiti, and who had agreed to be of help to us during our stay.

Prosler Dumorne was a handsome young man in his twenties and his cousin, Stanley Titus, is several years older. Prosler spoke very little English, but Stanley spoke it quite well. It turned out that he had an associate degree in computer science  a significant and rare accomplishment in Haiti  and wrote poetry. He speaks Haitian Creole, of course, as do most Haitians, and also French, which is the second official language of the country but not widely spoken, as well as Spanish, which is the language of the Dominican Republic, which shares the island of Hispaniola with Haiti. Due to the 80 percent unemployment rate in the country at the time, he would pick up what casual work he could, on a day to day basis, as would Prosler. Neither of them had ever had a steady job. Both live in Cite Soleil, the vast slum that is at the center of Port au Prince, which was home to over 300,000 people.

I was in Haiti for the purpose of making human rights evaluations to aid my legal work representing Haitian refugees in political asylum cases in the United States. It was 1996. René Préval was the duly elected president, having succeeded Jean Bertrand Aristide, the first democratically elected president of Haiti, who was ousted by military and paramilitary forces in a coup and lived in exile for three years while the United States negotiated his return to office. The Haitian constitution does not permit successive terms as president, and thus Préval was elected as his successor. Aristide was subsequently again elected as president, but was again forced into exile, and is in exile to this day. René Préval is, again, the elected president of Haiti. I had never been to Haiti before, although I had traveled and worked in other Third World countries. Nothing quite prepares one for conditions in Haiti.

It was the purpose of my visit to travel about the country and study issues of alleged human rights violations. To do so, I was privileged to interview people at all levels of Haitian society, from highly placed government ministers to ordinary people on the streets and in remote villages in the mountains. Especially during the time of the military dictatorship following the coup there had been reports of wide spread violence and abuse, particularly to anyone suspected of having supported Aristides election and the democratic process. I have represented a number of these Haitian refugees in political asylum cases in the United States and am personally aware of many of the abuses suffered by those who had fled the military junta and sought refuge in South Florida and, yes, in Portland, Ore., and elsewhere.

One of the conditions of my stay was that I was to volunteer a certain amount of my time to aiding nonprofit social service agencies working in Haiti. Although I am not Catholic, I took the opportunity to work with Mother Teresas Order, the Missionaries of Charity, which maintains an orphanage, the Home for the Destitute and Dying, and a wound clinic, all in Port au Prince.

The orphanage is for the many children brought in from the streets who have, in many instances, been abandoned by their parents, unable to feed them or care for them. Many of these children, as well as their parents, have AIDS and are dying. (Not a day went by in Haiti that I was not offered a baby by its desperate mother wanting me to take it back to the United States.) The orphanage consisted of a stark, one story building containing five large wardrooms. Children were separated by age group. The wards with the infants contained row after row of green, metal cribs, each with its tiny resident baby. The older children were in barren concrete rooms lacking even chairs or benches. I played with them sitting on the bare floor.

An inexpensive trick I had learned while doing election observation work in El Salvador, to break through the reticence of bashful children, was to carry a bottle of bubble soap and a plastic ring with me. There is nothing quite like the sight of an old white guy blowing bubbles to attract impoverished kids in a third world country. Pretty soon I needed only to enter a ward and the children, craving attention, would be yelling Iset (Here) Papa, Iset Papa. I became known as Papa Bubbles. My knowledge of Haitian Creole is not very good but, along with my soap bubbles, it was enough to make friends with all the children.

I spent a week working at the orphanage, mostly just entertaining the children as best I could. The nuns do the hard work of caring for them. My job was to give them as much personal attention and affection as I possibly could, something the nuns lack the time and, in some cases, the inclination to provide.

Every day there were at least a half dozen impromptu funerals. A child calling Iset Papa to me in the morning could be dead by the afternoon. Reality comes early in Haiti. These children are not shielded from anything having to do with life or death. The first time, the first morning I was there I heard the bells and I wasnt sure what was happening. I was playing with a group of children about 4 or 5 years of age in a far ward. They immediately ran out of the room and down the hall. I thought it was a fire drill and followed. Instead they circled around a little green crib in one of the infant wards and soon they began to sing. The nuns gathered too, as did the few parents who happened to be visiting their dying children at the time. A few words in Creole were said, prayers were offered, and then the dead child was taken away. The crib was washed down and received fresh linens. Within a half an hour another baby occupied it.

The Home for the Destitute and Dying is a facility for adults, many dying from AIDS. I spent several days working there too. Mostly I gave massages, cut hair and fingernails, and fed residents too ill to feed themselves. I recall feeding one elderly man in a wheel chair. He had a bowl of disgusting looking gruel, a sickly, brown soup with soggy lumps of bread floating on the top, and couldnt manage to get the spoon to his mouth. I remember giving him a spoonful and hearing him groan with satisfaction. His body literally shook with the pleasure of what he was consuming.

The wound clinic was a storefront in downtown Port au Prince where people living on the street could come to have wounds cleaned and dressed. The procedures were fairly primitive. People with open wounds would come in and wait their turn. You then attempt to clean the wound, which meant, in most cases, plucking out the maggots with tweezers and making the wound antiseptic. Then the wound is redressed and the patient sent on his way. I spent evenings working at the wound clinic.

Having earned my right to freely travel about the country and do my work, I spent several days in Cite Soleil, where Stanley and Prosler lived. Each lived with his family in a corrugated, one-room shanty, with no kitchen and no bathroom. There was a dirt floor. Eleven family members lived with Prosler. They slept on the four cots in shifts. Food was prepared in the back yard on makeshift grills. A large gully that cut past the back of their house was the bathroom and sewage eventually worked its way down into the bay.

My work took me to many parts of the country, out of Port au Prince and into the countryside, often into villages that had no access roads. I would leave the car and walk miles on mountain paths until I would come to a small gathering of makeshift houses. Even though they did not know me or know I was coming or why, I would always be welcomed. It was like arriving from another planet.

It is impossible to fully describe the experience of Haiti. And now in the aftermath of the earthquakes devastation, it is even more difficult to know its future. It is too easy to just say it is the poorest country in the Western Hemisphere and let it go at that. The people are too endearing to be so casually dismissed. No matter how poor, no matter how difficult their lives, they are the most generous people I have ever encountered.

Haitian society has numerous sayings passed down through the generations that guide the daily life of the people. One, for example, is that a pot of food has no owner. Another is that one cannot eat okra with a single finger. No matter how hungry, no matter how poor, no matter how humble, you are always welcome.

Another saying, spoken during periods of drought, is that the season of pain is never over until the sky begins to weep. Perhaps the most oft heard is one that is frequently found carved onto small, wooden bells and sold on the streets as souvenirs: No one hears the cries of the poor, or the sound of a wooden bell.

And yet, despite the violence of daily life and the despair that is habitual in Haitian society, more so today than ever, no one is turned away.

Not even an old white guy blowing bubbles.

ABOUT THE AUTHOR
Ronald Talney, a retired public interest lawyer who lives in Lake Oswego, is the author of four books of poems. A fifth book, a collection of new and selected poems, will be published in early 2010 by Plain View Press, Texas. He has also published a juvenile mystery novel, as well as numerous articles and essays.