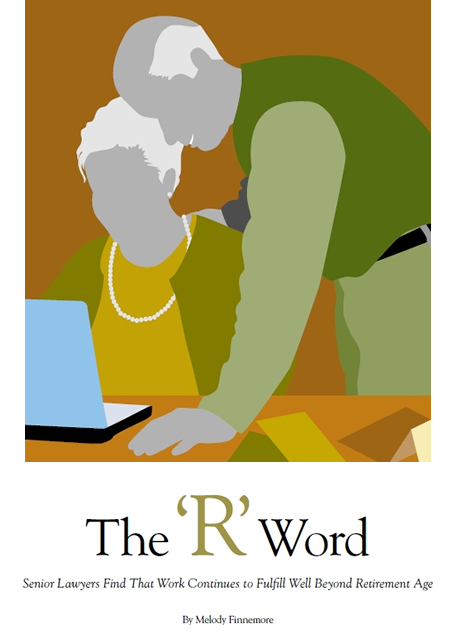 Hood River attorney Wayne Annala has a standard response to those who ask him when he plans to retire: “I tell them, ‘You’ll know I’m retired when the local mortician rolls me out of the office on a gurney.’”

Several Oregon attorneys share Annala’s sentiment, preferring to work full time, or close to it, even after 50 or more years in practice. For this article, a handful of those attorneys shared their reasons for refusing to retire throughout their 70s and into their 80s. None of them needs to keep working for financial reasons. Instead, they each have a personal motivation for continuing their professional pursuits.

For his part, Annala, 78, says boredom would set in quickly if he retired. He established his practice in 1961 and, as a small town “general practitioner,” has handled cases ranging from small collections and bankruptcies to defending accused murderers. As a partner in Annala Carey Baker Thompson & VanKoten, he now handles mostly sales and acquisitions of real estate and business ownerships; preparation and administration of revocable trusts and wills; and substantial probate practice and post-death estate litigation.

Annala, the first recipient of the Edwin J. Peterson Professional Award given by the Oregon Bench/Bar Commission on Professionalism in December 2005, says he has never been one to take extended vacations and at no point has considered retiring.

“I don’t like to fish and I don’t play golf and I don’t want to build bird houses to keep myself occupied, so what would I do if stopped practicing law? I would probably start drinking at eight in the morning, wreck my liver and be dead in six months,” he says.

Annala adds that while he’s joking about the early-morning libations, he’s serious about the intellectual need to keep working. Millions of other elderly Americans agree with him. According to the Pew Research Center’s Social & Demographic Trends project, a nationwide study found that 54 percent of workers ages 65 and older say the main reason they work is because they want to. While 17 percent said they need the money, another 27 percent said a combination of financial need and desire keeps them in the workforce past retirement age.

Job Satisfaction, Appreciation Continue to Grow
Portland sole practitioner Richard Bayless has concentrated primarily on business law and litigation throughout his career. He says he keeps practicing because he enjoys the people he works with and the nature of his work.

“I’ve never considered retirement unless some failure of my health required it,” says Bayless, 79. “I feel very fortunate to have found something I enjoy doing.”

Former OSB president William Wheatley, 77, a partner with Jaqua & Wheatley in Eugene, began doing trial work in 1959 and continues to enjoy the challenge of preparing cases for trial.

“In addition to that, trial work for me is really stimulating and exciting because I get to learn so much that I would not otherwise learn,” says Wheatley, who won a $25 million verdict in favor of the state of Oregon in 2002 after the New Carissa ran aground off the coast near Coos Bay.

“Prior to the New Carissa case, I knew very little about maritime law. I’d never talked to an admiral or salvage expert in my life, or gotten into oceanography,” he says. “I’ve had a whole lifetime of wonderful experiences and knowledge that I would not have had otherwise.”

Tom Cooney, a litigator with Cooney & Crew in Lake Oswego, says he relishes the problem-solving and critical thinking strategies that go into his work in administrative law and licensing related to health care.

“I’ve always considered practicing until I drop dead,” says Cooney, 70. “I have two sons who work with me, and it’s kind of fun to practice with them.”

For Phil Ringle, a municipal judge for the City of Gladstone since 1965, the chance to make people’s lives a little better drives him to continue working. Ringle, 80, is the longest sitting, same-court judge in the state.

“It’s an honor to be a judge, and it’s also a challenge to be a small court judge,” he says. “More people are introduced to the system through the municipal court and justice of the peace than any other court, so we have a duty to make the experience as pleasant as possible.”

Myriad Changes Take Place Over the Decades
This venerable group has seen plenty of changes unfold within the profession since they began practicing. Not only has the bar’s membership skyrocketed over the last 50 to 60 years, but technology has evolved at a breakneck pace.

Bayless says he remembers when electric typewriters were cutting-edge technology. And each member of the group reminisced about carbon paper used to duplicate paperwork — back when much fewer copies were required for each case.

Cooney jokingly calls e-mail the “work of the devil” and many — not only of his generation but those who came after — often share that feeling because of the never-ending demand for constant attention e-mail can generate.

Still, others of Cooney’s generation find that technological advances have proven beneficial. Wheatley says PowerPoint presentations are a wonderful means of communicating with juries, judges and other audiences of the cases he litigates.

In addition, he points out, the ability to work remotely while traveling and spending time with his family most likely has extended his desire to keep practicing because he isn’t tied to his office all the time.

When it comes to other big changes for the profession, Annala cites the proliferation of court rules, many of which seem unnecessary in his view. “I suppose others would say, ‘Well, we need rules,’ but it’s just a tremendous burden on lawyers’ time to have to read through them.”

Another significant shift, according to Annala, is the expense of trials. “They never were cheap, but they weren’t outlandishly expensive 30 or 40 years ago like they are now,” he notes.

Cooney says the rise and fall (and rebirth) of professionalism has had an impact. He says the field seemed to become more cut-throat as the bar’s membership expanded, and lawyers treated each other — and others in the courtroom — less professionally, perhaps because of greater anonymity among members.

However, within the last 10 or 12 years, professionalism has taken a definite turn for the better, Cooney says.

“Lawyers, I think, now are trying to treat each other, witnesses and others with more respect,” he says.

Challenges Persist, Even for Seasoned Professionals
Legal malpractice, according to Cooney, became a larger concern as claims became more frequent. For senior lawyers, the issue carries even greater weight because their age and, therefore, their mental capacity, may be under more intense scrutiny than younger lawyers.

“Legal malpractice dictates what we can do and what opponents agree to, as well as the decision about how to practice law,” Cooney says. “You’re constantly forced to consider whether to relinquish your license to practice law, and that can be a pretty heady decision.”

For Ringle, the challenge lies in changing people’s stereotypes about judges, attorneys and the legal system in general. Many people who come through his courtroom — where the greatest number of cases involve major traffic misdemeanors — don’t want to be there in the first place. They often are hostile because of their perceived notions of the legal environment and the proceedings that take place there, Ringle says.

“I really have come to enjoy working with the people who are the defendants and introducing them to the fact that judges are there to make sure justice prevails,” he says. “I’ve grown to appreciate that challenge and I enjoy meeting that challenge.”

Ringle does hear his share of unusual excuses in traffic court. However, no matter how outlandish the defendant’s story, Ringle’s goal is to treat every defendant politely as he delivers his verdicts.

He recalls one young man who came through his court for driving under the influence. After the arraignment, the young man committed suicide because he had received the DUI. Though Ringle understands he wasn’t responsible for the young man’s death, he still takes it into consideration when he deals with other defendants.

“People are scared to death when they come in here sometimes. I think you need to treat people with respect and dignity,” he says.

For Annala and Wheatley, the challenge lies simply in getting the day-to-day work done efficiently. Schedules often are hard to coordinate, administrative duties take up precious time, and it can be difficult to keep up on the latest information related to a particular practice area.

Experience Trumps Misperceptions About Senior Lawyers
The most common misperception about senior lawyers, according to the group, is that they are no longer mentally capable of doing their jobs to the best of their ability. However, the experience they hold and the emotional maturity they bring to the job negate that notion entirely.

“I think you look at things perhaps a little differently, and you can see through the fog a little better,” Bayless says with a chuckle.

Annala says most of his work involves large, complex financial transactions that he wouldn’t have been trusted with as a young practitioner. “I’ve got the experience in spades, so people come in and trust me with the major events of their lifetime,” he says.

Cooney agrees that decreased capacity is the major misperception facing senior lawyers. However, senior lawyers also need to realize when they are past their prime in certain areas. For example, Cooney no longer teaches trial practice anymore because the jurors are younger and have a different mindset. Instead, he leaves the teaching to younger attorneys who are more in touch with that mindset.

“I think you have to have a lot of introspection about whether you are current enough on topics to continue practicing or teaching them,” Cooney says.

Keeping Things Interesting in the Day-to-Day of It
The changing nature of legal practice, from the evolution of the law to the different circumstances involved in each case, keeps this group intrigued as they go to work each day after 50-plus years in the profession.

“Almost every case is a challenge because every case is different. You usually learn something about life in every case,” Bayless says. “Everything is interesting it seems, and I don’t have to work at it.”

For Annala, the rigors of a small-town practice don’t necessarily make it exciting or enjoyable every day. The reward comes on those rare occasions when he is able to formulate an agreement that satisfies both sides of a case.

Wheatley says his professional life is kept interesting thanks to the luxury of eliminating the cases that aren’t compelling.

And Cooney, who has also served as a teacher and pro tem judge during his career, realized from those experiences just how happy he is when he’s practicing law.

Each member of the group admits they have friends, colleagues or family members who question their desire to keep working well into their so-called retirement years. For the most part, though, anyone who knows them well understands why they do it.

“My wife is resigned to the fact that I’m not going to retire,” Annala says. “As to all the rest of the people in the world who put up with me, not a one of them has come up and said to me, ‘You know, you really ought to retire.’ And it makes me feel good that my clients don’t want me to retire.”

Wheatley says his wife of 54 years is supportive and wants him to do what makes him happy.

“Although if I told her I was taking a six-month sabbatical to travel to Europe, that would not be undesirable to her,” he says with a laugh.