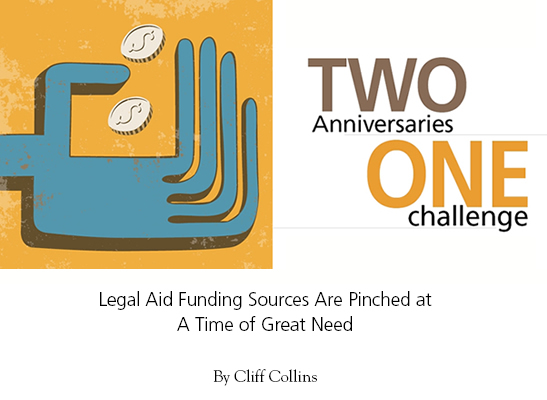 Lucy” came to the Salem legal aid office five years ago when she was 40 years old. Diagnosed as schizophrenic when she was in her early 20s, she’d had a difficult life. Lucy (not her real name) had been in abusive relationships and was unable to care for her children. Over the years she had worked at a cannery, but it was seasonal and never enough to support herself. She would have been homeless had she not been in these relationships, or periodically had family support her.

“At the time she came to see us, she had been denied SSI benefits at several levels,” says Michael A. Keeney, regional director of Marion-Polk Legal Aid Service in Salem, an office of Legal Aid Services of Oregon. SSI — or Supplemental Security Income — is a federal program for the low-income elderly or people with disabilities.

“Shortly after she came to see us, she was deemed qualified for the Oregon Health Plan and was finally able to get on medication. When she was on medication, her auditory hallucinations would stop, but on occasion she would go off her medication. All the doctors who examined her concluded that she was disabled, but it was difficult getting all of the right kind of information,” Keeney says.

After years of moving this case through the federal Social Security system, the legal aid office finally got a decision awarding benefits. Lucy started receiving $674 per month, allowing her to pay for food, rent and other basic needs, and giving her access to other programs such as food stamps and subsidized housing if she needs it.

“This is really the first time in her life that she has some means to support herself, and not have the threat of homelessness lurking in the background,” Keeney says. “When I last saw her, she thanked us for our work. And, even though her life is still difficult, I knew we had made a difference.

“Sadly, there are many people like Lucy who need help and are turned away because of lack of resources.”

This year marks the 75th anniversary of legal aid in Oregon, and the nonprofit organization that helps fund legal aid is observing its 20th year. These significant milestones are tempered by a distressed economy, high unemployment and modern-record-matching poverty rates.

The Great Recession took and continues to exact its toll, impacting access to justice across the state. Conversely, as the need for services for the affected population continues to go up, the amount of money available to supply those needs has fallen.

“The rate of the poverty population, of people in the state in poverty, is higher,” says Legal Aid Services of Oregon’s executive director, Thomas J. Matsuda. “The number of people looking for legal services is higher.”

Nearly 800,000 low-income Oregonians now are eligible for legal aid services, and the need has increased under pressure from a weak economy,” says Sandra Hansberger, executive director of the Lawyers’ Campaign for Equal Justice, the nonprofit fundraising arm of legal aid in Oregon.” Studies show that fewer than 20 percent of the legal needs of this population are being met each year.

The applications for services and the kinds of cases legal aid offices are seeing have remained similar to before the recession, but there are more of them. In most years, around 40 percent of all cases legal aid handles are related to family law, almost all of which involve domestic violence. But the reported instances of domestic violence have been more frequent, and the severity greater, according to Matsuda.

Also on the increase have been challenges to the denial of unemployment benefits, and higher rates of foreclosures, especially affecting tenants who live in properties where the owners are in foreclosure. The rate of bankruptcies also has risen, of course, so “some of what we’re doing is counseling about whether bankruptcy is the right way to go,” he adds.

Similar cases and jumps in volume are mirrored in the populations seen by the OSB’s Modest Means Program over the past two years. George Wolff, administrator of the OSB’s Lawyer Referral Service and Modest Means Program, says referrals for clients requesting help with landlord-tenant matters rose 226 percent; criminal law referrals increased 105 percent; and family law referrals are up 51 percent. In addition, over the same period of time, referrals by the Lawyer Referral Service for foreclosure cases have jumped 240 percent over the past two years.

“Tara” had an abusive husband who continually violated the restraining order she had obtained. She felt the situation was dangerous, and so she left a secure job and moved with her young son to another city. When the state Employment Department denied her claim for temporary unemployment benefits, she was cut off from the only means of support available during her search for a new job. With the assistance of a legal aid attorney, she challenged the decision, and the Oregon Court of Appeals reversed and remanded. Tara now works for the fire department in a small town.

Lawyers Step Up Their Help
Heartening news, though, is that the number of lawyers volunteering to help with their local legal aid office has increased, according to Matsuda. For example, the Hillsboro office is working with Intel Corp. to run a pro bono clinic staffed by Intel attorneys, who advise legal aid clients on consumer matters.

Legal Aid Services of Oregon runs 12 regional offices. In 2007, 595 volunteer attorneys participated in various pro bono projects operated by those offices. By 2009, that number increased to 748 volunteers, about a 26 percent jump in two years. This figure indicates only the number of attorneys who made themselves available to do pro bono work; it does not reflect the number of clients assisted or the number of cases taken. Indeed, some of the attorneys who agreed to participate probably took multiple cases during that time, according to Matsuda. “But it does show an increased willingness to help as things got worse for low-income Oregonians in the recession.”

Some of what Legal Aid Services of Oregon and the Oregon Law Center do to support pro bono activities includes operating the Pro Bono Oregon listserv, which provides weekly e-mails to volunteer attorneys describing cases needing pro bono assistance. The listserv started about five years ago, and by the end of 2007, 168 attorneys had joined. By the end of 2009, total listserv volunteers increased to 233. So far this year, the total has jumped to 312.

In addition, attorneys statewide are reaching deeper into their pockets to help pick up the slack of paying for legal aid. “Lawyers really have been stepping up to help with the campaign,” says Hansberger. She notes that although overall charitable giving in 2009 was down in Oregon, donations to the campaign did not drop last year. Lawyers are “recognizing the incredible need, and stepping up their contributions.”

About 70 percent of the lawyers in state’s large law firms give to the campaign, and in counties all across Oregon, “we have volunteers trying to raise money,” she says. Attorneys in Salem increased their giving from their annual fundraiser, and lawyers in Medford, Eugene and other cities “recognize the serious demand put on legal aid offices and the need to pitch in and help the cause. We’ve seen incredible participation by young lawyers.”

In terms of the percentage of its lawyers who donate, Oregon’s rate of giving is among the highest in the nation: about 20 percent of the bar. Since the campaign’s founding in 1991, the Oregon legal community has helped the campaign raise more than $17 million for legal aid.

Funding Sources Fall
“John” is an 85-year-old World War II veteran who served with distinction. Orphaned at birth in rural Wyoming, John was raised by foster families and joined the military at 16. After military service and a lifetime of work, John applied for Social Security retirement benefits in 1993. His application was denied because he could not produce a birth certificate. John thought he was out of luck until he called legal aid. Legal aid attorneys helped him get benefits. He is now able to pay for rent, food and medical care.

Legal aid representation is provided in 19 communities across the state and is limited to serving high-priority needs: food, shelter, medical care, income maintenance and physical safety. The 100 lawyers employed by Oregon’s legal aid programs directly help more than 20,000 clients each year, with the mission of achieving justice by providing a full range of civil legal services.

The programs have successfully litigated a number of difficult cases, with priorities on domestic violence, public benefits and housing issues. They supplement the work of its staff offices through toll-free hotlines, websites, community education materials and classes, outreach to outlying areas and referrals to volunteer attorney programs.

The largest source of funding for legal aid in Oregon is from court filing fees, at 36 percent of legal aid’s budget, according to Judith Baker, executive director of the Oregon Law Foundation and legal services program manager for the OSB.

The second-biggest source of revenue for Oregon’s legal aid programs is money derived through the federal Legal Services Corp., which comprised about 26 percent of Oregon’s legal aid budget for 2009. Federal funding has fallen far behind the rate of inflation and does not cover the increasing number of eligible clients in Oregon, Baker says.

IOLTA — Interest on Lawyer Trust Accounts — is the third-largest source of funds for legal aid in Oregon at about 10 percent. The legal aid programs receive additional funding from the private bar campaign and from about 80 government grants and contracts.

In Oregon, 70 to 75 percent of IOLTA funds — which are distributed by the Oregon Law Foundation — go to legal aid agencies, mainly to the Oregon Law Center, Legal Aid Services of Oregon, Lane County Legal Aid and Advocacy Center in Eugene and the Center for Nonprofit Legal Services in Medford. The amount of IOLTA revenue received by the foundation and available for legal aid has been “decimated” by the meager interest rates on IOLTA accounts Baker says. “We’ve lost 75 percent of our IOLTA revenue.”

The high point was 2007, when IOLTA funds earned $3.6 million. For 2011, the projected total is expected to dip to less than $900,000. Without the help of the foundation’s Leadership Banks — banks that agree to give a higher interest rate on IOLTA accounts and waive all fees — the IOLTA revenue would be much worse than it is, she adds.

Thus, legal aid advocates — while celebrating their milestone anniversaries and years of accomplishment -- enter their new fundraising season with their fingers crossed. They hope lawyers will continue their faithful volunteer and financial support during persistently tough economic times.

ABOUT THE AUTHOR
Cliff Collins is a Portland-area freelance writer and a frequent contributor to the Bulletin.