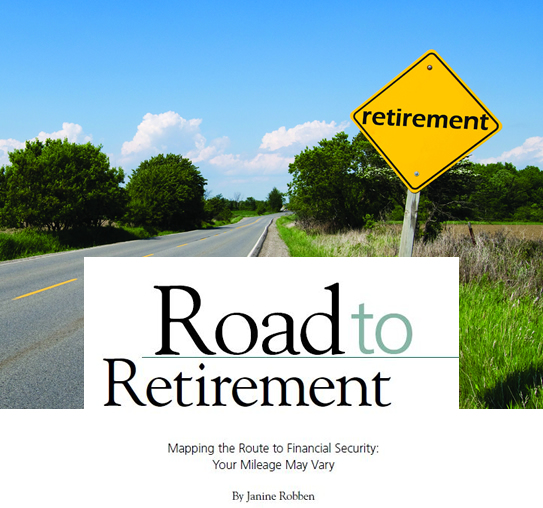 Mike Long has talked to hundreds of lawyers about retirement during his 15 years as a peer counselor for the Oregon Attorney Assistance Program (OAAP).

“For many,” says Long, “the real anxiety or question has been: ‘If I’m not practicing law, what will I do? Who will I be?

So thank goodness for the new economy, which has given us something else to worry about: when, if ever, will we be able to afford to sit in our beach chairs, drinks in hand, and fret about who we are?

The answer to that question, says financial educator Pat Funk, is that lawyers are uniquely well-equipped to have the next stage of life be both meaningful and, if necessary, income-producing.

“Retirement as our grandparents thought of it was almost like a drop off a cliff,” says Funk, the co-author — with Long and certified financial planner John Clyde — of the book Lawyers at Midlife: Laying the Groundwork for the Road Ahead. “That’s not valid anymore. Sixty-five is the new 55, for some the new 45, both physically and cognitively. Our generation is going to redefine retirement. I don’t think many of us will drop off the cliff.”

This is good news, especially for lawyers who were born during the 1946-64 baby boom, the oldest of whom are approaching the traditional retirement age of 65. (There are a lot of them, so many that the Oregon State Bar has a Senior Lawyers Task Force looking at multiple issues relating to the aging of the profession.)

The key to Funk’s optimistic vision of retirement, as she and Long stress in the “Next Stage” retirement-planning workshops that they’ve been doing statewide since 2002, is “laying the groundwork.”

“How did the OAAP get into the retirement business?” Long asks rhetorically. “We’ve gotten calls from firms concerned about the cognitive functioning of some of their older lawyers. One was facing a 90-day suspension. I asked him, ‘What kind of plan do you have in place for retirement?” The answer was, ‘Very little.’ This lawyer had been going month to month, draw to draw, for 40 years.”

Forty years that, presumably, included better times than some lawyers are experiencing now.

“We are living in a very, very tough economy,” Funk acknowledges. “But I think the media is doing us a great disservice in its focus on the bad economy. What’s more important is not the economy, but your economy.”

To lay the economic groundwork for your retirement, says Funk, you have to answer three questions: how long you are likely to live; how much income you will need over your remaining anticipated lifespan; and when you are going to retire.

“If you live into your 80s and 90s and make your retirement transition in your 60s, that gives you about 20-30 post-retirement years to plan for,” she points out.

The other two questions — how much income will you need and when are you going to retire? — are intertwined because, for many people, the answer to “when?” hinges on the answer to “how much?”

“Some people say, ‘Oh, I couldn’t live on $60,000 a year,’ ” Funk says. “Others say, ‘I couldn’t live on $150,000.’ It depends not so much on the dollars but on what you do with those dollars; what you need from those dollars. If you go to a financial planner and he says, ‘What are your assets?’ and ‘This is what you need,’ leave, because you can’t start from there. If you’re a person who says, ‘I want to die in my house,’ you’re in a very different position from a person who says, ‘I want to stay in Portland but downsize’ or ‘I don’t want to live in Portland; I’m moving to Florida.’ ”

That said, Funk says you can get a ballpark figure by subtracting the amount of annual income you expect to have from a pension or its equivalent and Social Security from the amount you expect to need to live on each year. That will give you the annual “gap” that you’ll have to fill by some other means: investing more aggressively; increasing saving for retirement; delaying retirement; reducing your standard of living; working part-time; or deciding that you don’t need to leave an estate for your heirs.

“Do your own financial roadmap,” Funk concludes. “Figure out what your own resources are and where you want to go. Only you can determine what number you’re comfortable with, based on your own investment risk profile.”

Cash Is Good, Debt Is Bad
If you go to a retirement planner, you’ll likely hear about the “three-legged stool.” That stool is made up of Social Security benefits (which are intended to replace no more than 20-40 percent of your pre-retirement income); taxable investments and savings; and pensions or tax-deferred savings, both of which grow at a faster rate because taxes on them are deferred.

“The three-legged stool is getting a little wobbly,” Funk acknowledges, “but it’s still a good tool.”

According to Funk, her economics education presentation “hasn’t changed dramatically from a year ago, despite the changes in the economy.”

“The fact is, most of us weren’t doing the right things in the past,” she says. “The most important thing is: Get your priorities in order. Cash really is king today. Having cash reserves gives you a very comfortable foundation. And debt management and a good credit score will make the difference in a number of things. For example, right now — unless you’re a really terrible driver — insurance companies look more at your credit score than at your driving.”

In Funk’s view, managing debt is key to a great retirement.

“If you’re not living beneath your means now, you’re penalizing your future,” she warns. “This is critical. The average credit-card debt per household is now in the double digits. People say, ‘I can’t get a seven-percent return on my investments anymore.’ But if you’re reducing debt at 15 percent, you are getting that return.”

Other keys to a great retirement, Funk says, are maintaining your health, staying active and preventing financial disruptions.

“The incidence of divorce is higher, in the early years of retirement, than at any other time except the early years of marriage, where you may realize that you have made a mistake,” says Funk, citing a couples retirement study done by Fidelity Investments in 2007. “You or your partner may have changed in the last 20 years, or your careers may have kept you apart except for dates. Now you’re spending 24 hours a day together.”

If trading debt for cash and minimizing financial disruptions are “keys,” Funk says that there also are retirement “traps.”

Those traps, and her thoughts on them, are:

n   “Relatives suffering from a lack of money.” (“Whether you help them is your choice.”)

n  Failing to take into account your likely increased longevity. (At age 50, Funk bought a long-term care insurance policy, with a five percent inflation rider, which she says leaves her freer to plan and spend her retirement resources.)

n  The cost of health care. (Ask what it would cost to continue with your present insurance after you retire, if that’s an option, and use that cost as a basis for comparison-shopping.)

n  Taxes. (If you’re moving to another state, look at both that state’s income tax and what assets are taxed.)

n  Overstating your assets and likely returns on your investments. (“Stocks and bonds don’t need to drop and stay down to impact your retirement planning: they just have to drop at the wrong time,” says Funk. “The critical time frame is the five years before and the five years after you transition into retirement. If a dip takes place within that zone, it’s more difficult to overcome. Once you transition to where you’re living off your accumulated savings, mistakes become more critical.”)

Funk, who describes herself as a financial educator rather than a financial planner, acknowledges that it can be difficult to find expert help to avoid these traps.

“Many of us have a financial adviser helping us with wealth accumulation,” she says. “But most of these aren’t prepared to help us plan for wealth distribution. Retirement income planning is a relatively new field.”

Who Am I, If Not This?
For some lawyers, retirement does not generate the “What will I do, who will I be?” angst that Long has heard from their colleagues.

“There are lawyers for whom the practice of law is just like working in an automobile factory,” says former Portland appellate attorney Katherine O’Neil, who now does mediation and arbitration part-time. “They clock out when they think they have enough money.”

But the majority of Oregon lawyers don’t fall into that category, according to two online retirement surveys taken by the OAAP in 2006. (The initial survey was sent to 6,000 active and inactive bar members who were 50 and older. A follow-up survey was sent to almost 1,900 active and inactive members who were born between 1957 and 1964, and thus also were “baby boomers,” even though they were still under 50.)

Twenty-eight percent of the older respondents said that they plan to retire completely and not work for pay by age 65.

Eleven percent were at the opposite end of the scale, saying that they plan to continue practicing, full- or part-time, until they are physically incapable of doing so or they die.

The percentages for the younger group were almost identical.

“The vast majority were not hoping to just walk away, but to only work with the clients and cases they wanted,” says Long. “They wanted more control over their schedules and time.”

“Intellectual stimulation is the number-one reason why they became lawyers and what they enjoy about being lawyers,” says Long. “That’s one of the common values that those who enter this profession share. The New York Times crossword just doesn’t cut it. To have a satisfying next chapter, you have to be addressing these nonfinancial aspects of your life as well as your finances before you leave the full-time practice of law.”

“I have to admit to a little trepidation,” she says of when she faced her plan to phase out her full-time practice. “I thought I might really miss it. Once you quit working, you lose your edge in any area of practice; you’re not up-to-the-minute.”

But O’Neil had laid her groundwork. Twenty-five years ago, she had visited China as part of People to People International and seen how the Chinese resolved many civil conflicts, especially those related to employment and family, through mediation.

“The idea would have been revolutionary in Oregon 25 years ago,” she points out.

So she began taking courses in mediation and gradually, as her “retirement” date approached, accepting more and more mediation cases and fewer and fewer appellate cases.

In addition to mediation, O’Neil is on the American Bar Association’s Board of Governors, which she describes as “exactly like having (another) part-time job.”

For her, her current status —what Funk would call “phased-in retirement” — is a perfect mix of both worlds.

“I don’t work weekends at all anymore,” says O’Neil as she prepares to leave on a lengthy float trip down the Rogue River. “It’s just lovely.”

At the same time, she says, she “absolutely” still self-identifies as a lawyer — work for which she endured a year at then female-unfriendly Harvard Law School in the early ’60s before starting over 13 years later at Lewis & Clark Law School.

“I believe that the law is a learned profession,” she says. “That’s been my practice. The law will always be part of my identity.”

O’Neil’s experience is one that other Oregon lawyers are hoping for, planning for or enjoying in their own lives. (See related story.)

“Perhaps a generation from now,” says Funk, “there will be another word for retirement that more adequately reflects this stage.”

ABOUT THE AUTHOR
Janine Robben has been a member of the Oregon State Bar since 1980. She is a frequent contributor to the Bulletin.

To calculate your life expectancy, given your particular circumstances, use the Alliance on Aging Research’s “Living to 100” calculator, http://www.livingto100.com.