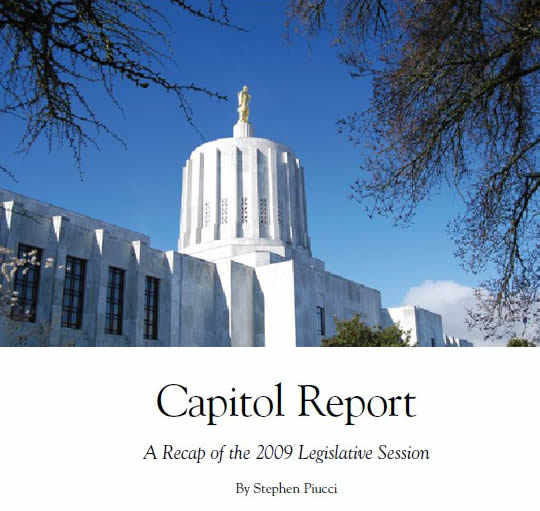 Those of us who have followed the legislature for years often think that we’ve seen everything and believe that most of what happens is entirely predictable. And since we’ve all got our own opinions on what they should do differently in Salem, it’s easy to criticize the legislature’s decisions from afar and to pat ourselves on the back for our wisdom when some legislative plan goes astray.

However, I think it’s fair to say that 2009 really was different and that even those of us who remember the rough sessions early in the decade were unprepared for the magnitude of the difficulties that this current recession brought. When laying off 200 employees and slashing your budget 7.5 percent constitutes a generous budget compared to other recipients of state funding, we know we’re in uncharted territory.

There were some major changes this session. Buried behind the coverage of the budget battles, and a handful of hot-button issues, are hundreds of other bills that get little or no press coverage, but which are often very important to our clients. Only a few are mentioned below, but there are of course many more. I encourage each of you to get a copy of 2009 Legislation Highlights later this fall for a more thorough discussion of the important changes that came out of this session. You can also read all the new bills on the legislature’s website at www.leg.state.or.us.

Here are a few of the more significant actions the legislature took that will affect the practice of law.

Consumer Protection
With many Oregonians in financial straits, consumer protection measures were on the minds of many legislators.

The legislature gave the Department of Justice authority to sue debt collectors for unfair collection practices. Exempt funds directly deposited in bank accounts will not be subject to garnishment up to certain limits, and the homestead and vehicle exemptions were increased. Foreclosing lenders will have to consider loan modifications in good faith, and tenants in foreclosed properties will have somewhat greater rights than under current law. The legislature passed bills regulating certain mortgage lending practices and requiring increased regulation of loan originators and debt settlement companies.

The legislature also increased maximum personal injury protection benefits for the first time since 1989, at the request of the Oregon Trial Lawyers Association (OTLA). The change raises the maximum monthly income replacement payment from $1,250 to $3,000. This increase, while significant, is less than proponents initially requested.

Tort Claim Limits
A work group composed of representatives of the state, OHSU, OTLA and local government hammered out an agreement to establish new damages limits for tort claims against the state and local governments. SB 311, the ultimate product of that group, is a response to Clarke v. OHSU, in which the Oregon Supreme Court threw out the current $200,000 limit as applied to a negligence claim against OHSU. Clarke involved a young boy who was severely disabled as a result of alleged medical negligence.

SB 311, which took effect July 1, applies to causes of action against the state arising on or after Dec. 28, 2007, the date of the Clarke decision. This bill establishes a two-tiered system providing higher limits for claims against state agencies, including OHSU, than for claims against cities, counties, school boards and special districts. The new caps for claims against local governments apply to causes of action arising on or after July 1, 2009. Lower caps were considered justified for local governments, since the level of risk cannot be spread out across the state.

Ultimate Repose
SB 284-B increases the Oregon statute of ultimate repose for product liability actions from eight to 10 years. Moreover, the statutory period in the state where the product was produced or into which it was imported from a foreign country applies if it is longer than Oregon’s. Manufactured houses and products provided by physicians are generally excluded. Finally, product liability actions arising from the use of halide or mercury vapor light bulbs are not subject to any statute of repose. The bill applies to causes of action arising after Jan. 1, 2010.

Administrative Procedures Act Amendments
SB 274-B* amends provisions of the Administrative Procedures Act that relate to the Office of Administrative Hearings (OAH); it will increase the independence of the OAH to some extent. The bill limits agencies’ ability to modify hearings officers’ findings of historical fact and requires more extensive disclosure of ex parte contacts. A five member advisory committee, one of whom will be appointed by the bar, will consult with the Department of Justice when it adopts model rules of procedure for contested case hearings.

Judicial Department Budget Sustains Cuts
In light of the state’s finances for 2009-11, the Oregon Judicial Department (OJD) came out of the legislative session in good shape relative to the cuts that seemed likely earlier in the year. The department’s budget bill for the 2009-11 biennium cuts roughly 10 percent of the department’s general fund allocation from the last budget cycle, but lawmakers hope that some of that shortfall can be made up with funds from HB 2287-B, the court fee bill described below. In addition, the governor used his line-item veto authority to restore an additional $6.3 million to the department, which will restore the OJD budget closer to a 7.5 percent general fund reduction. Even so, substantial staff reductions are inevitable.

In addition to its operating budget, OJD will receive funding to continue implementation of the Electronic Court (eCourt) program, including funds for debt service and proceeds on new bonds for implementation itself.

A modest amount of funding may also become available for deferred maintenance projects on some of the 36 county courthouses. The Department of Administrative Services has been authorized to issue up to $11 million in lottery revenue bonds to raise funds, and it is hoped that these projects can be started and completed quickly.

In order to help address short-term budget shortfalls for the judicial department and Public Defense Services Commission, the legislature enacted HB 2287, which creates several new court fees and fee surcharges, as well as increasing many other existing fees. All of these take effect Oct. 1, 2009, and sunset on June 30, 2011. The bill came out of a work group consisting of legislators, the judicial department, members of the trial bar and collection agency representatives.

The filing fee bill also dedicates a small amount of revenue to the Oregon Law Commission and the Council on Court Procedures, and it also creates an Interim Committee on State Judicial System Revenues. This group will make recommendations on permanent court fees, fines and surcharges, and will recommend distribution of the revenue generated in the 2009-11 biennium.

Legislature Supports Legal Services
The end-of-session budget reconciliation bill (HB 5054) included a general fund biennial appropriation for legal services of $1 million. Half of this funding will be retained until July 1, 2010, but barring other budget rebalancing measures will be distributed at that time.

Additionally, the bar helped to sponsor SB 687, which requires that abandoned funds in lawyer trust accounts be reported to the Department of State Lands and forwarded to the bar to fund legal services programs. Currently the interest on such funds goes to legal services, but abandoned principal is not dedicated to any particular program.

Measure 57 Suspended
Few issues in the 2009 session grew to be more contentious than the debate over the implementation of Ballot Measure 57, the measure passed by voters in November 2008 that increases sentences for persons convicted of certain drug or repeat property crimes and encourages offenders to complete treatment programs. The legislature placed Measure 57 on the ballot as an alternative to a more costly measure presented by crime victim advocates. The measure went into effect in December 2008.

From the start of the session in January, the legislature was faced with steadily deteriorating revenue forecasts that forced the legislature to pare back agency budgets. Public safety agencies — including corrections, the state police and the Oregon Youth Authority (OYA) — faced significant cuts that could only be lessened if other savings could be identified. One idea was to “phase in” the implementation of Measure 57.

Ultimately, the legislature passed a bill (HB 3508-B), which maintains Measure 57 in effect until Feb. 15, 2010, and then suspends it until Jan. 1, 2012. The anticipated savings will fund expansion of state police patrols, continue other state police programs and maintain operation of two OYA facilities, which were otherwise slated to close.

This debate is likely to arise again in the February 2010 session, when hard numbers on the cost of Measure 57 for its first year of operation will be available.

Tax Measures
In order to minimize even deeper cuts and to balance the 2009-11 budget, the legislature passed two tax measures. HB 2649 creates a new higher marginal income tax bracket for Oregonians, and HB 3405 increases taxes on businesses, including the corporate minimum tax. Together, these two measures are expected to raise $733 million during the next biennium. Unlike some fee increases passed this session, which sunset in a few years, these tax increases are permanent — unless, of course, they are repealed by voters in a referendum.

Immediately after these measures were approved, business groups mobilized to refer the measures to a vote. Paperwork was filed with the Secretary of State in mid-July, and assuming that opponents of these measures can gather the necessary signatures, there will be a special election in January 2010. Repeal of these measures would result in difficult choices for the legislature, requiring immediate attention at the February 2010 session.

Conclusion
Again, these are only a few measures that will affect the practice of law and the justice system. Most changes go into effect on Jan. 1, 2010, but a substantial number of bills included emergency clauses, which make the bills effective upon the governor’s signature.

The Public Affairs Department is now preparing the 2009 edition of Legislation Highlights, a comprehensive survey of the legislative session, expected to be published in the next few months. Also, the bar will conduct the 2009 Legislation Highlights CLE seminar, a half-day program on legislative developments, on Nov. 6, 8:30 a.m. to 12:30 p.m., at the Oregon State Bar Center in Tigard.

You can find the full text and legislative history of all bills introduced and passed, staff summaries and other information about the legislature and the 2009 session at the legislative website, www.leg.state.or.us.

ABOUT THE AUTHOR
Steve Piucci of Portland represents Region 5 on the OSB Board of Governors and chairs the board’s Public Affairs Committee. 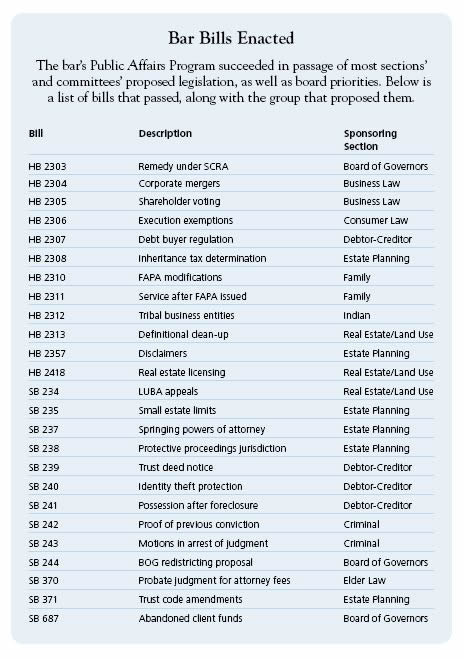