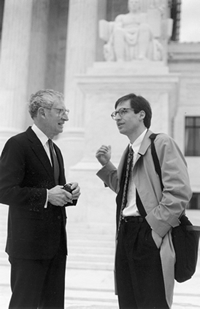 A framed color photo in Tom Christs Portland office shows him and his father standing on the steps of the U.S. Supreme Court. The photo speaks volumes about Christs respect for both his father and the work he does each day.

Toms father, Robert M. Christ, served for many years as a Multnomah County deputy district attorney. He later went into private practice and eventually served as a federal court clerk for 15 years before retiring.

"He inspired me to pursue a career in law because he did it so well and was so admired for it," says Tom Christ. "I still run into lawyers who remember him as a lawyer or clerk and say how much they admired him."

After graduating from the University of Oregon with an economics degree in 1979, Tom Christ drove across the country in a pickup while writing a novel. He says the plot involved "pretty much someone driving around the country, living out of the back of a pickup truck, and all of the supposedly profound thoughts he thought he was having. Those pages were burned long ago, everyone will be pleased to know."

He returned to Oregon a year later and began attending UOs law school. When he graduated in 1983, he joined Luvaas, Cobb, Richards & Fraser in Eugene where he had worked as a clerk during law school. He moved back to Portland in 1989 and went to work at Mitchell, Lang & Smith, becoming a partner a year later. He stayed with the firm until 2001, when he joined Cosgrave Vergeer Kester as a partner specializing in appeals and insurance law.

"I enjoy the academic aspects of appellate practice," he says. "It primarily involves reading the law and writing about it and arguing to judges what the law means, rather than arguing to jurors what the facts are."

Christ has acquired an expertise in constitutional law through his pro bono work. Throughout his career, he has provided legal services for the American Civil Liberties Union.

"Ive always been interested in civil rights and liberties, and in law school I did some research for the ACLUs Eugene chapter," Christ says. "Since then, Ive regularly volunteered my services to the ACLU or anyone else who needs counsel but cant afford it."

Of his many cases, one of the best known is Christs representation of 12-year-old James Acton and his parents against the Vernonia School District. Christ argued before the Supreme Court that the districts mandatory drug testing program for student athletes was unconstitutional, an occasion marked by the photo of Christ and his father on the courthouse steps.

"The Vernonia case probably affected me the most deeply. To be an appellate attorney arguing before the Supreme Court is a wonderful experience, like, I suppose, being a singer and performing at Carnegie Hall," he says. "At the same time, its a bittersweet memory because we lost the case in the end. It was disappointing not only for my client but, in my view, for all of us because the ruling diminished privacy protections under the Fourth Amendment."

In addition to his civil rights cases, Christ is perhaps best known for bringing lawsuits that overturned three voter-approved initiatives that improperly amended the state constitution: Measure 40 (1966), dealing with criminal law and procedure; Measure 62 (1998), involving election law; and Measure 7 (2000), involving property rights. In one of these cases, Armatta v. Kitzhaber, the Oregon Supreme Court announced the "separate votes" rule, limiting initiatives to one amendment per measure.

His passion for preserving constitutional rights goes hand-in-hand with his commitment to pro bono work, which includes serving without pay as a pro tem judge in Multnomah County Circuit Court for 14 years, hearing more than 1,000 motions.

"Its interesting to hear cases outside of my usual practice. It also helps me as an advocate to see other lawyers in court and learn from what they do right  and what they do wrong," he says.

He also learns much from his wife, attorney Mary Kyle McCurdy, who works at 1000 Friends of Oregon. The pair met at Mitchell, Lang & Smith and have two daughters, Molly, 13, and Emma, 8.

Despite the rigors of a full-time practice, several hours of pro bono work each month and membership on the Oregon Commission on Judicial Fitness and Disability, Christ finds time for soccer one night a week with a team hes played with for nearly 20 years. His fondness for Montana, where he goes fly fishing each year, and authors such as John Steinbeck, Wallace Stegner and Rick Bass reflect his appreciation for the regions panoramic scenery and open spaces. "I feel myself a westerner in much the way westerners are described in their novels and essays," Christ says.

Though he loves the outdoors, Christ admits one of his favorite places is the office. "In law school they talked about people who love the law. Im one of them still. I love what I do and enjoy coming to work each day."

ABOUT THE AUTHOR
Melody Finnemore is a Portland-area freelance writer and frequent contributor to the Bulletin.