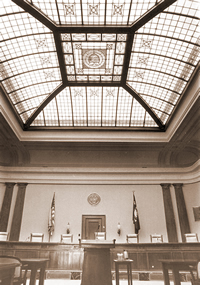 The walls in the third-floor courtroom of the Oregon Supreme Court building may not be able to talk, but the center drawer behind the bench speaks volumes.

The drawers wooden bottom is scrawled with the names or initials of nearly every Oregon Supreme Court justice to serve since the court first heard arguments on Feb. 14, 1914. Several staff members signed their names as well, creating an informal roster of those who operated and maintained the states oldest building at 1163 State St. in Salem. There is, however, a holdout who hasnt signed the drawer, which retained its role as a centerpiece during a major renovation during the 1980s.

Historic preservation was a key goal of the remodel, which was initiated by a leak in the rooms signature stained-glass dome. Interior designer Henry Meyer and his assistant, Shannon Ross, in 1981 began working with a committee of justices and court staff to renovate the courtroom. It turned out to be a longer project than most everyone expected.

"It took several years as the money was raised because the renovation was done with private donations," Ross recalls. "It was also very challenging to get the committee to agree on colors for the room. We were here week after week picking colors."

The stained-glass dome, a replica of the state seal installed in 1914, determined a color scheme of shades of gold and green. Gold fabric made mostly of silk was ordered from Italy to cover the walls. Each panel was done in a slightly different shade to provide contrast, and the material absorbs sound so it doesnt carry through the walls. The hand-painted carpet pattern was selected to compliment the pattern on the ceiling. Prison inmates in Oregons corrections system handcrafted the wood furniture filling the courtroom. A European company reinforced the domes glass leading, and a clear skylight was installed above it to protect it from the elements and prevent future leakage.

Lighting presented the biggest challenge, Ross says. "We wanted to find fixtures that matched the older style, but it was hard to find glass that fit with what we were trying to do."

Despite the challenges, Ross, who now works as a paralegal in the Trial Division of the states Department of Justice, says she felt a sense of awe while involved in the project. "The historical aspects were very interesting," she says. "It seems kind of ironic that I did interior design for 12 years, and then I went to work for the trial court and now I work in this building."

Several justices played an active role in the renovation, including Chief Justice Wallace P. Carson Jr. "I feel attached to this building not only because I work here, but also because my grandfather (John A. Carson) was a member of the state legislature and in 1911 introduced a bill to build a wing for the Oregon Supreme Court in the Capitol building," he says. "Fortunately, the bill was amended to include a new building for us, because in April of 1935, the Capitol building burned down and would have taken the Oregon Supreme Court with it, Im sure."

Designed by architect William C. Knighton, the supreme court buildings unique façade of white terra cotta and its ornate marble staircase are among the elements that give the historic structure such character, Carson adds.

"It was under-funded and under-designed, but it has served us well over the years," Carson says. "I just like old stuff, I always have. This is a beautiful building and it was well done  its built like a fortress."

Retired Justice Hans Linde, who served on the renovation committee, says he found he enjoyed the process even though it was time consuming. "I had been interested in architecture in the past and in how materials and colors go together," he says. "I wanted to do something that would go with the interior stained glass. People hadnt given it much thought before."

The project was important to him for both its historic value and its success in maintaining the courts autonomy. Former Attorney General Dave Frohnmayer in the 80s proposed a new justice building on the Capitol Mall, which would house the states supreme court and attorney generals office under the same roof.

"That would have meant sacrificing this old building, which would have had several drawbacks," Linde says, noting the State of Oregon Law Library no longer would have been convenient for attorneys to use, and the cost to duplicate it elsewhere would have been a waste of public funds. In addition, the consolidation may have had a negative influence upon the court, he says. "I think it impairs the independence of the courts if they rub shoulders too much with one major set of lawyers, and that would be the appellate lawyers and the state. Keeping some distance from them, to me, seemed institutionally important then," Linde says.

Renovation of the Oregon Supreme Court courtroom began a series of upgrades that have preserved Oregons legal heritage while modernizing facilities to keep up with growing space demands and technology advances. In 2002, the states law library celebrated the completion of a multi-year effort to restore and upgrade its facilities so it can better serve Oregons legal community.

"There were about two electrical outlets in the whole library. Its a 1914 building, and they didnt need outlets for computers back then," says Joe Stephens, law librarian since 1994.

Broken into phases that were completed as funding became available, the remodel not only added more computer-friendly amenities but also enhanced the librarys elegance. New carpeting and fresh paint made it more attractive. Improved lighting made it brighter and more energy efficient. And wider bookshelves better accommodate the bigger law books of today. At the same time, mahogany trim and furniture maintain its stately character.

"We did make a real effort to preserve it so it looks like a 1914 building," Stephens says.

The library soon will receive a climate-control system for its vault to better protect books that date back to before Oregons territorial status. Such treasures include a petition  signed by, among others, E.D. Shattuck, P.A. Markham and James K. Kelly  that set standards for practicing lawyers as Oregon obtained statehood.

"Its signed here by every early Oregon lawyer youve ever heard of. These people all have streets named after them now," Stephens says.

The finishing touch to the librarys renovation was a name change that recognized its importance as a resource for the community as a whole. "It used to be called the Oregon Supreme Court Library but we changed the name because only about 20 percent of its use is by the Judicial Department," Stephens says.

Next on the project list is a renovation of the Justice Building, located at 1162 Court St. N.E. behind the supreme court building. Constructed in 1929, the structure is due for some long-needed wiring upgrades and personnel relocations that will create more space for staff who remain in the building. The lobby will be left alone to retain its historic character, Ross says.

As for the holdout who hasnt signed the center drawer in the Oregon Supreme Court courtroom, it looks doubtful he will make his mark on that particular piece of history. Says Carson: "I went to Bush grade school here in Salem, and if you wrote on the furniture you went to the principals office, so I wont write on state property."

ABOUT THE AUTHOR
Melody Finnemore is a Portland-area freelance writer and frequent contributor to the Bulletin.