Profiles in the Law
Side by Side
By Cliff Collins 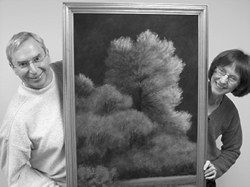 Salems Doug and Sheryl Dawson are in their third careers. They each were police officers, then lawyers, and now they are professional artists. Neither started painting until after the age of 50.

California-born Douglas B. Dawson served with the military police in Japan, then worked as a police officer in Alaska for three years, before graduating with honors from the University of Montana and completing law school at Willamette University.

A fifth-generation San Josean, he grew up in a family of gun owners and hunters, and wanted to pursue a career that kept him armed and preferably outdoors. He loved being in the M.P. and working with the Japanese police, and he calls his three years as a policeman in Alaska "my dream job." But through it, he "learned when a police officers work (on a case) is done, that wasnt the end of it." He came to admire prosecutors, and decided to pursue a law degree.

Doug Dawson first practiced solo, then became a deputy district attorney for Multnomah County and later for Marion County. Out of his 27 years practicing law, he spent just six in a one- or two-person practice. "I liked being a prosecutor," he says. "I was not a private practice-type of guy." He later served as D.A. for Polk County, then spent 14 years as an Oregon assistant attorney general in the District Attorney Assistance Division. In that position, he appeared in 32 of the states 36 counties. That travel inspired his love of rural Oregon and landscape motifs for his paintings, which he began doing while on the road.

Sheryl W. Dawson, born in Portland, spent seven years as a Salem police officer  five as a detective  then later was promoted to become the citys first female sergeant. When hired, she was one of four women among about 100 officers. "It was hard," she admits. But "I loved it most of the time, particularly the detective division." Then-deputy D.A. Doug, who met Sheryl at that time, testifies that she was head and shoulders above other officers in "follow-up work," a trait he considers unusual.

She grew up in a family of self-made people who had not gone to college, but she excelled in the classroom and was "always goal-oriented. I really wanted to go to college," she recalls. She completed her bachelors degree from Western Oregon State University over a period of years, while working with the Salem Police Department. Nevertheless, ever since high school in Woodburn, "becoming a lawyer had been on my life-goal list," she says.

After passing the bar, her second law job was with U.S. Bancorp, and she spent her remaining 12 years in practice working there as a corporate attorney, rising to vice president. Being competitive by nature and very focused on her career, she took to corporate law "like a duck to water," Doug says.

After meeting through their work, their paths crossed frequently professionally, and they were friends for several years before their relationship became romantic. When Doug ran for Polk County D.A., Sheryl was his campaign manager. At the same time, she was contemplating going to law school, and he had encouraged her to pursue that goal at his alma mater, Willamette. Two years later, they married.

Each has become an accomplished artist, producing about 100 paintings a year, works that are highly anticipated by those among whom theyve developed a following. Both are regular exhibitors at Lawrence Gallery in Portland, Sheridan and Salishan, and are extremely active in the Salem art community, exhibiting, teaching and giving seminars.

Doug Dawson first took up photography. It became an "obsession," one that filled his house with bulky equipment. Yet after he began sketching still lifes, then rendering them in acrylic and graphite, he realized a latent talent for painting. "Once he started doing art, he quickly became proficient at it," Sheryl observes. "I keep refining my understanding of two-dimensional art," he says. "Growing is an important part of being an artist."

In 1995, after his father died, and in 1997 as her position with U.S. Bancorp faced elimination after the corporation was bought out, the Dawsons reassessed their situations. At first, Sheryl thought she would seek a job in Salem, but after her interest in critiquing art developed into painting her own creations, the couple set up a home studio for two. Ever since, they have shared side-by-side easels and have concentrated primarily on painting Oregon landscapes and seascapes in acrylic and pastels. Sheryl has gained a reputation for her miniatures, Doug says.

The Dawsons view their away-from-canvas activities as of a piece with their art. They are environmentally oriented and outdoors often, hiking, camping and bird-watching.

"I paint landscapes to capture the divinity and beauty of nature," sums up Sheryl Dawson. "My primary goal is that the viewer will celebrate nature with me."

ABOUT THE AUTHOR
Cliff Collins is a Portland-area freelance writer.