Profiles in the Law
Gaining the Fires
By Cliff Collins 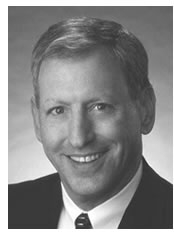 J. Michael (Mic) Alexander did not grow up idolizing Perry Mason. Instead, this son of a career military pilot wanted to be an aeronautical engineer, to fly and build aircraft.

That lasted until his second semester at Stanford University. A course there made him realize he wasnt bent that way, and he switched to liberal arts, gaining his degree in political science. He then spent four years in the Air Force as a missile launch officer.

When Alexander came out of the service, he had a wife and daughter and needed a career. He chose law  again, not because he had always dreamed of being an attorney, but because of practical concerns. "It gives you flexibility," he thought. "You can have your own business without a lot of capital. Its a way to support myself and family, and have independence"

He had been stationed most recently in California, and had discovered Oregon earlier, during a rowing match in Corvallis with his Stanford crew team. "I came up to Oregon, and saw it was a very nice place," says the Texas-born Alexander, who has gone by the nickname Mic (pronounced "Mick") since childhood. He took his law degree at Willamette University, then sought to remain in Salem to practice.

Alexander had clerked at Brown, Burt & Swanson, and joined the firm after passing the bar. The firm was known for its trial work, but "even when I came here, it was not be a trial lawyer, but to be in Salem," he says. In the beginning, he did all types of legal work, including handling all of the firms appeals and those referred by other firms. There would be no gradual breaking in for him: In his first month, he had a drunk driving trial.

Charles Burt of the firm was a "revered trial lawyer," the "most renowned plaintiffs lawyer in town," and "a fierce defender of the less-advantaged," says Alexander, who credits Burt with his own impetus to become involved with volunteer activities in the bar and community. He says Burt served as president of both the Oregon State Bar and the Oregon Trial Lawyers Association. "He believed camaraderie between lawyers was essential and fulfilling," and he often freely gave up his time to help young lawyers who sought him out with questions.

Getting involved didnt come naturally to Alexander, but he did it anyway. "Ive never been a group person; I was not in the Scouts or any other organizations. The Oregon Trial Lawyers Association exemplifies that were here to help those that cant help themselves, to be a counterpoint against corporate and government excesses. I believe in those things, and even though I came to law without fire, I have gotten the fire from this influence."

Alexander, whose practice emphasizes civil litigation and appeals, particularly personal injury and insurance coverage disputes, has participated in approximately 100 jury trials, and handled about 300 civil appeals. He is immediate past president of the Oregon Trial Lawyers Association. "I was not president of OTLA to say I was, but because I believe in what it stands for."

Because of his convictions, he has gained wide respect from all facets of the trial bar, both opposing defense as well as plaintiffs attorneys. Since 2002, Alexander has won three prestigious honors: He was elected to the American Trial Lawyers Association and the American Board of Trial Advocates  both invitation-only organizations  and this year he received the Owen M. Panner Professionalism Award. The latter is bestowed by the OSB Litigation Section for leadership, community and bar service, and for serving as a role model for younger lawyers.

"To get into both organizations is truly an honor," says Michael C. McClinton, a Salem defense attorney who has known Alexander  and often faced him in court  for 30 years. "Not only is he an excellent trial lawyer  thats understood; his integrity and professionalism just are outstanding. Hes the type of lawyer that makes you proud to be a lawyer. He is always the model of professionalism."

McClinton says Alexander is "one of the best I face," and Alexander is a straight-shooter who "never plays games as a lawyer. Hes not the type who pushes the envelope" by pulling surprises in court, and he rarely raises objections, McClinton says.

Alexander says of the Panner Award: "I was extremely flattered by that award. I was very flattered that my opponents would compliment (me with that). Professionalism is extremely important. I try to treat my clients and others right, to play by the rules. Thats all Ive really tried to do. Ive done no more than reciprocate for the collegiality and kindness lawyers have shown me over the years."

Like Burt, his role model, Alexander appreciates that "trial lawyers as a whole are cordial, respectful, competent, professional people."

ABOUT THE AUTHOR
Cliff Collins is a Portland-area freelance writer and frequent contributor to the Bulletin.