Profiles in the Law
Taking the Next Step
By Cliff Collins 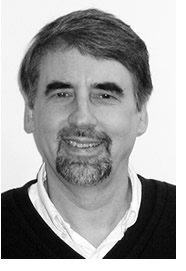 Giving up law for social services might seem like a big leap, but for Edward T. Monks, the switch represented a natural progression.

Monks spent 26 years as a Eugene attorney with a hyperactive social conscience, always willing and able to fuse his beliefs about improving the world to whatever the task at hand. In January 2003, after lengthy service on several Catholic boards, including the board of Catholic Community Services of Lane County for 17 years, he segued into the role of executive director of that nonprofit agency.

"From my board services, I knew I liked this work," he says. "I liked at least the potential for what you could do there. I was interested in trying my hand at it. They pay me a little bit of money to get up in the morning to think of ways to make the world a better place. Thats not bad. That is why I like it."

Monks grew up in a New York City suburb of New Jersey, probably dreaming of becoming a New York Knick rather than a lawyer or social activist. A heavily recruited 6-foot, 2-inch guard out of high school, Monks ended up bowing to his mothers and guidance counselors wishes by attending and playing for Columbia University.

Monks had been going to church on his own since about the age of 12, and "somehow out of that grew a preoccupation with right and wrong, good and evil, and the need to stand up for what you think is right," he says. Still, after finishing college, he was unsure of how he would translate his philosophy into action.

He took a job as an outside adjuster for a large insurer. "I liked it very much. I was dealing with a lot of lawyers." As he got promoted, he gained "great exposure to a tremendous cross-section of people, and discrimination cases, personal injury, workers comp, contract interpretation," he says. "Law just came to seem like a logical step after that."

Continuing to work 40 to 50 hours a week, Monks began attending law school at night, at Seton Hall University. In the summer before his last year in law school, he traveled around the West to find a future home base for practicing. He wanted to be near mountains and the ocean, in a state with environmental consciousness. Monks chose Eugene, and took and passed the bar exam a month after finishing law school. He drove to Eugene and, for about two and a half months, lived out of his 1969 Plymouth station wagon, while walking "into law offices unannounced," looking for work.

Renowned criminal defense lawyer Ken Morrow, who shared similarities in background, hit if off with the young job-seeker and hired him. For his first 15 years of practice, Monks handled many domestic relations cases, but spent the latter part of his law career as a plaintiffs attorney doing employment law, personal injury and small-business matters.

Concurrently, he wrote and spoke on liberal causes, including a lengthy local opinion piece on the Reagan administrations killing of the Fairness Doctrine, which Monks ties to the rise in right-wing radio hosts. Before 1987, broadcasters were required by law to air contrasting points of view regarding public interest issues. After the Federal Communications Commission repealed the rule, and President Reagan vetoed a bill that restored it, "the Fairness Doctrine came to an end, both as concept and a rule," Monks wrote. His article was quoted by national columnists and authors, and Monks ironically found himself a guest on Lars Larsens radio show. Monks now hosts his own local cable TV talk show, which is comfortably to the left of Larsens.

Bill Sharp, who practiced law with Monks since 1978, says Monks is a highly skilled attorney, but thinks Monks new job is an ideal position for him. "He believes deeply in a number of causes, most of which are aimed at helping people who are less fortunate and protecting the environment," says Sharp.

Monks supervises 30 employees in an agency that focuses on providing the necessities for the poor and vulnerable, with the goal of helping individuals and families gain self-sufficiency. The agency, which is the major food-box distributor in the county, also operates a home for drug-affected mothers of young children and a young parents program. The agency provides lodging for homeless families, energy assistance, bus vouchers and financial aid for certain medical prescriptions. Assistance is customized for each family and may include guidance in budgeting, nutrition and general household management, as well as career development and job attainment.

Monks is busy moving Catholic Community Services into a different building. He credits his legal background as invaluable in nearly every aspect of his executive directors job. "I handled the purchase of this building; I did all the legal aspects. Ive done leases, a number of personnel issues, questions of client-social worker confidentiality, interactions with the police. It is a tremendous benefit."

ABOUT THE AUTHOR
Cliff Collins is a Portland-area freelance writer.