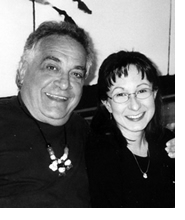 Access to justice for the poor has lost one of its most effective advocates. Rich Cecchetti, executive director of the Oregon Law Foundation, died from cancer on Oct. 15, 2004. The devoted family man is survived by his wife, Denise, and their nine-year-old son, Tanner, four children from a prior marriage, four grandchildren, three brothers and three sisters and several nieces and nephews.

Rich was born on Nov. 30, 1939, in Arnold, Pa., a suburb of Pittsburgh. After completing school there, he graduated from Indiana State College of Pennsylvania in 1962 with a B.S. degree in business administration and finance. He devoted his professional life to helping others. He worked for the Guild for the Blind in Pennsylvania and for public housing authorities in Pittsburgh and Denver.

From 1987 to 1989, he was the executive director of the Public Housing Authority in Pontiac, Michigan. In 1989, he joined the staff of the Oregon State Bar as an administrator of the OLF. Over the years, Rich came to personify the foundation to its stakeholders and partners.

Rich ably carried out the OLFs mission to support equal access to justice for the poor, to educate the public about the law and to promote diversity within the legal profession. The OLF achieves its mission by grants to providers of free and low-cost legal services to the poor and to organizations such as the Classroom Law Project and the Affirmative Action Program of the bar. Since Rich joined the OLF, the foundation has given out more than $14 million in grants.

Richs hallmarks were cheerfulness, patience, inclusiveness and consensus-building. Because most of the money the OLF gives away is derived from interest earned by funds held in lawyers trust accounts, the most important task of the foundations executive director is to persuade financial institutions to maintain favorable interest rates on such IOLTA accounts. Rich was a master of persuasion. Over the years, his uncanny ability to see win-win situations for people with apparently conflicting interests enabled him to forge enduring partnerships between foundation supporters, its grantees and the banks that provide most of the OLFs revenues. As a result, the funding available for distribution to grantees increased and stabilized, and more of the most vulnerable people in Oregon received free or low cost legal services. Even during the recent recession, Rich successfully persuaded three national banks to maintain above-market interest rates on their IOLTA accounts in Oregon and a fourth to increase its rates. As a result, the average rate on all IOLTA accounts in Oregon has been the highest or second highest in the country since 2001, and the OLF, unlike its counterparts in other states, has been able to maintain grants near 2001 levels.

Rich received national acclaim for his collaborative approach. This past February, he participated by invitation in a banking workshop sponsored by the American Bar Associations Commission on IOLTA and the National Association of IOLTA Programs. He discussed what he called the "Oregon approach" to working with financial institutions. What he described, with great passion, was the strategy of inclusiveness that has infused all of his efforts for the foundation over the years. As he spoke, Richs energy lit up the room. His materials on the Oregon approach were featured six months later in a follow-up ABA workshop on how to collaborate effectively with institutions whose interests appear to be contrary to your own. People in attendance at the two workshops marveled at Richs approach and at the OLFs good fortune in having him as director during the past decade. His counterpart in New Jerseys IOLTA foundation recently said, "Rich was always so curious about IOLTA and life in general. It was hard to stay even with his thoughts  he was always out ahead."

Rich worked his magic by kindness and indirection, not assertiveness and confrontation. In recalling their first encounter with Rich, people usually remember him reaching out to include them in a project he knew they were interested in or offering to assist them in one of their endeavors. He was a mentor to all who sought his advice on managing an IOLTA foundation over the years. He had an uncanny ability to befriend almost everyone whose life he touched  and he touched the lives of many.

Rich enjoyed golf but delighted in giving dinner parties with his wife and other members of his gourmet cooking group. Nothing pleased him more than seeing the look on your face as he put one of his fine Italian dishes on the table, especially alongside a sparkling glass of good Chianti or Pinot Grigio  wines he knew well and loved.

Few people knew Rich was also a songwriter. When the moment was right, hed take up his guitar and sing for hours. He was happiest when he cajoled you into singing along with him, especially if you knew the words to one of his favorite songs from the 60s or 70s. During his final hospitalization, Rich told me that he was devastated at the prospect of leaving his wife and son, but to the rest of us he would be singing, "So long, its been good to know you . . ." Those who were privileged to work with him over the years sing in reply: So long, Rich. Its been good to know you, too.

ABOUT THE AUTHOR
John Paul (Toby) Graff is president of the Oregon Law Foundation.