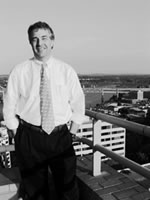 Doug MacCourt only has to look out of his office window to know he has made a difference.

His legal work in brownfields redevelopment has helped transform some of the citys worst eyesores into showcase projects, such as North Marine Drive in the Rivergate Industrial District and the revitalization emerging along Northeast Martin Luther King Jr. Blvd. and South Waterfront.

'As a longtime resident of Northeast Portland, its been great to see this happen,' MacCourt said, referring to success stories along MLK and the brownfields redevelopment in the Albina Industrial District. 'This is tremendous progress from where Northeast Portland was a few years ago. It still has a long way to go, but the makings are there.'

He has been part of Portlands effort to redevelop contaminated properties since the 1980s. When the Clinton administration launched its Brownfield Economic Redevelopment Initiative in the early 1990s, MacCourt helped position the Rose City as a model for environmental restoration and economic revitalization.

As brownfields coordinator for the City of Portland from 1991 to 1999, MacCourt developed the Portland Brownfield Initiative and the Portland Liveable Community Showcase. The programs targeted brownfields city-wide, focusing on the downtown waterfront and portions of North and Northeast Portland for mixed-use development, the creation of housing and jobs, and multi-modal transportation options. The highly visible results of these efforts have added to Portlands reputation as a national leader in successful redevelopment strategies.

'One of the reasons I loved working for the city and am still involved in this issue is because its extremely rewarding to see projects like Belmont Dairy and the Sellwood Lofts that were built on abandoned or underused sites and are now premier properties. It proves we can do it and the problems arent insurmountable,' he said.

Now a partner at Ater Wynne, MacCourt continues to help contaminated properties find new life through cleanup and redevelopment. He also educates others about the quagmire of legal issues involved in brownfields redevelopment. MacCourt helped organize a national brownfield conference to be held in Portland Oct. 27-29 at the Oregon Convention Center. Mobile workshops to areas such as OMSI and the River District will offer participants a chance to see the positive impacts of the federal brownfields initiative.

'I think the initiative has been very successful on certain levels. Its unquestionable that it created a national dialogue between industry, business, all levels of government and legislative bodies about how to look at the existing regulatory framework and ask, Is this helping or hurting? and what to do about it,' he said. 'We have a long way to go to make sure were spending money in the most effective way and addressing the most serious issues.'

MacCourt speaks nationally and counsels clients on the 2002 brownfield amendments to the federal Superfund law (CERCLA), amendments which have somewhat complicated the process for cleaning up contaminated properties.

'I think the real challenge for practitioners like myself and others in the legal community will be to ask whether it makes sense to take advantage of protection under the federal law or whether our state laws and protections are strong enough,' he said.

It is through policy questions such as these that real changes get made to protect the environment, a realization that hit MacCourt early in life. Coming of age in Humboldt County, Calif., he learned to love nature. His summers working on logging and U.S. Forest Service crews during high school and college taught him about the need to conserve natural resources while making a living off of them.

'I wasnt someone who knew as a kid they wanted to be a lawyer, but I did discover a love for the environment pretty early on,' MacCourt said.

He earned a bachelors degree in natural resources from Humboldt State University in 1983 and did two years of graduate work in watershed development. Though his focus was more on the scientific aspect of natural resource preservation, MacCourts uncle encouraged him to pursue a career where he could impact environmental policy. He earned his law degree and a certificate in natural resources and environmental law from the University of Oregon in 1988 and served as a law clerk at Bonneville Power Administration, where his duties included writing contracts to restore tribal fisheries. He worked at Portlands Martin Bischoff Templeton Langslet & Hoffman for three years before joining the citys transportation department.

A 'brownfield tour' through Portland with MacCourt illustrated not only how many successful redevelopment projects he has been involved in, but also his patience with the number of years such projects typically take and his dedication to strengthening the environmental protection policies that drew him to the law in the first place.

'If youre lucky enough to work somewhere this beautiful, how can you not be passionate about it?'

For more information about the 2003 Brownfields Conference in Portland, go online to www.brownfields2003.org.

ABOUT THE AUTHOR
Melody Finnemore is a Portland-area free-lance writer.