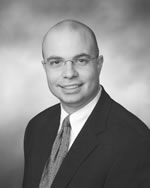 Benjamin G. Wolff doesnt believe in wasting time. He was supporting himself at the tender age of 14, and founded a business by 17. At 28, he became the youngest lawyer ever to make partner at Davis Wright Tremaine, after just over three years.

Now, at 34, he has garnered another distinction: In January, The American Lawyer magazine named Wolff among its '45 Under 45: The Rising Stars of the Private Bar.'

Wolff is the magazines only selection from the Northwest and one of only a handful from the West Coast. In addition, last August he was chosen in The Business Journal of Portlands 'Forty Under 40' awards.

Davis Wright Tremaine, where Wolff worked as a law clerk and has practiced since graduating from law school in 1994, recognized his potential and never let him go. 'We saw it very early and did all we could to encourage him. We noticed. Thats the best thing we did,' said Michael H. Schmeer, partner in charge of the firms Portland office. 'He is the most extraordinary lawyer I have seen and the most extraordinary most of us at Davis Wright Tremaine have seen.'

Wolff was born in Santa Barbara, Calif., and grew up on the central coast of California. His parents separated when he was 13 and divorced a year later. His father was a lawyer, a factor that was 'somewhat influential' in Bens career choice, he allows. Even more so was Bens own experience in business: He worked for an electrical contractor, started his own spa, fireplace and wood-stove store, and  while attending college full time  served as director of marketing for an agribusiness company, working around 40 hours a week.

'I knew I enjoyed business and helping people grow businesses, and doing transactions,' says Wolff, who finished with a bachelors degree in agricultural business from California Polytechnic State University. He also knew that, with the recession of the early 90s, it was not a propitious time to become an investment banker. Instead, he chose law school, the Northwestern School of Law at Lewis & Clark College.

'Going to law school, you develop a skill set thats valuable to a whole variety of business interests,' says Wolff. But it was his drive as much as his training that has given him such early success. His father was driven, he adds, so his own drive in part may be genetic. But his home situation was equally influential: 'I realized I was pretty much on my own at 14.' He became estranged from his father, lived off and on with his mother, and when he did live with her, paid her rent. 'It was an awful home environment, and that was part of it.'

He found the firm a good fit and 'entrepreneurial-oriented.' There, he was immediately given 'the opportunity for meaningful transactions early on,' rather than having to 'sit in a library and do research for three years.' One of the first clients he brought aboard was The Oregon Wine Growers Association. Using his 'ag' background, he recognized that Oregons vineyard industry was taking off, but hadnt gotten legal representation. He had seen lawyers thrive representing the Napa Valley, so he took the cue. Now he represents a number of West Coast wineries and vineyards.

What he enjoys best about his practice of corporate law, which emphasizes mergers and acquisitions, venture finance and related matters, is 'making deals happen. I like helping clients put something together. Being an integral part of the team with a client is a very rewarding experience. Being able to apply a lot of creativity every day is intellectually challenging.'

The downside of practice is not the hard work, he says. 'Having to keep track of billable hours, and charge clients for my time when I enjoy it, is the part I like least. Having to keep track if I talked to a client for three-tenths of an hour ... that is what is most discouraging about the job.'

Relationships are the key to a successful practice, Wolff believes. The firm gives him the freedom to be selective, he says, to choose mostly clients with whom he can have a team relationship.

Wolff, who married Davis Wright partner Julie A. Weston last year and has two children, splits his practice between the firms Portland and Seattle offices. The couple of days a week he is in Seattle he lives on a power boat, while representing such clients as Starbucks Coffee Co. and Craig McCaws Eagle River Investments.

ABOUT THE AUTHOR
Cliff Collins is a Portland-area freelance writer and frequent contributor to the Bulletin.