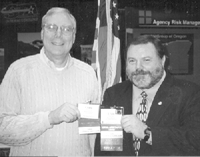 The odds are not high that two natives of Waterloo, Iowa, named Craig A. Smith would both be Oregon lawyers serving in leadership positions on their local and state school boards. Meet Craig A. Smith, Salem, and Craig A. Smith, Eugene. Despite similar interests in business and tax law, no one would mistake them for formerly conjoined twins, notes Craig Smith of Salem: 'Hes a foot taller than I am. Im about a foot wider than he is.'

Born in the same hospital, Salems Smith is two years younger. They first met several years ago at a school board function and noticed one anothers name tags.

'Fortunately, our wives have different names,' points out Smith of Salem, who adds that the chances of both Craig A. Smiths serving on their respective local school boards are 'rare'; there are only about 1,000 school board members in Oregon altogether. Periodically, the two attorneys receive one anothers mail. 'Every couple years or so Ill get a packet that should be for him,' Salems Smith says. 'We just harass whoever sent it,' and return it.

Once Eugenes Smith arrived at a Portland hotel for a state school board meeting and found his reservation had been canceled. It seems that Salems Smith had arrived earlier, and after discovering that the desk had reserved two rooms for Craig A. Smith, dropped the second one, attributing it to his own offices error. After scrambling, the hotel was able to find the later-arriving, befuddled Eugene Smith a room at the last minute. 'So the biggest inconvenience was when he almost spent the night on the street in Portland,' quips Salems Smith.

However, the Eugene Smith got back at the Salem Smith, or could have had he chosen to: While at a school board function, a vendor sent a fruit basket to his room  intended for Salems Smith, who was president of the Oregon School Board Association. That was one time Eugenes Smith admits he was tempted to remain quiet about the name mix-up.

Salems Craig Alan Smiths family left Waterloo soon after his birth, and he was raised on a cattle ranch near Nampa, Idaho. After college he became an officer in the Army. He then spent most of his 20s peering through a gas mask as a San Jose police officer. He had planned to be a cop just long enough to save money for law school, but liked the work and stayed for nine years. The work included campus protests, Angela Davis (who once was housed in the city jail), the Weathermen and Patty Hearst. When President Nixon was in town, Smith and his colleagues 'were barely controlling the crowd' when the president 'jumped on the hood' of his limousine and raised his arms in 'victory' signs, which 'inflamed the crowd,' Smith remembers.

While working as a cop, Smith met his wife, who first came to his attention after 'she ran a stop sign and nearly hit the police car, then she ran another stop sign.' Somehow, she got off scot-free, though Smith, who married her three years afterward, jokes, 'Shes still paying for it.' While still in his 20s, Smith ran for the local school board and won, because the ballots allowed candidates to list their occupation alongside their name.

Smith next opted for a more peaceable setting: Salem, where he simultaneously earned an MBA and a law degree at Willamette University. He became managing partner of what is now the largest CPA firm in Salem. For the past 15 years, he has worked at Chemeketa Community College, where he is vice president of finance and administration. 'With all the things Ive done, the law training and degree have really been helpful,' he says.

Like his namesake, Craig Alvin Smith of Eugene didnt tarry in Waterloo. He grew up in Minneapolis, becoming the first person in his immediate family to go to college, earning an undergraduate degree at the University of Minnesota and finishing law school at the University of Michigan. Between his second and third year of law school, he was drafted into the Army, which 'wanted me to carry a backpack radio.' Instead, he ended up as a JAG enlisted man at Fort Knox, Ky. He had considered getting an MBA degree, but thought 'ultimately the law degree would give me more flexibility.'

After clerking under two justices at the Oregon Supreme Court, Smith joined the business law firm of what is now Hershner, Hunter, Andrews, Neill, & Smith in Eugene. He has served stints on the executive committees of two OSB sections (Taxation and Business Law) and has been listed in The Best Lawyers in America since 1991 under the categories health care law and employee benefits law. An interest in education is in his genes, he thinks. Many family members are involved in the field (his wife was once a teacher, one daughter is a teacher and another daughter is an educational social worker), and he now is vice president of the Oregon School Board Association.

Smith of Eugene recalls that during the Salem Smiths tenure as president of the association, he (the Eugene Smith) sometimes was referred to as 'the other Craig Smith.' Should he advance to president of the group, the roles may be reversed.

ABOUT THE AUTHOR
Cliff Collins is a frequent contributor to the OSB Bulletin.