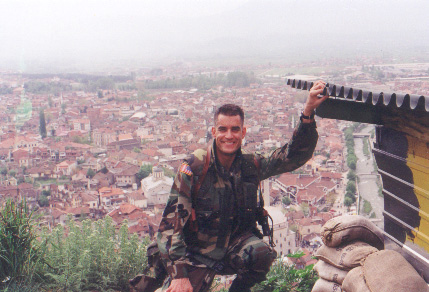 Like any of life's significant experiences it takes time for the clarity of some events to come into focus. Being sent to the Balkans has been such an experience. Last winter I deployed to Kosovo as part of a five-attorney team from the U.S. Army's First Armored Division.

Over the course of a month, soldiers and marines continually flew from Ramstein Air Force Base for Kosovo on the wings of C-130s. On Feb. 3, 2001 I landed in Skopje, Macedonia and then took a bus through rigorous mountain passes to Camp Bondsteel, Kosovo. It is the largest base in the Balkans, home to thousands of U.S. servicemen and women. It also has a large international contingent, with soldiers from Italy, Poland and Russia. Most of the other 23 multi-national forces comprising Kosovo Force (KFOR) often visited Bondsteel on Sunday to shop. We are blessed with a heavily stocked post exchange and a cappuccino bar that is the envy of our international colleagues.

HEROICS OF A SERBIAN PRIEST
My job as the U.S. Army prosecutor for Kosovo and Macedonia was rewarding, however, my professional experiences working with the United Nations prosecutors proved the most memorable. One case in particular will never be forgotten.

It was the day four armed soldiers and I escorted an Orthodox Serbian priest named 'Papa' into a courtroom to testify against a teenage boy who, three months earlier, drove a car while his friend unloaded five shotgun blasts into the car driven by this priest. Papa and his two Serbian passengers survived the attack. Later these passengers fled to Serbia, leaving behind their murdered relatives and fire bombed residences, all of which was meant to send a signal (which they heard loud and clear) not to testify against this teenager. Papa was the only witness left.

The U.S. Army, on request by a U.N. prosecutor, escorted Papa to the courthouse in Gjilan, Kosovo. When he was rushed into the prosecutor's office he sat stoically in his chair, refusing to testify. His wife and children had received death threats, and the day before his best friend, while riding a bike in Vitina, was shot off it. Under the U.N. tribunal's rules, without Papa's testimony, the teenager and his accomplice would escape conviction. So we all waited impatiently and pleaded for his cooperation. The longer we waited in the prosecutor's office the more vulnerable we became to an attack. His enemies knew he had arrived. I peaked out the window, and pulled the curtains completely shut. Snipers in this country were not beyond reason.

A Kosovo police officer, a large Albanian man, abruptly stopped our entourage outside the courtroom door. He gruffly ordered Papa to the metal detector located upstairs. Knowing this supposed officer's nationality, I balked at the suggestion and demanded that he be checked right then and there. The officer, miffed by my command, begrudgingly conducted the frisk of the priest, although with unnecessary roughness.

After this harassment Papa entered the courtroom. The courtroom spectators, other than a handful of U.N. workers, were all Albanian men, most of whom wore black leather jackets. Papa walked forward to the witness bench and stood before the three judge panel. The accused sat behind him. Prompted by an open-ended question by one of the two U.N. judges, Papa began to speak. I was overwhelmed by the emotions that he was surely feeling at that time, and my throat tightened. I looked over at the U.N. prosecutor: She had tears in her eyes.

As is the practice before U.N. tribunals, the accused was allowed to ask the accuser questions. Taking this opportunity the teenager stood and looking at the back of the Papa's head, said, 'You are a religious man, so you tell me Papa, do you swear on the heads of your wife and children that you are telling the truth today?' This was no idle threat. After a moment the priest, looking at the ground, shook his head and said, 'Son, I feel sorry for you and for what you have done.' After a few more moments his testimony ended. Ultimately the teenager was acquitted but his accomplice, who was being tried in absentia, was convicted of attempted murder. Despite the mixed verdict the prosecutor was ecstatic. The panel's decision resulted in the first conviction in Kosovo of an Albanian for committing a violent act against a Serbian in more than two years.

CHILDREN OF KOSOVO
If you were to travel through Kosovo in a U.S. military vehicle with the white lettering 'KFOR' painted on its doors, you would be the most popular person on the road. As you passed, children would raise their hands for a high-five with a grin from ear to ear. Albanians consider American soldiers to be the great liberators because we, more than any other force, compelled the Serbian (VJ) Army out of Kosovo. So, it's rather quite simple: Without our intervention death would have surely come to many of these roadside children; I have seen enough video footage and pictures documenting the plight of children to know this for a fact. So whenever we left the heavily armed gates of Camp Bondsteel, we always knew why we were there; for me, like many, it came down to the children.

MY VISIT TO THE RUSSIAN SECTOR
Last May, in a show of friendship, soldiers from Russia and the U.S. met for lunch in a deserted mine pit in Kamenovo. The rocky quarry also doubled as a track for the latest Russian and American military vehicles. I hopped into an M-1A2 tank and quickly learned why it is considered the 'Cadillac' of the tracked vehicles. It was smooth, fast and covered ground it had no business in, including, in my case, down and through a 12-foot mud ditch. Moments before I was asked to drive, I smartly declined.

The Russians shared my enthusiasm with the tank. U.S. soldiers also rode around and even drove a few Russian armored vehicles. On one occasion, a U.S. soldier, uncomfortable with the Russian gearshifts, ran over a stop sign, to the comical amusement of about 30 locals who had come out to watch the festivities in much the same way that we attend Trail Blazer games. Kosovars do not have much in entertainment.

THE RIGHT TO PRACTICE LAW
The judicial system is at the forefront of change. However, like so many Balkan challenges, the bias of the ethnic agenda remains entrenched. Can you imagine, for example, being told by our state bar that you are no longer authorized to practice law in Oregon based on your particular ethnicity? Well, if you were Albanian living in Kosovo just a few years ago, that would have been your fate. In response, Albanians have fought back, perhaps a bit to zealously on occasion, in reclaiming the judicial system, by threatening Serb lawyers and judges out of the country and stacking the deck with Albanians, who not surprisingly, have not been shall we say, sympathetic to Serbians accused of crimes. In light of this systemic problem, the U.N. deployed a host of international prosecutors and judges to augment their fight to make justice blind.

THE PROSPECT OF PEACE
If you were to visit Kosovo your experiences would no doubt, be equally sobering. But, again, the countless children of Kosovo are thankful everyday that this great United States of America, from so far away, has come to protect them and their families from danger. We have given them a life with a great deal less fear. We should all be proud of that alone. If the U.N. is successful in bringing lasting peace and stability to Kosovo, this precedent will be the source of hope for many future generations to come. Future leaders, perhaps not yet born, can inspire others with prospects of peace with a simple phrase of 'we did it in Kosovo, why can't we bring peace there?' That legacy, no matter how difficult the challenge, is worth U.S. soldiers being peacekeepers, young men and women whom I am very proud to serve with as an officer in the United States Army's Judge Advocate General's Corps.

ABOUT THE AUTHOR
The author, a captain in the U.S. Army, serves as a federal prosecutor in the 1st Armored Division in Wiesbaden, Germany.