Paddling Together
By Linda Campillo 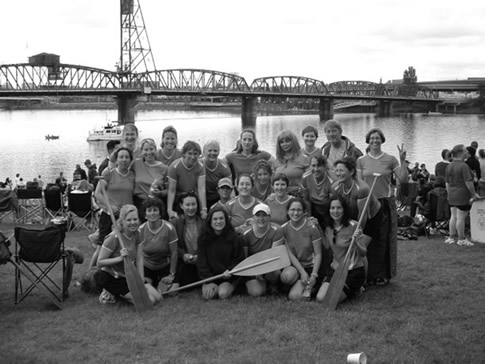 Sometimes they're up against each other in court, but in their off hours, they work as a team. The Oregon Women Lawyers DragonFlies dragon boat team is a winning combination of lawyers, judges, referees and women in law-related professions. The team recently placed fourth in the Women's Division 1 at the 14th annual Rose Festival Dragon Boat Races. They also hold the first place title for the DragonSports USA Vancouver Lake Fall Regatta in Washington, a title they will defend this fall as part of their year-round competitions.

'There's a number of attorneys on the boat who do family law and have faced each other in court,' says Cecil Reniche-Smith, who is with Zimmer & Bunch. 'I've gone against  at least one of them  in a very difficult case.' The two attorneys however decided early in the case that their work was not going to come between them and ruin their recreational partnership. 'I think it actually helped us - because we knew each other so well - to reach a resolution that was good for everyone.'

In the past, there have been judges on the team whom some attorneys have had to appear in front of, but Reniche-Smith explains, the judges usually disclose how they know the attorney and all goes well. Currently, referee Linda Hughes paddles on the team, and several attorneys who do juvenile law have appeared in front of her quite a bit. 'It's interesting to paddle with a judge and then appear before her the next day,'' says Reniche-Smith.

'It's always so interesting when you get in the boat  and see how we look as paddlers when you're used to seeing each other in suits in court,' adds Jennifer Kampsula, who is a general litigation attorney with Kell, Alterman & Runstein. Kampsula is co-captain this year with Pam Haan, a Legal Aid attorney. The lawyers also now get referrals from each other, so many of their firms agree to sponsor the races. Other team members who participated in the Rose Festival Dragon Boat Races include: Abigail Adams, Beth Allen, Laura Chartoff, Lisa Chiang, Nancy Cooper, Barbara Creel, Greta Gibbs, Maiya Hall, Sue-Del McCulloch, Shoshanah Oppenheim, Diane Rea, Robyn Ridler, Samantha Smith, Ruth Spetter, Robyn Stein, Diana Stuart and Heide Cole, who is not in the legal field and whose husband, Richard Cole, is the coach. The Rose Festival tiller was Karen Adams, Reniche-Smith was the caller and Leah Daniels the flag catcher.

The team traces is origins to 1995, when students and professors from the Northwestern School of Law at Lewis & Clark together competed as the Scales of Justice. The next year, the Scales became a co-ed team, sponsored by the law school. But by the third year it went back to being all women and was sponsored by Oregon Women Lawyers. At this time, Richard Cole, a known dragon boat coach, was recruited to help.

'We all fell in love with each other,' says Nancy Cooper, an attorney with Bullivant Houser Bailey. Cole has been the DragonFlies coach ever since, helping the team in its many races. At least six women who have paddled with the DragonFlies started with the original Scales of Justice team, including Cooper, Christine Meadows, Jen Peet, Judity Woodruff, Deanna Wray and Shaun Wardinsky. Other team members for the 2002 races include Cecily Becker, Karen Berkowitz, Julie Carter and Maggie Smith.

Since the team competes all year, not all paddlers participate in every race. The various races require between 22 and 25 members with the Rose Festival dragon boats being the largest. 'Our team roster always changes,' Cooper explains. DragonFlies range in age from early 20s to mid 50s.

'It's also a pretty big time commitment,' Kampsula adds. The team begins practices in February; from April to Rose Festival, they practice three times a week. They race through September, but this year the team may go longer because everyone's excited about how well they are doing. Although they didn't come in first at the Rose Festival, they broke the team's time record and beat their rival, SSPMS, in the quarterfinals. It was an exciting photo finish, Kampsula says, 'We actually had taken the boat back to the dock and everyone was out of the boat when they announced who won. I'm sure you could hear a lot of noise coming from us.'

Although SSPMS went on to take first place, the DragonFlies finished just 5.21 seconds behind. The team went on to compete in the Alcan Festival in Vancouver, B.C. in June 22. Then they will defend their first-place title at the DragonSports USA Vancouver Lake Summer Regatta in Vancouver, Wash., July 20. 'There are some highly competitive teams here in Portland that go on to compete in China,' Kampsula says. 'We keep dreaming.' The team is always prospecting for new members and sponsors, so anyone interested may call Kampsula at (503) 222-3531 or Cooper at (503) 499-4424.

Linda Campillo is a Portland-area free-lance writer and frequent contributor to the Bulletin.