A Wilsonville attorney buys a bowling alley in Joseph, Ore., as a business venture because her daughter - also an attorney - lives and works in the area and wants her parents to move there.

The daughter manages the bowling alley, and she is a partner in a law firm as well. Beer and food vendors are known to drop by her law office to pick up checks and get invoices signed, and legal clients have stopped by the bowling alley to 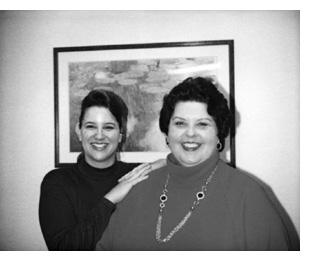 pick up documents. She routinely switches hats during the day from lawyer to bowling alley manager, shifting from one office to the other as the situation arises. Of course, there are funny events along the way. Like disputes over who has to clean the urinals in the men's restroom at the bowling alley.

Sound like a television sitcom? Well, it could be a spin-off of the show called 'Ed,' in which a lawyer buys a bowling alley to move back to his hometown and runs his office from the alley. But it's not, it's real life. The mother/daughter lawyers of Susan C. Moffet, an adoption attorney in Wilsonville, and Victoria K. Moffet, a criminal defense and juvenile law lawyer in Enterprise have both heard references to the television show from 'everyone' who hears the story. 'Everybody laughs at us and calls us 'Edwina',' Susan Moffet says. 'It's a cute show, but that's not the reason we bought it.'

'It really was my daughter and her fiancee's idea,' Susan explains. Victoria moved from Portland to Joseph about four years ago to practice law in a smaller community. She has bowled in a women's league at Wallowa Valley Lanes for the past three years. Her fiancee also bowls, and last January they heard that the bowling center was going up for sale. It seemed like a good business opportunity.

Meanwhile, Victoria had been talking to her mother and father about relocating to the Wallowas because of the laid-back lifestyle. 'I've been looking for a business outside of law that I could run when I decided I want to cut down my practice,' Susan said. 'Also, if I want to move over there I need a way to earn money because I probably couldn't do as many adoptions there.'

Victoria and her fiancee did the footwork of driving around the state and talking to people who own bowling centers to find out the pros and cons. Once the pros seemed to outweigh the cons, Susan bought the bowling alley with the agreement that Victoria would manage it. The 1917 building once housed a combine repair business and still has 'Garage' inscribed on its brick exterior. The Moffets completely renovated and remodeled the interior to bring it up to code and modernize it a bit. The business has been running since early November with three part-time employees, Victoria and her fiancee. Susan comes over periodically and works a long weekend. The bowling alley includes a snack bar which also sells beer and wine and a small arcade.

The establishment is currently called Wallowa Valley Lanes, but the Moffets would like to tie into the garage theme from the historic building. They also plan to investigate getting the building listed on the National Register of Historic Places. 'I don't have any familial ties to this community,' Victoria says, having been raised in the Portland area. 'So to buy a business with a history has really been fun.' People in town know that when Victoria is not at her law office, they can find her at the bowling center where she spends all her extra hours. Luckily, her law schedule is fairly flexible, because about half of her time is spent at the bowling center right at this point.

In addition to court-appointed criminal defense and juvenile law, Victoria, 33, also handles family law and bankruptcy cases. Since Wallowa County ordinarily has court only on Wednesdays, she can be at the bowling alley at least part of the other days. She also handles cases in Union County, where the court often allows short duration business and hearings to be conducted by telephone, and she can do this from the bowling alley if necessary. Although there's a lot of overlap between her two offices, Victoria says, she has no plans to move her law office into the bowling alley - yet. She is a partner with Kirby, Johnson & Moffet in Enterprise and serves as president of the Wallowa County Bar Association.

'Right now, we have to see how things go,' says Susan, 56, about making the move to Joseph. 'I want to let this bowling alley take off before I do anything. I've got a ways to go.' Susan has been practicing adoption law exclusively since 1987 and is a partner in the law firm of Dexter and Moffet in Wilsonville. She lives in Tualatin with her husband of 34 years, Franklin. Currently, she is secretary of the standing committee on adoption for the OSB Family and Juvenile Law Section.

Both the Moffets received their law degrees from Northwestern School of Law at Lewis & Clark College (classes of '86 and '96). They have a lot in common besides the bowling alley. Stay tuned to see if it's going strong the next fall season.