Chris Hermann, a partner at Stoel Rives, knows a fine wine when he tastes it. In Oregon wine country, he is known as the legal advocate for wineries. Hermann concentrates his practice in environmental and winery law.

During any given day, Hermann receives calls that range from people interested in starting a winery to 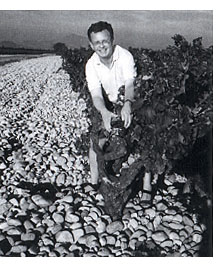 wineries with complex business problems to winemakers looking for advice on acquiring their own winery. To answer many inquiries into the wine business and steer people away from common problems, Hermann has compiled a spiral bound notebook, 'Legal Issues Affecting Oregon Wineries and Vineyards.' He has given away dozens of copies. For those people who call with problems, Hermann is always willing to listen and help them through the legal process.

More and more people are coming to Oregon and buying land, creating wineries or buying established ones, and legal issues plus serious money exist in the midst of all these transactions. Hermann heads the Stoel Rives wine law practice group, which recently completed work on the Canadaigua acquisition of Columbia Winery. 'It's a really good example of the fact that the wine industry is a big business in the Northwest now.'

Hermann is involved in work for some 35 wineries in Oregon, Washington and California, as well as two foreign companies with wineries in Oregon, Domaine Drouhin Oregon and Weingut Dr. Loosen. The latter is a German winery that at Hermann's suggestion entered into a joint venture with the Northwest winery Stimson-Lane (Chateau St. Michelle) to produce international class Riesling in Washington. Some of the wineries he and his growing group within Stoel Rives have worked with are Adelsheim, Cameron, Domaine Serene, Duck Pond, Elk Cove and Sokol Blosser. The practice extends from assisting small start-ups such as Antica Terra Winery to working with Northwest industry giants such as Columbia Winery (aka Corus Brands).

'Winemaking is a business, but in Oregon it is more. It is also the art of imprinting a special place on the wine. In addition to the creative challenges, wineries also face a wide array of business law problems,' Hermann explains. Typical issues include water rights, property rights, land acquisition, land use, trademarks, employment, finance and setting up the legal structure for the business. Hermann enjoys guiding people through the legal processes. 'As a lawyer, you constantly get to see new issues, and it's phenomenally interesting to see what pops up in wine country.'

Hermann got interested in wine as a youth growing up in Corvallis. 'I remember hearing about family friend David Adelsheim and how he wanted to start a winery.' Hermann's parents, who are both German, were interested in wine and in the '60s and '70s visited the early wineries. 'Even I remember when there were only four wineries in Oregon.' The wine industry was in its infancy when Hermann went away to college. He studied in Germany and Switzerland and received his bachelor's degree at Bowdoin College in Maine in 1976. He received his law degree from the University of Oregon with an environmental and natural resources certificate in 1981. Hermann noticed the Oregon wine industry was already growing at this time. However, he began practicing law in Colorado and -didn't return to Oregon until 1987.

'Something enormous had happened,' Hermann remembers. 'The pioneer wineries had gotten something tremendous going, and they were doing it in an Oregon way.' Hermann then met John Paul from Cameron Winery and Adelsheim while their daughters attended the French-American School. Stoel Rives had become involved in representing wineries by this time too.

'There weren't really attorneys who were working with winery problems,'' says Paul. Hermann saw the need to provide advice on specialty issues and to advise members of the growing wine industry as transactions grew more complex. In the early 1990s, Hermann guided Tualatin Vineyards to a successful merger with Willamette Valley Vineyards. He began to see winery and vineyard transactions that looked more like typical commercial transactions.

'People began asking for the same type of assurances, indemnities, representations and warranties. They wanted the same due diligence process to make sure all the pieces are there to run a business.' Now Hermann has relationships with many wineries, and he gets to work with people he knows and likes. 'Winemakers are exciting people to know and wonderful, generous friends to have.'

Linda Campillo, a Portland free-lance writer, is a frequent contributor to the Bulletin.