Fifty years after he began practicing in Oregon, Vernon D. Gleaves is one of the state's most revered attorneys. 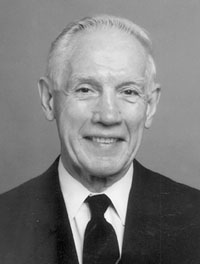 This fall the Eugene lawyer received the Oregon State Bar's highest honor, the Award of Merit. The award recognizes outstanding contributions to the bar, bench and community by individuals who exhibit the highest standards of professionalism.

Gleaves has devoted much time and effort to advance his chosen profession, and tries to emphasize to other lawyers how the public perceives them. He notes it is often said that '90 percent of people distrust lawyers, but 100 percent think their own attorney is honest.' He thinks it's a case of a few bad players casting a cloud over the rest. He tries to help lawyers understand that the way they conduct themselves as an individual reflects on the rest of the bar.

In the past decade, Gleaves is best known for his work on the Oregon Judicial Department-Oregon State Bar Joint Committee on Trial Court Judicial Resources, which, since he began chairing it in 1994 has commonly been called the Gleaves Committee. His committee is charged with developing formal recommendations, based on objective criteria, of how many new judgeships are needed around the state.

While Gleaves was a member of the OSB Board of Governors, he served as liaison to the special committee that drafted rules for the first Minimum Continuing Legal Education. 'I think that that was a great accomplishment for the bar, to ensure the competency of Oregon's lawyers,' he says.

In the early 1990s, Gleaves was a member of the subcommittee that drafted rules to establish the OSB House of Delegates, based on the one-person, one-vote principle that set up districts throughout the state represented by lawyers from each district. Having a House of Delegates was an advance for fairness in voting on matters that affected all OSB members, he says.

Born in Iowa, Gleaves and his family moved to the Beaver State when he was 10. During his stint in the Navy, Gleaves met an officer who was a lawyer in Chicago, and he traces that event to his own decision to pursue the law. After completing his bachelor's and law degrees from the University of Oregon, Gleaves became an assistant attorney general for the state for three years. In 1954, he entered private practice by joining a firm that eventually became Gleaves, Swearingen, Larson, Potter, Scott & Smith in Eugene.

His practice has emphasized real property transactions, general corporate law, estate planning and probate, including trusts and wills. He advises clients on all matters related to real properties and to estate planning, and has substantial expertise in probate practice and procedure.

His bar activities and awards are too numerous to list, but include being a life fellow of the American Bar Foundation; member of the American Judicature Society; member of the OSB sections on Business Law, Estate Planning & Administration, and Real Estate & Land Use; member, founding director and former president of the Oregon Law Foundation; and member and past president of the Lane County Bar Association.

Gleaves has received several awards of recognition from the Lane County Bar Association, and in 1997, was the recipient of the Oregon Judicial Conference Resolution in Appreciation Award. Firm colleague Thomas P.E. Herrmann says when members face difficult ethical or legal issues, they turn to Gleaves: 'Throughout his long tenure with our firm, Vern has been a leader, a teacher and the model upon which all of us have tried to mold our practices.'

Gerry Gaydos, who chairs the executive committee of the OSB Business Law Section, adds, 'He has been a mentor and role model for many lawyers, and has brought a sense of professionalism to the practice of business law.' Eugene lawyer Rohn M. Roberts points out Gleaves' 'many contributions of time and resources to worthy causes  not the least of which has been his tireless efforts in support of the Campaign for Equal Justice.' Robert H. Fraser, a Eugene attorney, says Gleaves 'believes passionately that the law is a profession, not just a business, and he is keenly aware of the obligations of a lawyer to serve his community.'

For his part, Gleaves explains simply: 'I like to be involved. I've always been proud to be a lawyer, and always felt we owed a duty to try to improve the profession. That has been my primary motivation.' He insists the advantages of involvement outweigh the drawbacks, citing examples such as being able to cross paths with people throughout the profession, including 'most of the presiding judges in the state. It has given me a better understanding of their problems in maintaining operations of the courts.'

Gleaves, who snow skied for many years and enjoys gardening with his wife, is 'the epitome of a business lawyer in service to his community and state,' observes Judge David V. Brewer of the Oregon Court of Appeals. 'He represents everything that is right about who we are and, especially, who we aspire to be.'