Hawaii was still a territory for the first five years of Thomas J. Matsuda's life. A third-generation Japanese American raised in Hawaii, he entered college in the early 1970s, a time when a significant renaissance of native Hawaiian culture was blossoming.

That revival became the lure that pulled him into pursuing a legal career. 'My father had encouraged me from a young age to move in that direction,' recalls the new executive director of Legal Aid Services of 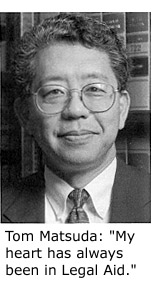 Oregon. 'But I had no interest.' His views changed when he came to understand that the issues surrounding Hawaiian sovereignty had many legal components. 'That's why I applied for law school, to do something to help the native Hawaiian community and, in general, the vulnerable communities in Hawaii.'

After earning his bachelor's degree from the University of Hawaii and his law degree from Hastings College of Law in San Francisco, Matsuda spent the first seven years of his law practice working with the Legal Aid Society of Hawaii. His main focus was land and housing rights for native Hawaiians, and he also practiced general legal services such as eviction defense and public housing cases.

In 1988, Matsuda and his wife, Sheila, who went to high school in Lakeview, Ore. (they met while each was living in Japan), moved to Oregon. She wanted to be nearer her family, and he was willing to make a fresh start. After passing the bar exam here, he landed a job with Kell, Alterman & Runstein in Portland, where he helped expand that firm's work in representing Japanese-owned companies operating in America.

Matsuda credits the late Cliff Alterman with being his mentor in these areas, Alterman having spent many years working with and representing Japanese companies in Oregon. At Kell Alterman, Matsuda spent much of his time 'doing a lot of explaining' cultural differences, both to the companies and to Oregonians who worked with them. 'That was a really rewarding part of the job,' he recounts.

By 1997, Matsuda had become managing partner at the firm. His background in management served him well, he says, in preparing for his new position at Legal Aid, which he started Jan. 1 of this year. In Hawaii he had managed Legal Aid's 66-person staff and $2 million annual budget. 'Managing attorneys can be a tricky business,' he admits, as they tend to be independent, 'smart and strong-willed.' It's a task that's been compared to herding cats, he adds. 'But it's an honor to be working with attorneys and staff who are so good at they do.'

His decision to seek and accept the Legal Aid job surprised his colleagues at Kell Alterman, says firm member Charles R. Williamson III. 'It's sad to lose him.' But, Williamson adds, 'He's absolutely dedicated to that cause. He really does want to pursue public service rather than private practice. He was very well-respected and well-liked, by us and by his clients. We hope he'll someday come back.'

'My heart has always been in Legal Aid,' Matsuda reflects. 'It's the reason I went into law to begin with, and that really never changed.' He admits the decision wasn't easy. For one, the income would be lower: 'I basically took a risk that I would be able to make it.' But he says anyone who knows him understands that money isn't a top priority for him. 'The hardest part by far,' he says, was having to stop working with his colleagues at Kell Alterman and give up his client relationships.

Now he heads an organization that is the largest and covers the broadest geographic territory of any low-income civil legal services agency in Oregon. He says the most pressing issue for his and similar organizations is 'the lack of sufficient resources to serve our client population.' He adds that this includes not just funding. It also means trying to link clients, many of whom have complex legal needs, with lawyers who have the appropriate expertise. That's why Legal Aid must work closely with the Oregon State Bar and local bar groups to explore ways to make the best use of the resources available, he says.

Many of the kinds of cases Legal Aid handles require very specialized areas of law that are not always handled by private law firms, such as cases related to public benefits (public housing, welfare, Social Security, etc.) and domestic violence and sexual assault cases. 'The best advocates in those areas are the Legal Aid attorneys in our offices who specialize in those areas. Many have 20 years of experience and are known nationally. But we just don't have enough of them to handle the overwhelming demand,' Matsuda says.

Matsuda joined the board of Multnomah County Legal Aid when he first moved to Oregon, so he has a good perspective of how our legal community stacks up with others in supporting legal aid to the impoverished. He says it's important for the profession that lawyers and firms participate on boards and in pro bono work: 'The members of the (Oregon) bar as a whole are really extraordinarily supportive compared to the rest of the United States.' +

Cliff Collins is a Portland free-lance writer and a frequent Bulletin contributor.