Obviously, wasting time isn't something Moskowitz cottons to. Which is what led him to assume his latest conservation-oriented job, with a group that tries to save healthy salmon runs before they become endangered. Appointed this year as director of The Wild Salmon Center's Cascadia biodiversity 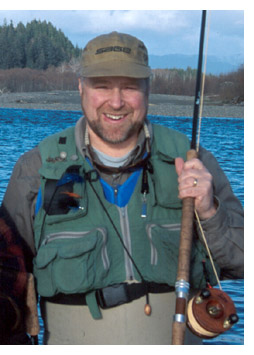 program, Moskowitz has teamed up with an old fishing buddy, Guido Rahr, the Portland-based nonprofit organization's president, at the only international salmon and steelhead conservation group in the Western Hemisphere.

The Wild Salmon Center takes a somewhat different approach from most other groups fighting for fish: It seeks out the 'last, best' streams around the Pacific Rim to try to preserve healthy fish runs before they get to the stage of being designated threatened or endangered.

As a conservationist, Moskowitz was to the manner born. 'I spent my youth romping around the fields and woods' in rural Pennsylvania, he says. He helped tend the families' livestock, cut hay, was an active Boy Scout, and by his late teens also was climbing mountains and snow skiing. 'I developed a very strong liking for being outside.'

After completing Pennsylvania State University, he taught for four years in a Connecticut prep school for learning disabled and dyslexic youth, stressing outdoor education and environmental service. One of his class's projects was to study the siting of a hydroelectric dam on a river. He listened to hearings and talked with some of the lawyers representing groups opposing the dam. Moskowitz came out of the experience wanting to go to law school. He had entered teaching thinking he could inspire respect for the natural world, and he decided that, with a law degree, 'I could have a bigger impact, more quickly and more directly.'

He applied to environmental law programs across the country, but seeing a picture on the Northwestern School of Law at Lewis & Clark school catalog, with the standard gorgeous view of Mount Hood from the Rose Garden, made the choice an easy one. On his first day of classes, he met Leslie Bottomly. 'It happened fast,' he recalls. 'I was totally smitten.' Two years later, he married Bottomly, now an employment attorney and a partner at Ater Wynne.

Moskowitz 'loved' law school, too, even though he failed the bar exam on the first attempt. But he got a job anyway, as executive director of the Association of Northwest Steelheaders. He had already paid to take the bar exam again, hadn't been studying for it because he was working full time, but passed anyway, probably because, by then, 'the pressure was off,' he surmises.

His next two stops were at the local groups Oregon Trout and the Native Fish Society, where he learned how to hold his own against the rapids of politics, economics, personalities and all of the other slick rocks that fighters for fish face. In 1996, he moved into the even more treacherous waters of the public sector: He became a member of the team working for the National Marine Fisheries Service whose job was drafting regulations, habitat designations and Endangered Species Act listings.

This was during the time when Gov. John Kitzhaber was putting together his Oregon Plan to try to head off ESA listings for the Oregon coho. Moskowitz says there was much internal division within his agency over the question of whether Oregon should get the chance to work out its own solution without having the ESA imposed by the federal government. The agency gave the state the OK, but environmentalists sued, then a year later won in court. It was a tough time for the agency, he says, with many dedicated people impeded by bureaucratic fish ladders to leap.

Once the coho gained listing, the Portland area needed someone to direct fish-saving efforts in the region. Metro, the agency charged with that task, chose Moskowitz. He toiled at Metro for a couple of years, but was persuaded when Rahr made the long promised 'offer you can't refuse': to join him at The Wild Salmon Center. 'While I enjoy working with public agencies, I feel more at home in a private, nonprofit,' Moskowitz says. 'It allows me to be more creative.'

He will need all the creative talent he can muster in such challenges as trying to persuade rural Oregonians along the coast that their interests in making a living and avoiding flooding should and do coincide with preserving fish runs. Facing those endeavors, Moskowitz prizes his legal training. 'Even though I've never taken a deposition or been in front of a judge, I definitely use my legal skills every day in my career.' +