Basketball officials call it 'selling the call.' 'To sell the call is to make the call in a way that shows the world that you know what you're doing,' explains Oregon Supreme Court Justice W. Michael Gillette.

Gillette knows a thing or two about the subject: He has served as both a judge and a high school referee simultaneously since 1977. That was the year then-Gov. Bob Straub appointed him to the Oregon Court of Appeals, fulfilling his longtime ambition to become an appellate judge. The job also left his evenings free, unlike when he was a practicing lawyer.

He read in the Salem newspaper that high schools needed people to officiate basketball games. He had watched his two 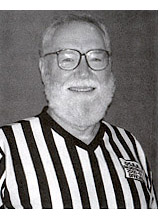 younger brothers referee high school games, and the idea interested him. 'It was a good opportunity, because I wasn't working day and night as I had been in my practice,' Gillette recalls. He signed up, and immediately fell in love with officiating.

Gillette was 35 when he started calling games. This year he turns 60, and he's still at it, working 30 to 40 boys' and girls' games each year. And he has no plans to give it up: 'As long as I can continue to negotiate a contract with my knees, I'm willing to do this.'

Gillette's dual affections for basketball and the law began early in life. Raised in Milton-Freewater, he was a good basketball player on a state championship team at McLoughlin Union High School, where he graduated as valedictorian. At Whitman College in Walla Walla, Wash., the 6-foot-2 Gillette played two years on the team, but gave it up after running into players who were 'a lot bigger and better' than he was.

At Whitman, where he graduated with honors, majoring in political science and German, Gillette's previous interest in becoming involved in public life was further sparked by 'a particularly wonderful teacher' in a course on constitutional law, he recalls. At the age of 19, he set the goal of becoming an appellate judge, though he stresses: 'I did not have any plan about how it would occur. I just said, 'I'd like to be one of those.''

His participation on the hardwood was limited to pickup games during his time at Harvard Law School and stints at Rives and Rodgers law firm, the Multnomah County district attorney's office, the attorney general's office in American Samoa and the Oregon Department of Justice (where he was an assistant attorney general). Gillette served on the Court of Appeals until 1986, when then-Gov. Vic Atiyeh appointed him to the Oregon Supreme Court.

Gillette sees many parallels between the two types of courts he presides over. He remembers as a player how much he respected those who enforced the rules, and how playing by the rules 'gave a sense of security and fun.' Roundball is a microcosm of the way the world works under the rule of law, he says. He also applies the trial concept of harmless error: 'No harm, no foul' - that is, the law doesn't need to intervene over every little bump.

His on-court and in-court personas differ. 'I'm an animated participant on the bench,' he offers. 'Oral argument is designed to help the judge figure out the answer to the case. In order to do that, you have to discuss.' But on the basketball floor, he admits he consciously tries to stay subdued. The focus, he feels, should be on the players and the game, not the referees: 'I try to deliver the mail. Nobody came to see me officiate. The perfect game is if they don't remember you, they don't remember who officiated the game.'

Youth sports officials increasingly are under attack, often literally, from parents, coaches and fans. Gillette concedes: 'There has been kind of a shift in mood, a sort of ugliness arisen. ... More than there used to be.' Sportsmanship and teamwork are falling prey to individual achievement, but such attitudes nearly always come from the parents, not the players themselves, he says. And in the mostly small towns where he calls game in the Salem area, rare perpetrators usually are squelched, he adds.

Gillette regards basketball at its best as 'a great expression of American thinking. It combines teamwork with individual skills.' He also believes the high school level is the purest form of that expression, because kids mostly play for the fun, and 'are still coachable; you can talk to them. You can talk to the coaches.' He recognizes that coaches know he is a Supreme Court justice, which helps when he tries to sell a call.

Sometimes, though, even a referee-judge makes mistakes. 'The crowd will tell you when you're wrong,' he says. 'You can change your call, and you ought to' when you miss something. Though Gillette is one of the most senior of officials in his league, he remains modest: 'I'm not a great official. I'm simply a journeyman official. It's like the law - you continue to learn as long as you do it.' +