If you choose to drink too much alcohol then don't choose to drive, says Peter Glazer, who has spent a good 20 years advocating against drunk drivers. Glazer, a Lake Oswego attorney, was an undergraduate at the University of Oregon when he was involved in an accident caused by a drunk driver. If the accident had occurred a split second earlier, two college students could have been killed or seriously injured. Afterward, the criminal case was plea-bargained; Glazer assumed such a crash was a rare situation, so he didn't think much about it.

But after finishing UO law school in 1978, he started working as a deputy district attorney in Clackamas County, facing a huge backlog of drunk driving cases. The prosecution of DUIIs in many counties had been postponed as the Oregon Supreme Court considered constitutional issues in Brown vs. Multnomah County. 'It was a real eye-opener for me,' says Glazer.

'I had simply lived under the belief that what happened to me in 1972 was an isolated incident, but what I saw as a deputy DA was an epidemic of thousands of drunk driving offenses.'' At the time, drinking and 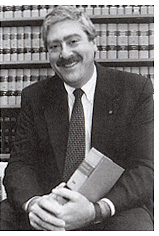 driving were socially acceptable. In 1982, when Glazer started his own private practice, public attitudes toward drunk drivers were changing. Mothers Against Drunk Drivers (MADD) started organizing the year before, and Glazer got involved in helping the newly formed chapter in Washington County where he lived.

Drunk driving was becoming a hot topic in 1982 - cover stories appeared in Time and Newsweek. Gov. Victor Atiyeh appointed the Governor's Task Force on DUII, and Glazer was named its youngest member. Retired Oregon Supreme Court Chief Justice Arno Denecke was the first chair of the volunteer citizen group. 'We began to put together a package of legislation to step up Oregon's battle against drunk driving,'' Glazer recalls. 'We really overhauled the DUII laws during the 1983 legislative session.''

The task force became the Governor's Advisory Committee on DUII, and Glazer served as chair of the committee under four Oregon governors from 1986 to 1999. During the past year, Glazer, 48, has received awards for his 17 years of volunteer service on the committee and for his work against drunk driving. The National Commission Against Drunk Driving, formerly the Presidential Commission on Drunk Driving, recognized Glazer with its Finalist's Award for exceptional efforts to stop drunk driving. He also received the Crystal Award from Oregon's traffic safety manager.

'What he brought to the table was the insight of the people who were on the plaintiff's side  the trial lawyer's approach for the victims,'' says Jerome Cooper, a Multnomah County Circuit Court judge pro tem. Cooper has served on the governor's committee with Glazer and became chairman when Glazer stepped down. Glazer was instrumental in getting laws in place that suspended a person's driver's license for refusing to take a breath test. He also urged the legislature not to weaken the dram shop law that holds alcohol servers such as bars, taverns or social hosts responsible for serving people who are visibly intoxicated. Glazer, who represents personal injury victims in civil cases, 'has been very strong in his beliefs and convictions,'' Cooper adds. 'He's always been a leader and brings people together. He encourages people to give of themselves.''

The Governor's Advisory Committee successfully advocated passage of a bill during the 1999 legislative session that gives felony treatment to repeat drunk drivers, an idea Glazer pursued for a decade. After that session, Glazer decided to step off the committee as it felt like a good time to leave. 'The number of highway deaths was down dramatically in 1999, and with the passage of the felony DUII law, I felt I could leave on a high note,' he says. Glazer continues his private practice, Glazer & Associates, on Kruse Way with a focus on personal injury, divorce and civil litigation. He and his former partner, Steve Maurer (now a Clackamas County judge), were the first lawyers on Kruse Way in 1985. Glazer remains active in Lake Oswego Rotary and the Royal Rosarians and hopes to serve again on a state board or commission.

Although public attitudes toward drunk driving have changed dramatically since Glazer became an anti-drunk driving advocate, he says much more work needs to be done. 'Until the last innocent person dies at the hands of a drunk driver, there's work to be done.'

Right now too many drunk drivers still think they are not likely to get caught, and, if they do, that they will get a light sanction. It's not until their fourth conviction in a 10-year period that they get felony treatment, Glazer says. The felony DUII law was expected to affect 600 cases a year, evidence of a serious problem with repeat offenders. 'It's surprising that there are so many people with so little regard for others.'

Linda Campillo is a Portland-area free-lance writer and frequent contributor to the Bulletin.