OSB Board of Governors

Board of Governors Election 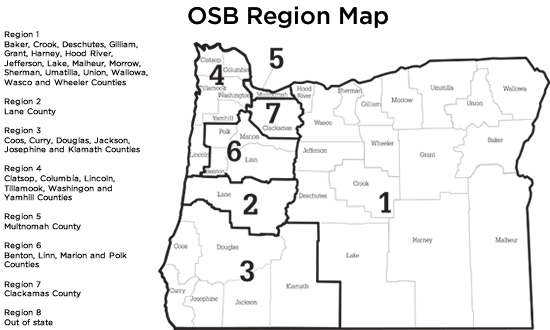 Oregon State Bar Board of Governors

The Board of Governors governs the bar, determines the general policies of the bar and approves its budget each year. The Executive Director, appointed by and acting under the supervision of the Board, implements, administers and supervises the bar's operation and program activities.

The Oregon State Bar is governed by a Board of Governors consisting of fifteen lawyers elected from eight regions, four public members appointed by the board, and the non-voting position of Immediate Past-President.

Pursuant to ORS 9.080(1), the board is charged with the executive functions of the state bar and "shall at all times direct its power to the advancement of the science of jurisprudence and the improvement of the administration of justice." The board has authority to "adopt, alter, amend and repeal bylaws and to adopt new bylaws containing provisions for the regulation and management of the affairs of the state bar not inconsistent with law."